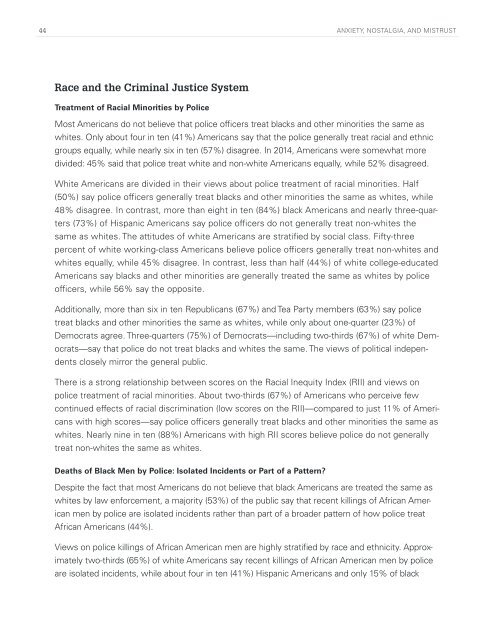 Race and the Criminal Justice System

Treatment of Racial Minorities by Police

whites. Only about four in ten (41%) Americans say that the police generally treat racial and ethnic

groups equally, while nearly six in ten (57%) disagree. In 2014, Americans were somewhat more

White Americans are divided in their views about police treatment of racial minorities. Half

(50%) say police officers generally treat blacks and other minorities the same as whites, while

48% disagree. In contrast, more than eight in ten (84%) black Americans and nearly three-quarters

same as whites. The attitudes of white Americans are stratified by social class. Fifty-three

whites equally, while 45% disagree. In contrast, less than half (44%) of white college-educated

officers, while 56% say the opposite.

treat blacks and other minorities the same as whites, while only about one-quarter (23%) of

that police do not treat blacks and whites the same. The views of political independents

police treatment of racial minorities. About two-thirds (67%) of Americans who perceive few

treat non-whites the same as whites.

Deaths of Black Men by Police: Isolated Incidents or Part of a Pattern?

whites by law enforcement, a majority (53%) of the public say that recent killings of African American

Views on police killings of African American men are highly stratified by race and ethnicity. Approximately

are isolated incidents, while about four in ten (41%) Hispanic Americans and only 15% of black