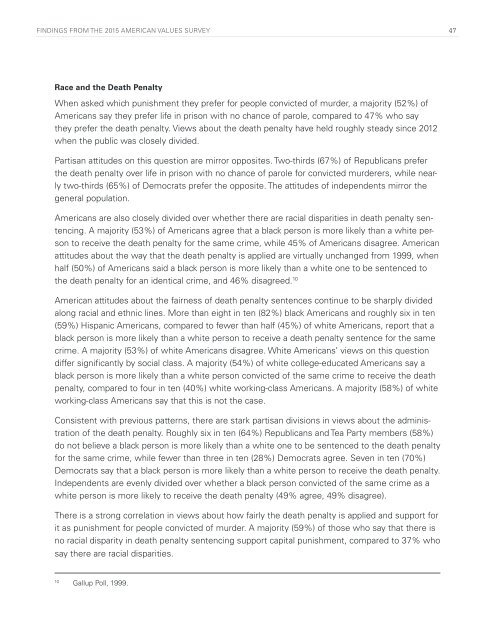 FINDINGS FROM THE 2015 AMERICAN VALUES SURVEY 47

Race and the Death Penalty

When asked which punishment they prefer for people convicted of murder, a majority (52%) of

Americans say they prefer life in prison with no chance of parole, compared to 47% who say

when the public was closely divided.

Partisan attitudes on this question are mirror opposites. Two-thirds (67%) of Republicans prefer

the death penalty over life in prison with no chance of parole for convicted murderers, while nearly

two-thirds (65%) of Democrats prefer the opposite. The attitudes of independents mirror the

Americans are also closely divided over whether there are racial disparities in death penalty sentencing.

to receive the death penalty for the same crime, while 45% of Americans disagree. American

attitudes about the way that the death penalty is applied are virtually unchanged from 1999, when

the death penalty for an identical crime, and 46% disagreed. 10

along racial and ethnic lines. More than eight in ten (82%) black Americans and roughly six in ten

(59%) Hispanic Americans, compared to fewer than half (45%) of white Americans, report that a

differ significantly by social class. A majority (54%) of white college-educated Americans say a

penalty, compared to four in ten (40%) white working-class Americans. A majority (58%) of white

working-class Americans say that this is not the case.

Consistent with previous patterns, there are stark partisan divisions in views about the administration

of the death penalty. Roughly six in ten (64%) Republicans and Tea Party members (58%)

Democrats say that a black person is more likely than a white person to receive the death penalty.

it as punishment for people convicted of murder. A majority (59%) of those who say that there is

no racial disparity in death penalty sentencing support capital punishment, compared to 37% who

say there are racial disparities.