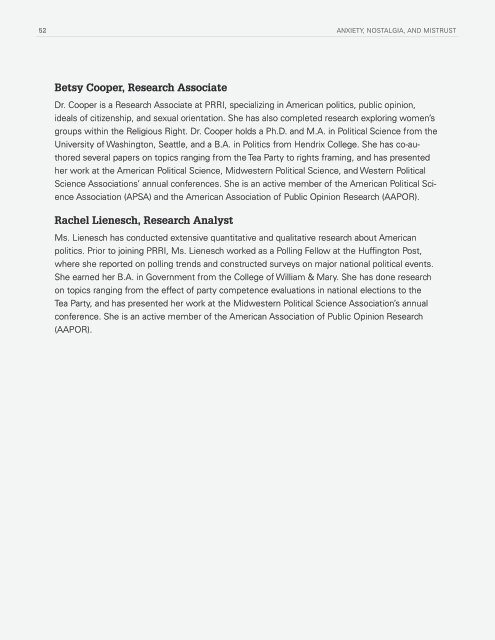 ideals of citizenship, and sexual orientation. She has also completed research exploring women’s

groups within the Religious Right. Dr. Cooper holds a Ph.D. and M.A. in Political Science from the

University of Washington, Seattle, and a B.A. in Politics from Hendrix College. She has co-authored

several papers on topics ranging from the Tea Party to rights framing, and has presented

Science Associations’ annual conferences. She is an active member of the American Political Science

politics. Prior to joining PRRI, Ms. Lienesch worked as a Polling Fellow at the Huffington Post,

where she reported on polling trends and constructed surveys on major national political events.

She earned her B.A. in Government from the College of William & Mary. She has done research

Tea Party, and has presented her work at the Midwestern Political Science Association’s annual

conference. She is an active member of the American Association of Public Opinion Research