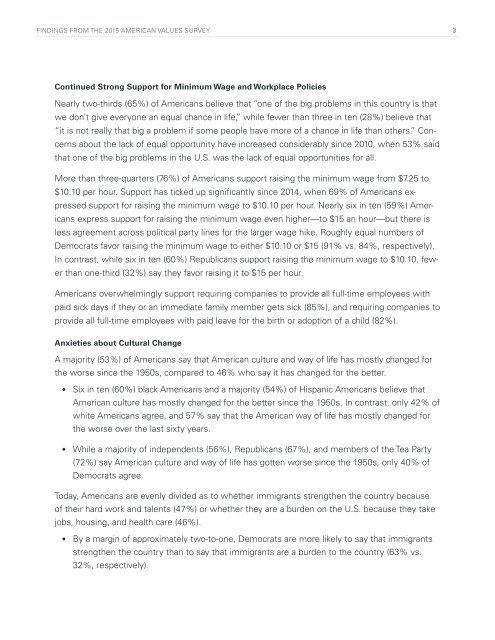 FINDINGS FROM THE 2015 AMERICAN VALUES SURVEY 3

we don’t give everyone an equal chance in life,” while fewer than three in ten (28%) believe that

“it is not really that big a problem if some people have more of a chance in life than others.” Concerns

about the lack of equal opportunity have increased considerably since 2010, when 53% said

that one of the big problems in the U.S. was the lack of equal opportunities for all.

More than three-quarters (76%) of Americans support raising the minimum wage from $7.25 to

support for raising the minimum wage to $10.10 per hour. Nearly six in ten (59%) Americans

In contrast, while six in ten (60%) Republicans support raising the minimum wage to $10.10, fewer

paid sick days if they or an immediate family member gets sick (85%), and requiring companies to

provide all full-time employees with paid leave for the birth or adoption of a child (82%).

the worse since the 1950s, compared to 46% who say it has changed for the better.

American culture has mostly changed for the better since the 1950s. In contrast, only 42% of

white Americans agree, and 57% say that the American way of life has mostly changed for

the worse over the last sixty years.

Today, Americans are evenly divided as to whether immigrants strengthen the country because

of their hard work and talents (47%) or whether they are a burden on the U.S. because they take

• By a margin of approximately two-to-one, Democrats are more likely to say that immigrants

2 ANXIETY, NOSTALGIA, AND MISTRUST Americans’ Gloomy Economic Outlook Persists Americans continue to have a bleak outlook about the economy. More than seven in ten (72%) Americans believe that the country is still in a recession, while roughly one-quarter (27%) believe the economic recession is over. Americans’ views about the economic recession have remained steady over the last few years, with an identical percentage (72%) of Americans saying the country was still in a recession in 2014, and 76% saying the country was still in a recession in 2012. Americans have become more pessimistic about the country’s future than they were just a few years earlier. Today, Americans are evenly divided over whether America’s best days are ahead of us (49%) or behind us (49%). In 2012, a majority (54%) of the public said that America’s best days were ahead, while fewer than four in ten (38%) said that they were behind. No group expresses greater pessimism about America’s future than members of the Tea Party. Only one-third (33%) of Tea Party members say that the country’s best days lie ahead, while about two-thirds (65%) say they are in the past. Perceptions about America’s future vary by religious affiliation. Among religious groups, white evangelical Protestants and white mainline Protestants are markedly more pessimistic than other groups, with majorities believing that America’s best days are behind us (60% and 55%, respectively). By contrast, majorities of Americans who are affiliated with non-Christian religions (55%), Catholics (56%), black Protestants (57%), and religiously unaffiliated Americans (58%) all believe America’s best days are ahead of us. Americans’ increasing pessimism about the direction of the country is reflected in their views about prevalent problems within their local communities. The number of Americans citing crime, racial tensions, and illegal immigration as major problems increased substantially between 2012 and 2015. • The number of Americans saying crime is a major problem in their community jumped 15 percentage points (up from 33% to 48%), while the number of Americans saying racial tensions are a major concern jumped 18 percentage points (from 17% to 35%). • The number of Americans saying illegal immigration is a major problem ticked up 8 percentage points (from 28% to 36%). In order to provide an overall measure of Americans’ attitudes about the fairness of the economic system in the U.S., we created an Economic Inequity Index (EII). Americans are skewed toward the top end of the scale. Nearly half (48%) of Americans perceive a great amount of inequity in the economic system, scoring very high on the EII. About one in five (21%) see a high amount of economic inequity, 20% see a moderate amount of economic inequity, and 11% perceive the economic playing field to be basically level, scoring low on the EII.