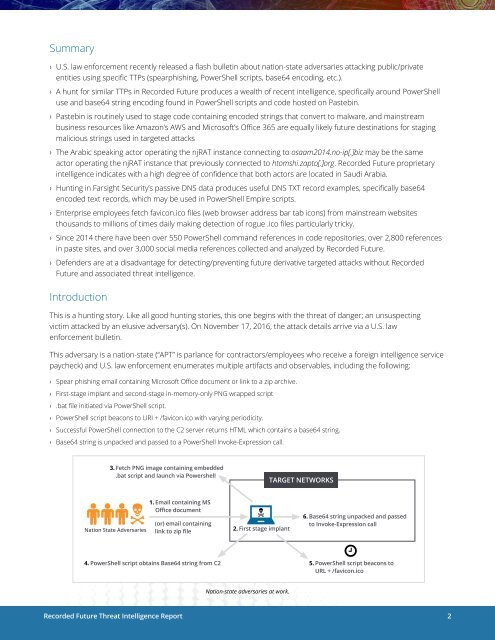 A hunt for similar TTPs in Recorded Future produces a wealth of recent intelligence, specifically around PowerShell

use and base64 string encoding found in PowerShell scripts and code hosted on Pastebin.

Pastebin is routinely used to stage code containing encoded strings that convert to malware, and mainstream

The Arabic speaking actor operating the njRAT instance connecting to osaam2014.no-ip[.]biz may be the same

intelligence indicates with a high degree of confidence that both actors are located in Saudi Arabia.

encoded text records, which may be used in PowerShell Empire scripts.

Since 2014 there have been over 550 PowerShell command references in code repositories, over 2,800 references

in paste sites, and over 3,000 social media references collected and analyzed by Recorded Future.

This is a hunting story. Like all good hunting stories, this one begins with the threat of danger; an unsuspecting

victim attacked by an elusive adversary(s). On November 17, 2016, the attack details arrive via a U.S. law

paycheck) and U.S. law enforcement enumerates multiple artifacts and observables, including the following:

Successful PowerShell connection to the C2 server returns HTML which contains a base64 string.

Base64 string is unpacked and passed to a PowerShell Invoke-Expression call.

.bat script and launch via Powershell

6. Base64 string unpacked and passed

Now you know, defender, that your first step is internal telemetry correlation (where possible) to identify previously undetected (hopefully this is not the case) intrusions. In addition to internal hunting, you should consider hunting for external intelligence that will help you identify future evolutions in these techniques and tool sets. To measurably decrease operational risk through savvy policies and security control improvements is no small matter. Further, this hunt must be productive to show your leaders that the unknown, often hiding in plain sight, can, with a little inspiration and motivation, hurt you and result in loss. So, grab your proverbial flashlight and let Recorded Future and our partners quickly lead the way toward illuminating the adversarial possibilities. Power to the Shell As we approach the close of 2016, email is, unfortunately, still a very viable initial exploit channel. To avoid creating a complete tome here, let’s skip email and malicious attachments, and focus our hunt on the post network breach adversarial tools and techniques that continue to experience broad success, specifically PowerShell, base64 encoding, favicons (web browser address bar tab icons), and DNS TXT records. Are you aware that PowerShell is celebrating its tenth anniversary? PowerShell’s importance continues to increase with every successive release of the Windows operating system, and system administrators everywhere find it an invaluable resource for granular host control at scale. Naturally, adversaries of all stripes find PowerShell equally appealing as a swiss army knife for accomplishing malicious objectives. The increase in PowerShell interest is approximated by searching for “PowerShell” and “Exploit” references in paste sites and code repositories over the past four years. Clearly 2016 is experiencing a surge in references as actors consider the possibilities. Recorded Future timeline illustrating the recent increase in “PowerShell” and “exploit” references split between code repositories and paste sites. Now our query criteria may be too crude an approximation resulting in too much noise. Fortunately, it’s relatively trivial to identify an example PowerShell attack script (if the paste has since been deleted, don’t worry, Recorded Future cached it) to narrow our criteria. Recorded Future Threat Intelligence Report 3 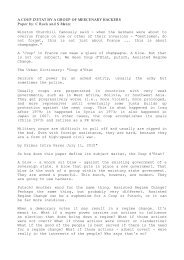 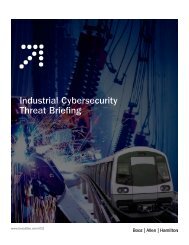 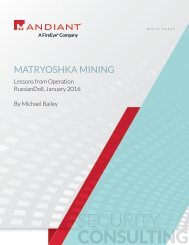 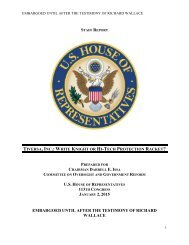 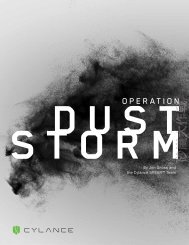 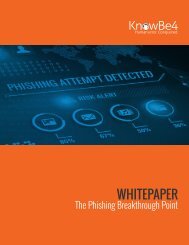 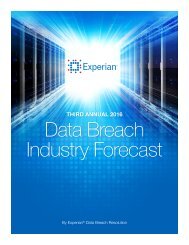 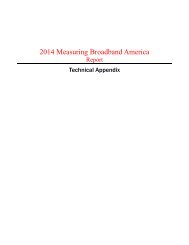 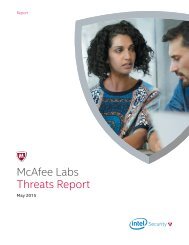 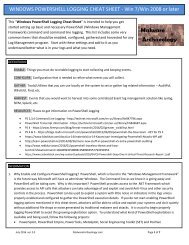 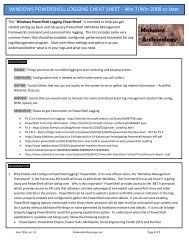 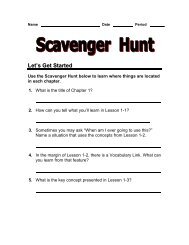 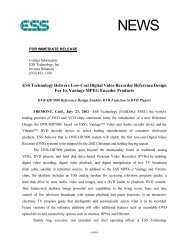 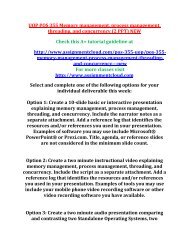 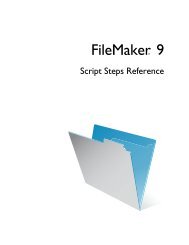 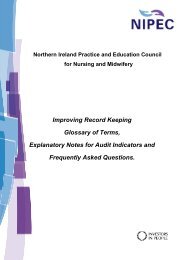 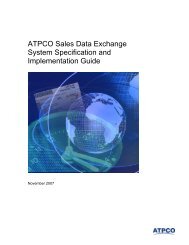