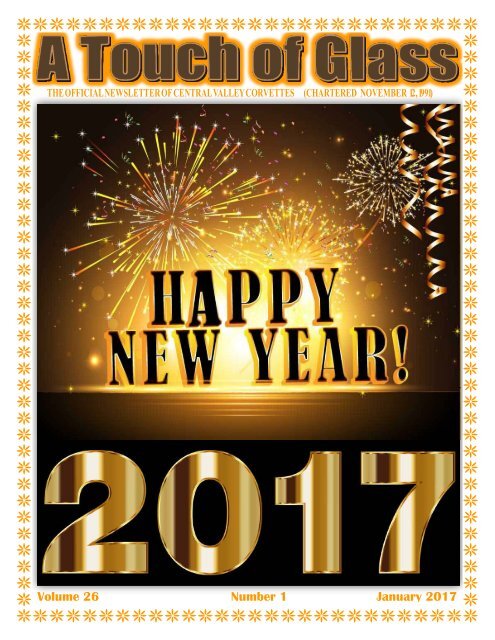 The Central Valley Corvette Club was

chartered in 1991 for the owners of the only

CORVETTE. It's a social organization with

activities that provide enjoyment for the true

OF EVERY MONTH AT YOSEMITE

MORE THAN WELCOME TO

ATTEND THE MEETINGS AND MEET

Eligibility for membership in CVC is

defined in Article III, section 1 of the

bylaws in part as follows: "Membership in

Central Valley Corvettes shall be open to all

Corvette owners who are sponsored by a

member in good standing. Additionally, a

prospective member must, within a three

dues and initiation fees, and be approved by

any general membership meeting by secret

Sponsors shall be responsible for advising

prospective member of results. All members

must submit proof of personal insurance in

accordance with California State Law upon

application for membership, and all

members must be a member of the

A prospective member who does not have a

sponsor will be provided one by the

not participate in more than three meetings

privileges at meetings (provided they are in

0153 or any officer on the following page.

you guys know that I am just so happy

to be your president. I think we're going

to have a great, great year. I have some

big shoes to fill but hopefully I can do as

well as Gary. He did a great job this year

and last year. Our new board is eager to

something that you would remember.

I’m also looking forward to having our

new members get involved with the

club and maybe put on a run. All you

have to do, if you're not sure how to put

on a run, is tap on the shoulder of one

of our members that's been here for a

I’m sure they would be too happy to

help you. I know you would enjoy it and

I’ve not a whole lot to say just yet

because we haven't done a whole lot yet

but all our Board wishes you a Great

See you all at the next meeting.

The General Meeting was called to order by

the November meeting were read by President

Pflepsen. Ruth Danielsen made a motion to accept

the minutes as read. The motion was seconded by

which was under budget. Tonight’s raffle raised

month’s run leaders give reports on their events

Lebda on the news), the Christmas Party with 71

attending. Diane Tjerrild thanked everyone for

their coat donations. The Hayride had 78 attending.

Several attended the Rogue One movie this

with the fact, during his reign, there were 35 runs in

activities can have no more than 35 runs each year

Charlotte gave a pat on the back for perfect

attendance in 2016 to the following; Andy & Connie

and Diane Tjerrild. 4 members did not renew their

membership so we stand at 91 members.

fines, his own! So he gave the rest of the club a free

The table arrangements for the meeting will be

correct next month. Management was filling in for

each other and lack of communication. We have

received a verbal yes from Ed Dena for sponsorship

– waiting for the check.

President. He announced there will be a Mystery

Tour. Andy has asked Mike Henenfent to run the

Raffle and Lynne Henenfent will be selling the raffle

tickets. Debbie Garrison will be doing the Sunshine

disease and made a plea that if anyone has a friend

or family member with a drinking problem to not

give up and keep trying to get the person help. The

next General Meeting will be Tuesday, January 17,

2017. The next Board meeting will be Tuesday,

to adjourn the meeting was made by Scott Parkin

and seconded by Fred Parks. Meeting adjourned at

Raffle: Thank you to the following members

CENTRAL VALLEY CORVETTES BOARD OF DIRECTORS

PLEASE REMEMBER TO WEAR YOUR NAME BADGES TO:

ALL MEETINGS, CLUB EVENTS AND RUNS (NOW a 50₵ FINE ea. without it)

SUPPORT YOUR CLUB RAFFLE AND BRING A RAFFLE PRIZE!

AND BE SURE AND RECOMEND OUR WEB SITE REGULARLY

HAPPY HOLIDAYS TO ALL MY CVC FRIENDS. WELL THIS WILL BE MY LAST

HURRAH FOR SUNSHINE AND CLOUDS AS MY JOB WILL BE DONE. THANKS TO

ALL OF YOU WHO HAVE CONTRIBUTED NEWS AND INFORMATION ABOUT

1. FROM LEIGH ANN SEVERANCE: SHE SAID SHE HAS NOTHING TO CONTRIBUTE

YEARS. YOU HAVE DONE A GREAT JOB AND I APPRECIATE IT.

2. GLENN AND LORRAINE HENDERSON: THEY HAVE GREAT NEWS TO SHARE.

THEY HAVE JUST LEARNED THAT THEY ARE GOING TO BE GRANDPARENTS

3. AND LAST BUT NOT LEAST: OUR GRANDSON, ZACHARY GRADUATED FROM

ARIZONA STATE COLLEGE LAST WEEKEND. ALL FAMILY, SUCH AS PARENTS,

FRIENDS AND GRANDPARENTS GATHERED TOGETHER FOR THIS SPECIAL

EVENT. THERE WERE 10,000 GRADUATES SO CEREMONIES WERE SPREAD OUT

OVER SEVERAL DAYS. ZACH GRADUATED FROM THE SCHOOL OF BUSINESS

WITH A MAJOR OF STATISTICAL MARKETING. HE HAS ACCEPTED A POSITION

SPRING. HE HAS RENOVATED A 1955 CHEVY BEL AIRE AND FOUND TIME TO

Central Valley Corvettes is a social organization and relies on meeting

and especially activities to provide a place or venue for that

The first year we had 40 Activities not counting meetings. In 1996 the

Club had 56 activities. A list of those activities is included to give you

some ideas. Activities require a little time, a little effort and a little work

and are more fun if you have several people helping you. Whether you

are having an activity in your home or are chairing a run of several days.

people helping with the preparation and for you the Leader.

We’ve had many great Runs. Some are grand affairs like the Opening of

The Corvette Museum or Central Coast Classic, the Hawaii Run and the

Cruise to the Mexico Riviera. We’ve been to the Coast, Sedona, Jerome,

the Grand Canyon, the Oregon Coast, and the Columbia River, to

Laughlin & Las Vegas, Sacramento, the South West Tour and the most

recent North West Tour. Some runs are just dinner runs, a trip to a

Museum, a drive in the Mountains or just Queen Haul, the point being a

your best friends. I’ve never been on a bad run!

of new members joining us during the year. Some Members stay for a

few years or until their priorities change, some stay forever. Others

leave and return and we are happy to have them back. Life changes and

CVC has changed with it.

Members and participation are the lifeblood of any organization

especially a social organization like ours. Recruit new members, lead an

activity or help with an activity, think about becoming a Board Member.

MYSTERY RUNS – THRU THE YEARS

I Will Not Wear

How a White 1982 Corvette Ended Up in Iceland

You never know where a Corvette is going to turn up.

Take, for example, this white 1982 Corvette that left the United States and today is

roaring along on the roads of Iceland!

The owner, Sigfus B. Sverrisson, has been around cars his whole life, thanks to his

grandfather – the man who founded the company that imported Volkswagens, Land

Rovers, and Audis to Iceland years ago.

years old, but it was on a trip to America that he fell in love with Corvettes.

into the parking lot. It was love at first sight for Sverrisson, who says the sports car

Once he returned home to Iceland, it took him 10 years, but he finally became one of

only two Corvette owners in the entire country at that time!

Now, he drives this white 1982 that he imported from America, prompting lots of curious

glances from fellow motorists in Iceland.

“When people see it they smile, they look at it and they wonder if they know Corvettes

at all,” Sverrisson says. That smile seems to be a universal reaction to

Corvettes. Enjoy this scenic video of driving his Corvette in Iceland.

hope everyone had an

yours. As Skip reported in the December newsletter, there was a total of 34 runs in

that we need to get to work if we are going to accomplish that. All kinds of runs are

welcome---movie runs, dinner runs, day runs, and overnight or longer runs. I would

especially like to encourage newer members to consider planning a run. If you need

help with the planning process, all you need to do is ask—there are plenty of “old”

members willing to help. We even have a handout on how to put on a run and if

you would like a copy just ask me. Remember runs are really what this club is about

and the more we do, the more fun we will have! DICK DANIELSEN

BOARD MEETINGS DAY & TIME TO BE ANNOUNCED

FIRST BOARD METING WILL BE HELD AT ANDY ANDERSON’S HOUSE

Sign up at the Jan meeting. Probably leave Fresno Sat the 4 th about 6:30am, first

call Skip or Andy. Bring sun screen and a hat.

Run start time and meeting location yet to be determined

For room reservations: Call the Montbleu Hotel at 800-367-4554. Reservations may also be made on line.

If making reservations on line refer to code STCVC17. By phone, use the same code or Central Valley

Reservations can be made anytime beginning in January.

On Wednesday, May 17, we will drive to Lake Tahoe via scenic Hwy. 88 and enjoy a group dinner that night at

On Thursday, May 18, we will take a leisurely drive to Virginia City and have lunch at the Bucket of Blood

Saloon. There will be plenty of time to shop and look around. Dinner will be on your own.

On Friday, May 19, we will cruise Lake Tahoe and visit a boat museum. Dinner will be on your own.

On Saturday, May 20, either drive home or stay and play another night!

I WANT YOUR CORVETTE

In the Clovis Rodeo’s

Judy’s Donuts in The Trading Post Center on the SE corner of Herndon & Clovis Ave.

We leave at 8:00 am to the parade staging area (Jefferson, just west of Sunnyside).

We MUST be in place on Jefferson before 8:25 am as they close all of the streets

in that area at that time.

We will wait on Jefferson approximately ½ to 1 hour until we are called on to line up.

ABSOLUTELY NO BURN-OUT OF TIRES. If one car spins its tires, we will all be escorted off

the parade route and never be invited back again. No throwing of candy or trinkets.

(Only walkers may hand out goodies). Yes, you MAY honk, wave, smile and sing!

We will meet up after the Parade at Red Robin, SE corner Shaw/Clovis for lunch / Ice Cream

Air National Guard base in Fresno

What a GREAT RUN to

Such a BEAUTIFUL Place! 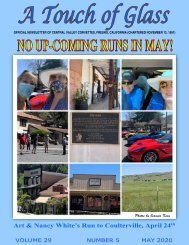 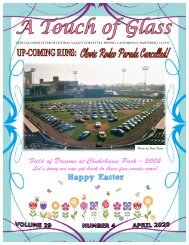 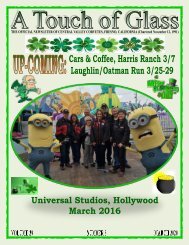 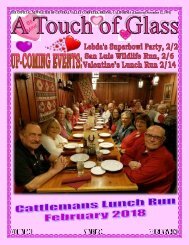 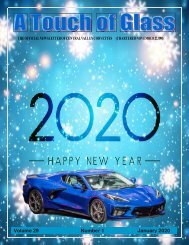 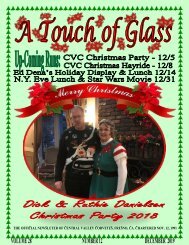 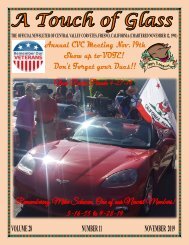 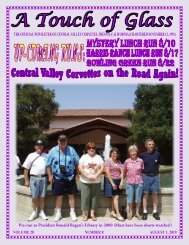 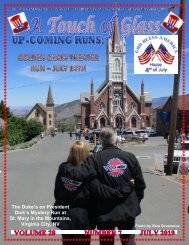 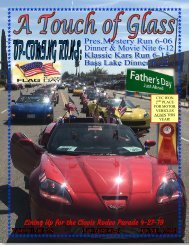 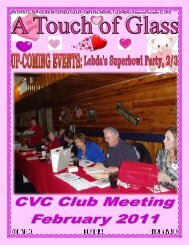 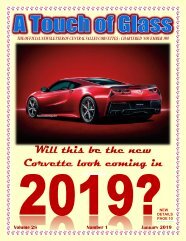 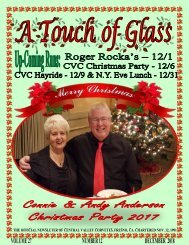 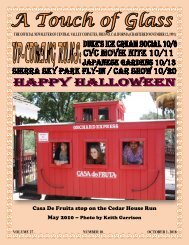 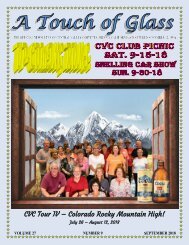 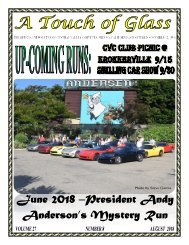 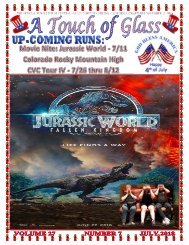 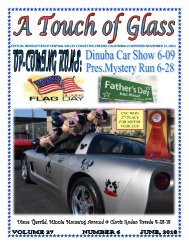 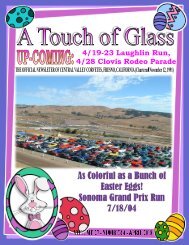 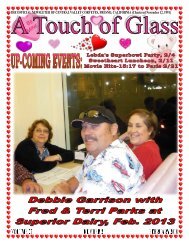 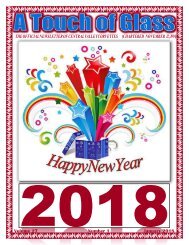 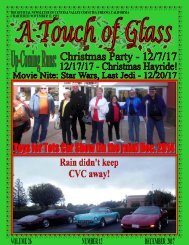