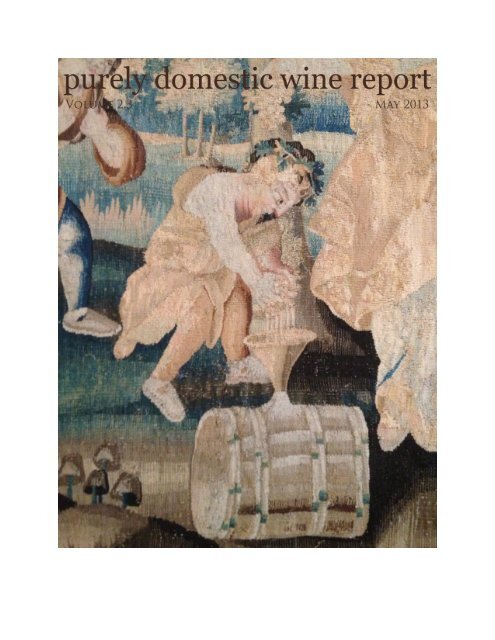 I think it likely that nowhere else in Napa Valley, if not the entire US could you

find a winery with more winemaking experience than Dyer Vineyards. Bill and

Sterling Winery in 1976 where he made wines for twenty years. Dawnine began

Domaine Chandon for a quarter-century. They built a home on the lower

reaches of Diamond Mountain in 1991 and planted their 2.2 acre vineyard in

produced and labeled, yet even then didn’t go commercial. I was fortunate to be

Deluca. A number of years passed since the last time tasting the wine and Bill

release. Realizing how important this event was, I suggested Dyer invite a couple

wine writers who I consider friends. We gathered with Bill and Dawnine in their

first tasting note for the winemakers. Because the source never changes, and

the varietal mix is essentially the same, Dyer has a unique signature to their

impressions. As distinctive and well made as the wines are upon release, I had

delicious, the tasting notes begin on the next page. doug wilder | pdwr

stable and optimal. For the most part I play it conservative, generally keeping drink range within a seven – fifteen year window. It is only

humbling. That came to pass when tasting a fifteen-year vertical of Bill and Dawnine Dyer’s eponymous jewel box of a vineyard on the

lower reach of Diamond Mountain. From the premiere 1997, and over subsequent vintages, I found there was a consistent aroma and

flavor profile unique to the vineyard. Clearly the early vintages possess the same underlying character as the current releases yet have

shown to age remarkably well. Originally planted to the five bordelaise, Malbec [1998], and Merlot [2003] were budded over to Cabernet

shows brilliant ruby color to the rim with no signs of age. It has a mature nose of cranberry, forest floor, camphor and brambly,

sticky blackberry followed by secondary aromas of savory olive tapenade with violet. The palate entry is beautifully elegant and

youthful, jammy character in the nose. The palate is dense and compact black fruit, with well-integrated acidity. No indication of

that the first wine was corked. The second bottle shows a beautiful nose of dark fruit, earth, spice, savory olive and mushroom.

A widely expressive palate entry with polished loam and mushroom lead to a mid-palate of violet and carbon. The overall

impression is elegant and understated. This is yet another indication that a vintage widely panned when released shows well

clove with secondary dusty essences. The palate is bright on entry yet flavors get a bit narrow in an otherwise solid structure

youthful with plump, sun-ripened boysenberry, dark cherry and mint. The palate is supple yet structured finishing with lighter

carbon, blackberry, violet and savory mushroom. The palate is bright with an overall youthful structure offering depth to the

licorice, currant and mocha. The mouth is richly forward and seems like a much younger wine showing vitality to the savory

herb and olive punctuated by bright acidity. Drink 2014 – 2022. 2003 CABERNET SAUVIGNON offers up a pretty nose of

2013 – 2019. 2005 CABERNET SAUVIGNON offers deep berry and currant aromas with some plum and spice. The palate

shows ripe polished fruit yet has a firm spine of acidity. Secondary flavors of licorice and tar add a lot of interest. Drink 2013 –

2018. 2006 CABERNET SAUVIGNON delivers aromas of briary blackberry and cassis. The palate entry is delicate and

2007 CABERNET SAUVIGNON shows a bit of earth and savory dark berries. The palate seems way out of character from

the previous wines in its dense and undifferentiated dark fruits with grippy, youthful acidity. Drink 2014 – 2019. 2008

and lavender. The palate is more reticent, with leaner, brighter definition however there is a well-saturated feel to the fruit.

profile. The palate is beautiful, vibrant black fruits and herb. Has the structure for aging. Drink 2015 – 2030. A limited number

of library wines are available from Dyer. Also if you like your Cabernet Franc as a single, unblended varietal, I tasted from a

2012 barrel that the winery is considering as a separate bottling. Requests may be made through the website at 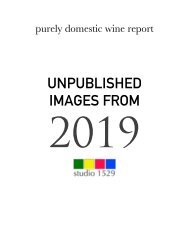 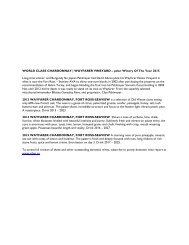 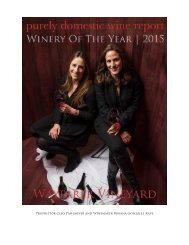 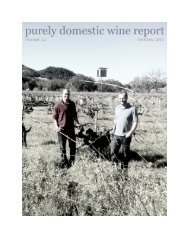