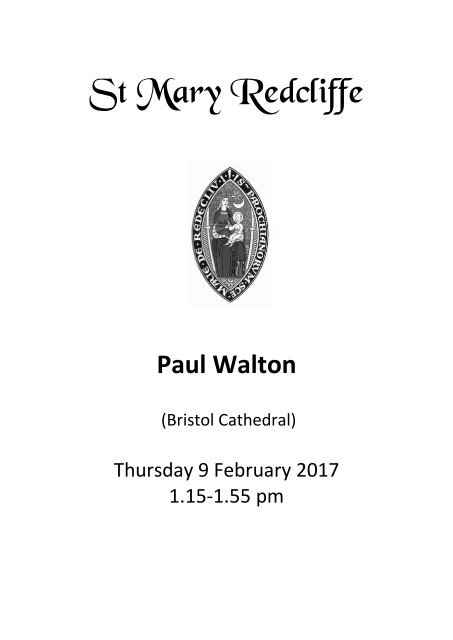 (Shakespeare’s church), and studied at the Royal Northern College of Music,

with Margaret Philips, Matthew Owens and Kevin Bowyer. During this time, he was

at Manchester Cathedral, where his numerous recitals included seven all-Bach

Diploma (the highest award for performance offered by the College), and the Master’s

degree, with distinction in performance.

Since September 2001, Paul has been Assistant Organist of Bristol Cathedral. As well as

accompanying and assisting in the training of the Cathedral Choir, he directs the

Cathedral Consort. He gives one recital per term at Bristol Cathedral, and has also given

recitals at several other venues throughout Bristol such as St. Mary Redcliffe and Christ

He has been accompanist for Bristol Cathedral Choir’s tours to France, Germany, Italy,

Poland and the USA. In Autumn 2012, Paul was appointed the Musical Director of Bristol

Phoenix Choir, and also recorded his first commercial CD, Rejoice and be merry!, a disc of

Christmas organ music on Regent Records. This was released in 2013 to wide acclaim,

including a 4-star rating in BBC Music Magazine, who said ‘Try his barnstorming assault

on David Briggs’s jubilant Sortie on ‘In dulci jubilo’ for size – epic!’ Paul’s performance of

was Editor’s Choice in the December 2014 Organists’ Review. His third CD, For the Iron

Paul is also known as an arranger. He has penned an extensive collection of over 300

Dialogué and the accompaniments to Parry’s Blest Pair of Sirens and I was glad. These

have become widely used, especially the latter, and have been performed in Australia,

Canada and throughout the USA. Paul’s occasional forays into actual composition have

More information on Paul can be found at www.paul-walton.com

without the permission of the performers.

The Arc Café in the Undercroft

Serving home made refreshments all day