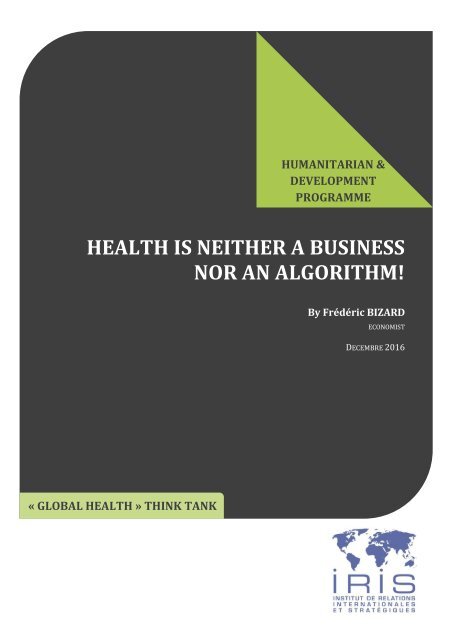 HEALTH IS NEITHER A BUSINESS NOR AN ALGORITHM!

HEALTH IS NEITHER A BUSINESS

19) could not be clearer. Wherever from - health care professional, industrialist,

multiple diversions, of which sanitary crises are only the tips of the iceberg. While health

policy has tended towards commercialisation in recent years, it has neglected

Santé Publique) was established which earned general practitioners an average of €

6700 in premiums in 2015. If this system seems appealing, it is simply remuneration for

a doctor to do his or her basic job. For example, performance indicators include taking

blood pressure from hypertensive patients, measuring the glycated hemoglobin of

diabetic patients, and displaying opening hours. We are seeing a move away from ethical

provoking an improvement in practice.

hunters in ‘medical deserts’. For several years more than 6000 doctors have earned up

periphery – in areas deserted by other medical professionals. These doctors not only

impose their re-organisation of services, but also define the conditions of their

hospitals. In practice, they have little involvement in the medical process and in the

long-term monitoring of the patients, which results in a decrease in the quality and

safety of the care.

‘medical deserts’ at all costs” – a cost which has been designated at a flat rate of 50,000

euros. If these mercenary doctors fill vacancies in nearby hospitals, this premium

increases further. However, these funds must come from somewhere, and this messy

health policy has decreased the quality and value of consultations, which will only

increase ‘medical desertification’. As for the mutual healthcare networks defined in the

Le Roux law of 2013, these are based on the premise that health is a mass consumption

good and that by multiplying volume, the incomes of health workers is maintained,

while margins are decreased.

transforming all sectors, including health, and posing a major challenge to health

professionals. The state has also failed to harness the power of the digital revolution.

BRINGING THE DIGITAL REVOLUTION TO THE HEALTH SECTOR

From a digital point of view, the French health system is archaic to a point of

embarrassment. From computerized hospital services and personal medical records to

secure messaging and telemedicine, public authorities have succeeded in freezing

telemedicine is still not in common use. The legal acts lack financial backing and the

matters unnecessarily. The recent proposal from insurers to test telemedicine on less

than 10% of the national territory, highlights the lack of understanding and urgency in

the digitalization of health. What convincing do governments need in order to push the

development of these technologies? It is not a lack of resources, but political leadership

and decision making that is missing in this regard.

reactively, in response to specific events, rather than in an attempt to adapt our health

system to respond to a wider, changing environment. This strategic immobilisation has

put traditional health actors at risk of being affected by new actors, especially those

coming from the digital sector. Those most at risk will in reality be those whose

activities are not focussed on their real added value. For example, the pharmacists

of logistics, which is often far removed from scientific expertise. A logistics specialist like

of medicines in the best conditions of security and reactivity. The pharmacist would only

have to work on retaining customers and promoting his or her business.

Despite this real risk, the ‘uberization’ of health reveals certain fantasies of technobeats

THE MIRAGES OF ALGORITHMIC AND ‘UBERIZED’ MEDICINE

that will shape medicine in years to come. At best, doctors will serve as useful medical

engineers, and at worst as social workers with a useless degree. Indeed according to

American futurologists and giants of High Tech, we are entering an era of

"Genetics are not providence ... gene therapy is a very elegant therapy but is limited

number of diseases ... less than a hundred children globally have treated by gene therapy

to date... everyone carries 50 to 100 genes associated with genetic diseases without

being ill ... aging cells are unable to rejuvenate. Medicine will never defeat death. " These

from medical standpoint, the limits of the risks associated with medical uberization risk.

These limits are also to be found with looking at the issue from an economic standpoint.

In recent years, the United States has seen the growth of demand-driven healthcare

digital platforms 2 . The economic model for on-demand health care is much more

complex than on-demand services in other sectors. For example, the number of

compared to 25 USD) does not compensate for the lower volume of service use. In terms

of human resources, qualifications are higher and therefore qualified staff is harder to

find. As for marketing, the potential for this kind of service to go ‘viral’ is low de to the

the cost of acquiring clients. Another challenge is that citizens rarely pay for their health

costs immediately (rather paying later through insurance mechanisms) – though this

would be the best way for on-demand services to be paid for. The adoption of an ondemand

health service will be determined by the reliability of the service and its cost, as

opposed to in other sectors, where novelty and practicality are key determinants. Home

in the USA) and qualitatively (minor interventions only). Home physician services have

existed in France for a long time alongside SOS medical services, without threatening the

existence and use of office consultations.

consumer good like any other, at the risk of eliminating the notion of solidarity that sits

at the heart of the public health system. The missed digital revolution in the health care

the Imagine Institute for Research on Genetic Diseases. He is the author of « Programmé mais libre, les malentendus

per year since 2014. Examples of companies within this sector include: American well, Avizia, Carena, Chiron, Doctor

life, allows one to better understand the identity crisis which healthcare professionals

Fear is always a bad advisor. It will be up to health professionals to reaffirm their strong

ethical principles and bring about a cultural revolution, which makes medicine even

more effective and valued in the future, for both the users and the wider community! •

HEALTH IS NEITHER A BUSINESS NOR AN ALGORITHM!

A Think Tank under the

Magazine: HEALTH IS NEITHER A BUSINESS NOR AN ALGORITHM!