PLUS: HOW TO STAY

YOUR FREE COPY-TAKE ME WITH YOU

The promised lands of golfers

Simply put, Scotland and Ireland are the two ultimate golf destinations in the world. No other locales exemplify the true

tradition of the ancient game invented by Scottish shepherds over 500 years ago in the Kingdom of Fife. Today, both

the first golfer in recorded history, Mary Queen of Scots, played on in the 1500s.

and led by executive chairman and golf

reputation on creating the ultimate golf

escapes to Ireland and Scotland. We

recently interviewed him for tips and

getaways with golf clubs in tow.

trip for our clients.

We deliver a unique

Carr, the youngest of six siblings,

com es from one of the most famous

golfing families in Ireland as his father

J.B. Carr was a heralded player. When

asked about his early golf life he says,

“When I was growing up, my father

was in the twilight of his career. He

were considered ‘majors’ in those days.”

However, Carr learned his talents in

low scores. “I am an average golfer

compared to some of my family mem -

bers and always say ‘I have the name

but not the game.’ I made my way into

the golf industry in my late 20’s. I was

working in the U.S. in finance and I was

bored and ready for a change. My family Waterville.

was, and continues to be, steeped in

golf and it was something we were

deeply passionate about. I felt there

was an opportunity, so with my brother

said if you find a job you love, you’ll nev -

er work a day in your life.”

When asked what sets Carr Golf

apart from other golf tour companies

he says, “We’re all about providing an

exceptional trip for our clients. We

deliver a unique VIP experience for

in the world. We pride ourselves on

our attention to detail and having a ‘no

service. No request is too difficult.

You name it; we do it. Most importantly,

golf is in our DNA and it’s like we’re

going on the trip with you.”

According to Carr, it’s all about the right con -

nec ti ons in the golf tour industry. “Thanks to our

father, our family has a long legacy with some of

and Waterville as well as The Old Course at St.

Andrews and Turnberry in Scotland, to name a

few. Probably what sets us most apart from other

tour operators is that we won’t provide a quote

or transact with a client unless we have specific

guaranteed tee-times and confirmations for

He stresses that when considering which golf

tour company to work with, you need to ask the

right questions. “First, you need to have a budget

because that really dictates what tour company

you should be talking to. It’s important to know or

seek advice on what courses you want to play, the

number of rounds, the number of days, whether

you want to self-drive or have a coach, the type of

accommodations you prefer, really all the nuts and

bolts of the daily itinerary. You can do it yourself

or bring in someone like Carr Golf to make it

hassle-free. We work with all sizes of groups from

large to small and provide them with exactly the

KNOW WHAT YOU WANT

Carr offers advice for someone taking a golf tour

in Ireland for the first time: “It all depends on

how long you’d like to travel. But assuming you’re

coming from North America, for vacations of a

week or so duration, consider either a trip to the

south west of Ireland, the north/northwest or in

and around the Dublin area. These are all fun

destinations by themselves with clusters of some

of the greatest golf courses in the world. For longer

Carr continues, “One of the biggest factors we

often find for how much ground a client wants to

cover is whether they want to drive themselves

or have a tour guide who chauffeurs them around

the country. Many folks from North America feel

uncomfortable driving on the other side and the

roads can be a bit narrower than they’re used to.

Our guides are top-notch and can certainly make

a golf vacation even more enjoyable. They know

the lay of the land for any additional requests for

sightseeing or local restaurants. They handle all

the little things like getting the luggage to your

room and golf clubs to the courses. It’s money well

84 WOW Power to the people

For first-time visits to the birthplace

to know the lay of the land. “Scotland

Troon and Prestwick; the east coast

highlighted by St. Andrews, the birth -

place of the game with its iconic Old

Course; and the Scottish Highlands

Brora and Royal Dornoch where we’re

these areas all have clusters of great

“When I was growing up, my

father was in the twilight of

his career. He was probably

were considered ‘majors’ in

IT’S ALL IN THE LINKS

But wat makes golf in Scotland and

Ireland so intriguing and special? “I

think it’s the fact that we have ‘linksstyle’

golf courses. The definition of

‘hlinc’ which describes the arable strip

of land adjacent to the sea. These

are as are fairly unique to the U.K. and

Ireland and ideal for incredible courses.

On top of this, you have very friendly

environments, and, most importantly,

Carr also speaks of the many sights

and activities for those who don’t play

the game but travel with those who

do. “There are loads of activities for

are spectacular whether it’s the Cliff

of Moher or the Giants Causeway. The

vill ages throughout the country have

real character: There are world-class

shopping and spas, distillery tours at

Bushmills in Northern Ireland and the

Guinness Storehouse in Dublin, and,

of course, hundreds and hundreds of

Two of the most successful “special”

we started a father and son event in

Links in County Kerry. It’s grown to be

one of the best tournaments in golf.”

Carr continues, “As I have two daughters

and one of my best pals has three,

he persuaded me to start the father

back. Next year, we will have 40 teams

and it’s equally fun. What can be better

than heading off to a cool event with

your son, daughter or dad? There is

humorous or unusual requests from

clients over the years, Carr laughs and says, “I can’t mention

most of them! The best one I can talk about was in the height of

the financial boom; a guy sent a helicopter just to get some long

tees delivered. Hey, we do whatever the client wants!”

Carr sums up the lively interview by saying his favorite golf

experience was: “Playing golf with Arnold Palmer and my

brother Roddy on Old Head of Kinsale. That was special—also

playing in the AT&T Pro-Am at Pebble Beach.” He concludes

with his dream foursome: “My dad, my brother Gerry, and the

rest of my family could draw straws for the fourth slot.” v

WOW air offers cheap flights to Ireland and Scotland from USA and Canada several times a week, all year

round. Go to wowair.com for more information and booking.

Ireland and Scotland are the best golf destinations in the

world. Let Marty Carr and his staff take care of everything.

Ireland and Scotland have golfing down to a tee. Get into the swing of things and take a WOW flight to Dublin,

Cork or Edinburgh from USA or Canada.

86 WOW Power to the people

WOW MAGAZINE – THE ICELAND‘S FOOD ISSUE PRECIOUS NATURE ICELAND‘S PRECIOUS NATURE <strong>magazine</strong> ISSUE ONE 2017 POWER TO THE PEOPLE Issue three one 2017 2015 PLUS: HOW TO STAY VEGAN/VEGETARIAN IN ICELAND YOUR FREE COPY-TAKE ME WITH YOU 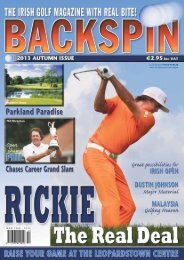 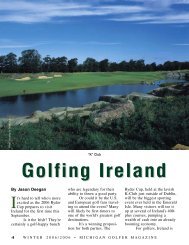