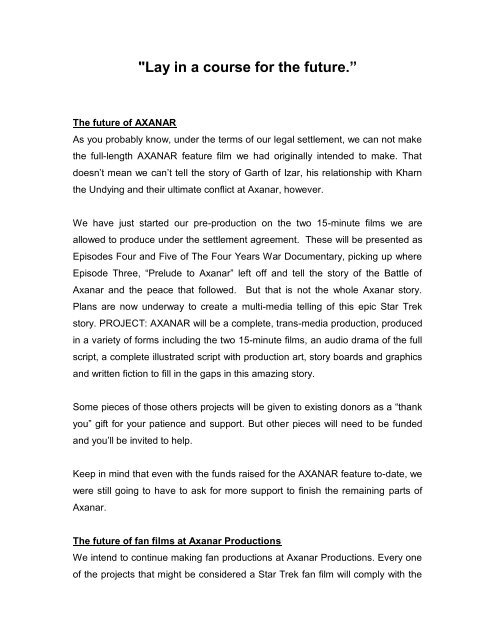 The future of AXANAR

As you probably know, under the terms of our legal settlement, we can not make

the full-length AXANAR feature film we had originally intended to make. That

doesn’t mean we can’t tell the story of Garth of Izar, his relationship with Kharn

the Undying and their ultimate conflict at Axanar, however.

allowed to produce under the settlement agreement. These will be presented as

Episodes Four and Five of The Four Years War Documentary, picking up where

Episode Three, “Prelude to Axanar” left off and tell the story of the Battle of

Axanar and the peace that followed. But that is not the whole Axanar story.

story. PROJECT: AXANAR will be a complete, trans-media production, produced

in a variety of forms including the two 15-minute films, an audio drama of the full

and written fiction to fill in the gaps in this amazing story.

you” gift for your patience and support. But other pieces will need to be funded

and you’ll be invited to help.

Keep in mind that even with the funds raised for the AXANAR feature to-date, we

The future of fan films at Axanar Productions

We intend to continue making fan productions at Axanar Productions. Every one

guidelines set forth by CBS.

But we’ve set our sights even higher than that.

The Federation Historical Society and will be an entirely volunteer effort. We also

franchises down the road.

Building on our experiences to-date, advice from our friends in the industry and

encouragement of fans and backers, Axanar Productions will be expanding its

production studio - making our own projects and assisting other independent, fan

and student film makers in bringing their projects to the screen.

It is our desire to provide low-cost production services to other filmmakers like us;

looking for fresh, high-quality entertainment in the sci-fi, horror and fantasy

501(c)(3) paperwork so we’ll be a tax-exempt, charitable organization as well.

We feel our focus on providing low-cost services to a broad, artistic community

is a noble and worthy cause.

partnerships to support that mission. I think you’ll be impressed.

The future of Industry Studios

Thanks to these support of our donors, we now have an awesome soundstage

facility called Industry Studios. Originally planned to be used for the production of

the AXANAR feature film, Industry Studios is now attracting the interest of

commercial and independent filmmakers. Our plan is to use the revenue

To help further that mission, we’ll be launching a crowdfunding campaign on

Wednesday, March 8th to raise funds to cover the hard costs of the soundstage:

rent, insurance, utilities and storage (about $15-18k/month). The more we raise,

the less we’ll have to rely on commercial rents to help us advance our mission.

Productions truly realize its vision of the future.

mission for Axanar Productions, it’s important we take a moment to thank you for

do with your trust and your donations.

were spent to get us this far. Donor funds provided nearly 85% of the money we

needed to deliver PRELUDE TO AXANAR, build out the Industry Studios

AXANAR feature film. The lawsuit with CBS and Paramount set us back by

nearly a year and cost us dearly in both cash and opportunity, but thanks to your

support and encouragement, we’ve persevered and are now proceeding with

AXANAR as a trans-media project that will include two, fifteen-minute fan films as

well as other productions that will help us tell the entire story of Garth, Kharn and

the Battle of Axanar in a new and exciting way.

production and entertainment business - who were tasked with the responsibility

appropriate business expenses. Their evaluation, as detailed in the letter, is that

our finances for retrofitting the Industry Studios space, shooting PRELUDE and

the Vulcan scene, pre-producing AXANAR, fulfilling our donor obligations and

promoting our productions were all within acceptable margins for the industry

Please note that while the total expenses for the past 3 years totaled nearly $1.7

requested (and in one case required) anonymity as a condition of that support.

travel, auto reimbursement and salary, were all paid for by myself and the others

who donated their support and made up the almost $ 300,000 in additional

expenses covered beyond what donors paid for.

that it’s time to focus on the future and move on.

Thanks again for your continued support and encouragement,

To Whom it May Concern

(Kevin Rubio) was asked, and did accept, to serve as part of a three-person independent financial review

board, consisting of myself, Cedric Yau and David Bailey, for the purpose of reviewing the financial

statements of Axanar Productions ( a donor-funded independent film project) for the calendar years:

In the interest of full disclosure, while I have no direct involvement in the production, I am a close

personal friend of the film’s attached director (Robert Meyer Burnett), and I have donated a sum total of $

25.00 (twenty five dollars and zero cents) to the proposed but as yet uncompleted Axanar film project. I

Scene”. In addition, it should be noted that the committee member Cedric Yau is a major financial backer

of the Axanar independent film project, and that David Bing Bailey has worked as Axanar’s Digital Ingest

Technician and colorist on both “Prelude to Axanar” and “the Vulcan Scene”, besides being a director and

editor in his own right, having produced two feature films.

agreement) which I signed.

After independent and committee review, we the undersigned, given our professional combined

experience of over forty years in the fields of finance, producing media across multiple platforms, and

physical production, can and do attest that the numbers presented to us by Axanar Productions,

accurately reflect, within an acceptable margin, the cost of what it would take to: 1) Lease and retrofit a

building to make a viable sound stage, 2) Mount a production (pre-prod and one day of shooting) up to

the point at which the production of the Axanar production was halted, 3) Donor fulfillment cost as of 2016

including items and postage, 4) Promotions.

Use of Donor Funds for PRELUDE TO AXANAR and AXANAR

Note: Costs include the build-up and rental of the Industry Studios soundstage

Use of Donor-raised Funds (Expenses):

Magazine: "Lay in a course for the future.”