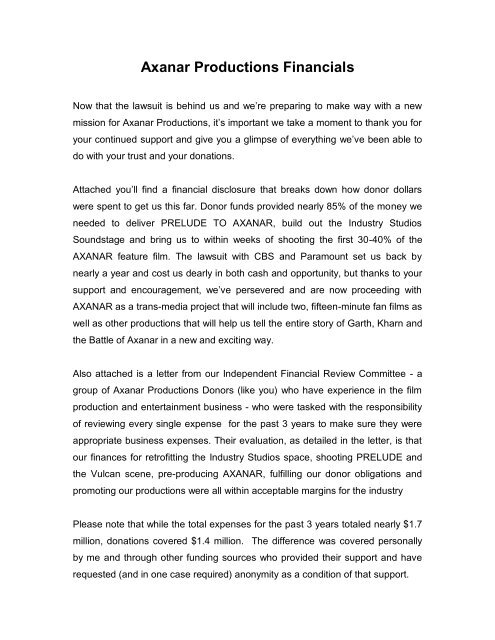 mission for Axanar Productions, it’s important we take a moment to thank you for

do with your trust and your donations.

were spent to get us this far. Donor funds provided nearly 85% of the money we

needed to deliver PRELUDE TO AXANAR, build out the Industry Studios

AXANAR feature film. The lawsuit with CBS and Paramount set us back by

nearly a year and cost us dearly in both cash and opportunity, but thanks to your

support and encouragement, we’ve persevered and are now proceeding with

AXANAR as a trans-media project that will include two, fifteen-minute fan films as

well as other productions that will help us tell the entire story of Garth, Kharn and

the Battle of Axanar in a new and exciting way.

production and entertainment business - who were tasked with the responsibility

appropriate business expenses. Their evaluation, as detailed in the letter, is that

our finances for retrofitting the Industry Studios space, shooting PRELUDE and

the Vulcan scene, pre-producing AXANAR, fulfilling our donor obligations and

promoting our productions were all within acceptable margins for the industry

Please note that while the total expenses for the past 3 years totaled nearly $1.7

requested (and in one case required) anonymity as a condition of that support.

Magazine: "Lay in a course for the future.”