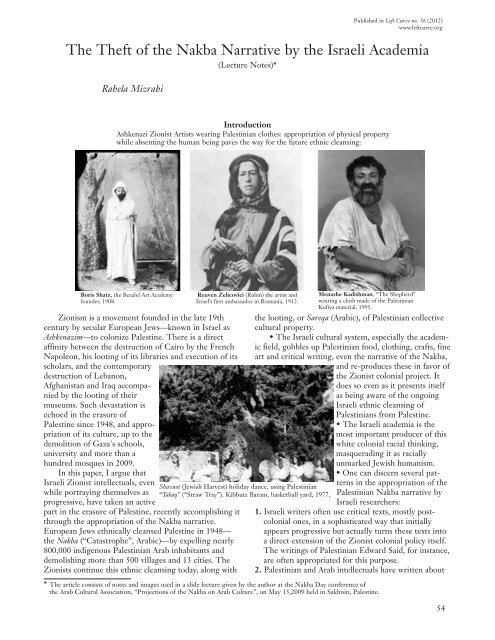 Zionism is a movement founded in the late 19th

century by secular European Jews—known in Israel as

Ashkenazim—to colonize Palestine. There is a direct

affinity between the destruction of Cairo by the French

Napoleon, his looting of its libraries and execution of its

scholars, and the contemporary

by the looting of their

museums. Such devastation is

echoed in the erasure of

Palestine since 1948, and appropriation

of its culture, up to the

university and more than a

In this paper, I argue that

while portraying themselves as

progressive, have taken an active

part in the erasure of Palestine, recently accomplishing it

through the appropriation of the Nakba narrative.

demolishing more than 500 villages and 13 cities. The

Zionists continue this ethnic cleansing today, along with

The Theft of the Nakba Narrative by the Israeli Academia

while absenting the human being paves the way for the future ethnic cleansing:

Reuven Zelicovici (Rubin) the artist and

wearing a cloth made of the Palestinian

the looting, or Sareqa (Arabic), of Palestinian collective

art and critical writing, even the narrative of the Nakba,

and re-produces these in favor of

the Zionist colonial project. It

does so even as it presents itself

as being aware of the ongoing

• The Israeli academia is the

most important producer of this

masquerading it as racially

• One can discern several pat-

terns in the appropriation of the

ones, in a sophisticated way that initially

appears progressive but actually turns these texts into

a direct extension of the Zionist colonial policy itself.

The writings of Palestinian Edward Said, for instance,

are often appropriated for this purpose.

2. Palestinian and Arab intellectuals have written about

the Arab Cultural Association, “Projections of the Nakba on Arab Culture”, on May 13,2009 held in Sakhnin, Palestine.

cultural appropriation since the 1930s. Discussions of

cultural appropriation, however, appeared in North

American and Western European academia only in

the late 1980s, and traveled to Israeli academia at the

end of the 1990s. Paradoxically, it is the Israeli academics

who are recognized as pioneers in the discussion

of the cultural confiscation of Palestine. The

Palestinians’ own research and writing about the

takeover has been completely overlooked in the West.

3. Both Israeli academia and the Israeli fine art establish

into the Zionist narrative.

“I am from Safed” written by the Poles

Vilenski and Alterman, who are using

the Arab Jewish performer as a means

There are three distinguishable phases to the Israeli

In the first phase, the Zionist movement, and then

the State of Israel, made great efforts to indigenize the

with the local heritage, claiming, “the return of an

and define the culture of the Other without being

deeply familiar with it commit an act of cultural violence.

In most Israeli writings about Palestinian art,

5. The Israeli intellectuals’ fashionable confessions of

the cultural appropriation and ethnic cleansing of

Palestine create the illusion of self-criticism. The

recurring pattern is as follows: First, the Israeli inflictors

the violence. Later, when there is no danger, they

confess their violent deeds—an act that wins them

international forgiveness and legitimacy, along with

widespread acceptance of the facts they have produced.

indigenous people to its homeland after two thousand

years.” This phase primarily involved the theft of various

elements from Palestinian heritage that were then redistributed

all over the world as ancient Jewish heritage.

For example: The Palestinian Kufiya.

memory of the Israeli Defense Force (IDF) elite unit Egoz who died in combat in the Golan Heights in the 1973 war.

After the Nakba, the Israeli intellectuals dedicated

their work to supporting the seizure of Palestinian land

and physical property, and de-Arabizing all of the above.

The first project is an art exhibition entitled

“Kadima: The East in Israeli Art.” It was held at Israel’s

national museum in 1998, which openly examined the

about using the writings of Edward Said and the term

establishment has started to admit to the role of art in

adviser and main catalog’s author, wrote: “The Arab is a

means of returning to the ‘Jewish past,’ because he was

considered to be the one who preserved some of the

Hebraic costumes in his heritage.”

In the second phase, after the 1967 war Israeli intellectuals

devoted themselves to representing the conflict

between Israel and the people of Palestine as a symmetric

struggle between two indigenous people. Such a representation

supported the official discourse adopted by

Israel’s Ashkenazi Left, who called for “two states for

two peoples”. At this phase the Israeli intellectuals repre-

In the third phase, since the end of the 1990s, Israeli

intellectuals have fully admitted to the Nakba, and have

even produced research on it—rewriting history as a

sented themselves to world intellectuals as progressive

of Palestinian land. The intellectuals also declared the

Israeli soldier to be a victim of this occupation (see

art and art criticism from this phase, but due to space

limitations I will discuss only two:

To the East (Kadima):

Orientalism in the Arts in Israel.

Catalog of the exhibition in

Arabs, and the Bedouin in particular, a descendant of the

ancient Jews, as well as the Yemeni and the Sephardic

Jews, [...] as if they maintained a Torah-era lifestyle.

They have all become empty and transparent signifiers,

stuffed with Zionist contents and turned into biblical

figures. In the Zionists’ view, the land was given to the

Jewish colonizers in advance. By this logic they can

of ‘Betzalel’ was an integral part of the Zionism propaganda

Is this a direct admission of Israel’s colonization of

Palestine? Probably only as a civilized veneer. The late

researcher Sara Hinski claims that the Kadima text is not

a critical text, as it may seem above, but a direct extension

“The use of the term ‘Orientalism’ as was coined by

Edward Said, and as adopted by Tzalmona, in the context

The second project is

Palestinian Art, the book of

three chapters of her book

from his writings. Ankori v.

plagiarism, but it is first

and foremost a case of the

Palestinian voice, mainly the Nakba narrative, told to the

world from a Zionist Orientalist perspective. In this way,

that the Israeli cultural-political space forms a culturalcolonial

web of links [...] Although Kadima flaunts its

Orientalism, the exhibition itself operates as a typical

and cunningly deploys the idea of colonialism: it reasserts

the Western-ness of the spectator, without hurting

Ankori and scholars like her in Israeli academia portray

themselves as the courageous few Don Quixotes, fighting

the windmills of Zionism. Ankori masquerades the

book as a pro-Palestinian radical text. In the wake of this

case, the Association of Fine Artists of Palestine issued a

statement entitled: “They Do Not Only Steal Our Land,

But Also Our Blood, Sweat and Tears.” They affirmed

that the first three chapters of Ankori book are plagiarized,

continue: “We must realize that such insidious practices

are perpetuated by some Israeli researchers, who appoint

themselves to speak for Palestinians, claiming they can

only be understood in the context of colonialist framework.

At the same time, Israeli authorities are continuing

to seize the remaining lands in our country, and burying

its actual history in the process.” In 2007 Ankori

received the Polonski Award for creativity and innovation

in the field of humanities for this book.

While conducting my research I have encountered a

flood of Israeli academic publications that tell the Nakba

story, directly or indirectly. Many of them are Ph.D. or

tion of the subject precludes Palestinian researchers from

writing their own dissertations on the Nakba.

I will discuss three books that have recently been

issued by the Israeli academic presses:

and English. This book tells the history of Maskit.

Maskit was a textile company founded by Ruth

during the 1967 ethnic cleansing of Palestine and an

from Arab and Muslim countries, as well as indigenous

Palestinians skilled in producing crafts from their own

and Kufiya dresses all over the world, marketing

them as works of ancient Jewish heritage. It flourished

when the Zionists completed the 1967 occupation of all

occupation as a gold mine.

Doner is keen to add Sara Hinski’s writings to her

bibliography, usurping their contents in the process.

Jewish Holy Sites in the

State of Israel by Doron

Gurion Institutes for the

Research of Israel and

University of the Negev.

Ben-Zvi, an academic expert on Jewish diasporas in

the Muslim World, was the second president of Israel,

and Ben Gurion was the first prime minister. The Nakba

The book discusses the mechanism of the Ministry

of Religions, established by Ben-Gurion. The Ministry

of Mizrahi (“Oriental”[Hebrew], from Arab and

In exposing this, Bar is ostensibly progressive in

exposing the appropriation mechanism, but it is a veneer.

He seems quite supportive and even proud of this

(When and How was the

Published in English as:

The Invention of the Jewish

asserts that the Jews were not one people, but communities

belonging to different peoples. They adopted the

The fly in the ointment here is that, firstly, Sand

also claims that the Palestinians are not a people.

and the beginning of the twentieth century, but Western

academia has considered their research non-scientific

and thus ignored or marginalized them. Although

Western academia is aware of these claims, Sand does

not explicitly mention any of them—nor does he quote

or engage with Palestinian scholarship. He represents

himself as a pioneer discoverer, and is accepted as such.

Sand won the French Journalists’ Award in 2009 as a

result of his book.

with Nakba narratives. Nevertheless, these narratives

are still an integral part of the Zionist project to

erase the Palestinian civilization, so that it can be produced

as Israeli academic texts. I am an Arab-Jew. I have

witnessed the parallel complete erasure of the Arab-

Jewish civilizations by Ashkenazi Zionists. The extent of

the academic cultural appropriation that our communities

have lived through is discussed by other members of

this panel. I therefore echo and support the Palestinian

call for the academic and cultural boycott of Israel.

End Note by the author: Rahela Mizrahi signed the

Palestinian call for the cultural boycott of Israel in 2006.

Jerusalem and a Master’s Degree in Arabic Language and

Literature. She has completed her Masters Degree without

part which discusses the Israeli academia in her Master’s dissertation

about the “Patterns of Expropriation, Conversion,

and Appropriation of Palestinian Heritage through Israeli