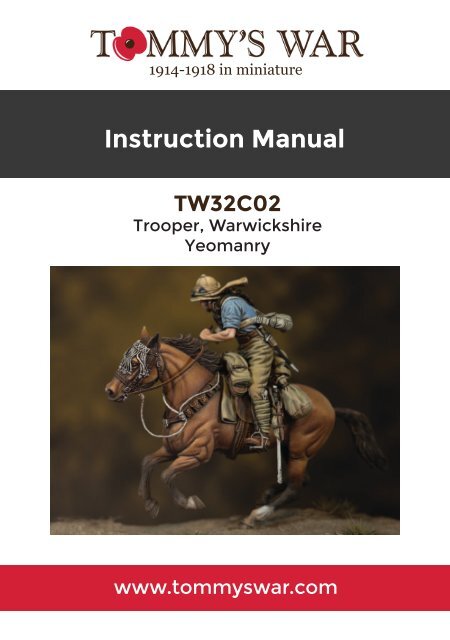 Instruction manual from the Tommy's War cavalry range demonstrating how to build this 1/32 resin model kit into a reproduction of a Yeomanry Trooper charging at the Charge at Huj in the Middle Eastern theatre during World War One.

A brief introduction to the

During the 3rd battle of Gaza, the British army had advanced on the

Palestinian Arab village of Huj where the Ottoman army (consisting of

On the 8th November 1917 the offensive against the Ottomans had

stalled due to artillery fire from a ridge of high ground to the south.

The position was heavily defended with artillery, 300 infantry and

6 machine guns. Unable to take the ground with infantry, the cavalry

units available were called for.

formed-up and advanced toward the enemy, charging from 300 yards

in to a storm of artillery and machine gun fire.

There were three separate charges that day, resulting in the capture of

loss of twenty six men and three officers. One hundred horses were

The charge allowed the British to press home their main attack

Major Oscar Teichman, the Medical Officer for the Worcestershire

down in history like the Charge of the Light Brigade at Balaclave.

almost daily it was merely an episode, but as the Official Historian

protruding from the hoof (1), it is important to cut around that

to provide stability when based.

I have now cut away

resin to leave the rod inserted in to the horse intact. This can

be trimmed later when you base the horse, but leave enough

that it can be inserted in to your groundwork. Only his leg of

the horse is planted, so this needs to support horse and rider.

(B) I now prepare the two halves of the horse to be glued, here

I’m using Roket glue by Deluxe (other adhesives are available)

with an applicator. I find this helps accuracy when applying the

glue. The plastic dish here is the lid off a long discarded tube

of Pringles. This can be disposed of, I always keep pieces of

In 1914 the British army were using a mix of equipment. The

saddle was in the main the 1912 universal pattern saddle. The

bridle and bit were part of the 1902 pattern equipment.

This additional part is shown in the small photo-etch fret

provided with your kit.

I trimmed the two parts from the sprue with a scalpel

with a new blade.

The two parts were cleaned-up and placed ready.

I did trim the part to allow a better fit, see the images of

the actual horse , you can see how the individual parts fit

There are several ways to make the reins, you can use paper

cut to size. I prefer to use Tamiya tape as it forms in to shape

quite easily. Cut on a glass chopping board with a sharp knife

and place in to shape. The string (included in this kit) creates

first but all the time testing the position of the rider. It is

important that the rider is shown standing in his stirrups, he

Here you can see the satchel has been applied, this is

designed to look as if it is moving with the horse, so the

pack itself is not clued to the body. This gives the figure a

Note, I have not at this point fixed the water bottle (with

strap formed from Tamiya tape) or the neck protector to 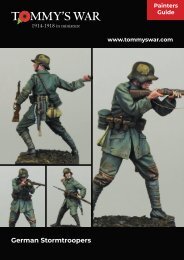 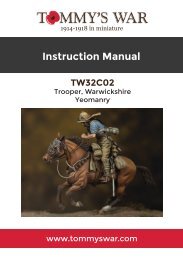 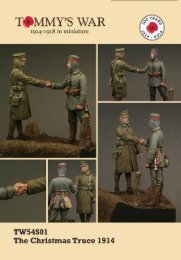 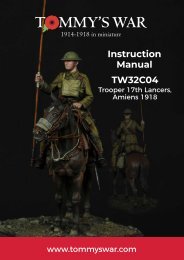 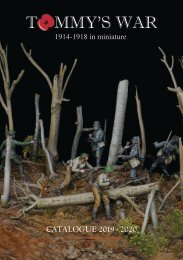 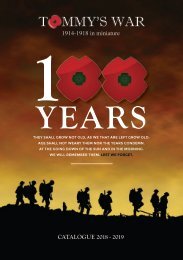 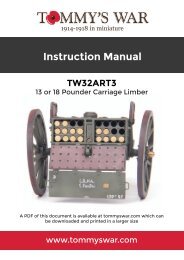 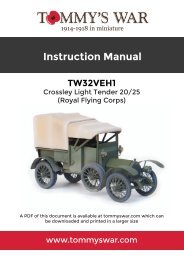 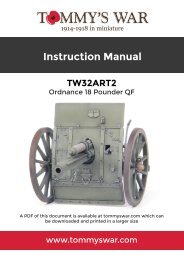 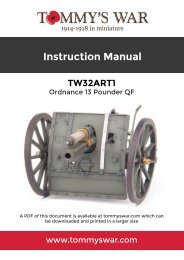