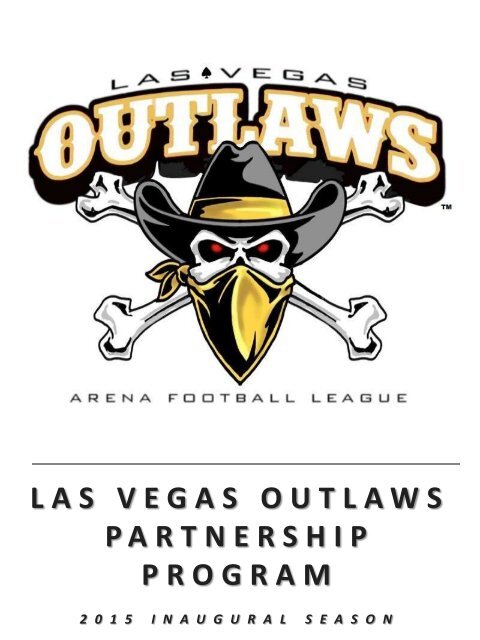 Arena Football is one of the fastest growing sports in the world.

Football. Fans at every arena across the country have nothing but a wall

separating them from the game. Players routinely make diving catches over

the walls and into the laps of fans, creating a fan experience unlike any

other in professional sports. And the fast paced, non-stop action makes for a

ABOUT THE LAS VEGAS OUTLAWS:

franchise team based in Las Vegas, Nevada. They will begin play in the

is owned by Vince Neil, lead singer of Mötley Crüe.

Head Coach Aaron Garcia is an AFL legend. He holds the record for career

LAS VEGAS OUTLAWS HOME GAMES WILL BE PLAYED AT

Thomas and Mack Center is an entertainment tradition in Las Vegas.

events for both men and women, Professional Bull Riders, National

festivals as well as conventions, private parties and now the

All home games will be broadcast on:

successful as possible. I don’t want

to be an absentee owner. I want to

say ‘Hi’ to the players. It’s good for

“This really will be ‘Girls, Girls,

Posse will look as if they have

stepped right out of the hottest

music video of all time…”

Over 2 Million Fans During 2014 Season

leader in the community.

that include but are not limited to the following:

Example - “That’s a Partner/Sponsor first down!!!”

Partner/Sponsor will receive one 30 second spot/ad

including any potential playoff games

on ESPN Radio for all home and away games

Partner/Sponsor will be granted a license to use the