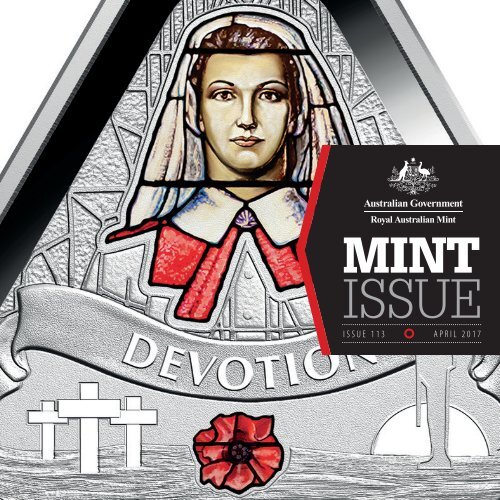 A MESSAGE FROM THE CEO

Ahead of International Nurses Day on Friday 12 May, now is the perfect time to

reflect on the incredible impact nurses have on the lives of many. Our cover image

1 The Royal Ladies collection on show as part of the Stuart Devlin – The Designer with the Midas Touch exhibition.

2 Luke Marshall after striking the first coin of 2017.

ten years ago. As we get ready for the XXI Commonwealth Games on the Gold Coast

and will be sure to get everybody into the sporting spirit.

finishing on April 30. His glittering career began as the designer of our nation's original

of our time. For those who have yet to visit this exhibition I recommend that you come

to the Mint and see some of the stunning work of Stuart Devlin AO up close.

products on page 8, Sir Jack Brabham coin on page 6 and even a colouring book for

Centenary of the Trans-Australian Railway 13

Answer the question below to go into the draw to

How did Stuart Devlin work out how to illustrate the animals on Australia's decimal coins?

Send your response to info@ramint.gov.au with the subject heading ‘Mint Issue 113 – Quiz’.

Want to be tested some more? Check out the ‘Quizling’ section on our website.

Nurses have played a critical role in Australian military history,

tending to the needs of sick and wounded soldiers as well

as civilians whose lives have been affected by war.

by Napier Waller at the Australian War Memorial, this unique

triangular coin is the second to feature a stained glass

window and reflects on the tireless devotion of service

nurses, a universally touching theme many will want

The story of three-time Formula One World Champion

Sir John ‘Jack’ Brabham AO OBE is one of the brightest

evolved from a well-developed mechanical aptitude to

driving when a friend convinced him to race one of the

vehicles they had created in 1948. Realising his skills in motor

racing extended to being behind the wheel, Brabham went

on to win the 1948 Australian Speedcar Championship.

Brabham also became the first and only racing car driver

to win a Formula One World Championship in a car of

This dynamic coloured coin is sure to appeal to those inspired

Occurring every four years since its inception in Hamilton,

Canada in 1930, the Commonwealth Games will return to

Australia in 2018 for an exciting fifth time. Held on Australia’s

attract more athletes than ever before. Travelling for 388 days,

the Queen’s Baton will move from Buckingham Palace and

across all Commonwealth nations and territories carrying a

*Stock available at time of printing.

With extremely limited mintages on both the gold and silver

coins, be sure to get your order in quickly as these won’t be

Across the globe, sporting greats are preparing their minds

and bodies for the XXI Commonwealth Games. Australia’s Gold

Coast is getting ready for a grand celebration of sport, unity,

Excited that this magnificent sporting event is being held in his

of the Gold Coast 2018 Commonwealth Games, has teamed

$1 coin. With a fun colour design and the first coin to be

released with a 2018 date to take you right up to the Games,

make sure you don’t let this unique coin pass you by.

Depicting some of Australia’s most beloved animals the

To coincide with this fun collection, the Animal Alphabet

26 alphabet themed pages to colour in and a design your

own coin feature, this colouring book lets you get creative

with your own design flair.

These coins pay tribute to the iconic journey between east

and west that was instrumental in connecting our nation

after federation. The four-coin uncirculated set includes a full

includes a ‘C’ for Canberra mintmark.

quickly, make sure to place your orders fast before the

75th anniversary of the

sinking of the SS Vyner Brooke

As seasons change and a joey grows, the cycle of nature

becomes intertwined with the lifecycle of a kangaroo. The

grey and drizzle of winter makes way for the colour and

growth of spring and the young eastern grey kangaroo

emerges from the warmth and security of its mother’s pouch.

Joining her to graze on nature’s offerings, the bond between

mother and joey is also in full bloom.

to illustrate the life of this iconic Australian animal.

This year we mark the 75th anniversary of the sinking of

the SS Vyner Brooke and remember the devastating effects

of the aftermath and the many inspiring struggles for survival

Depicting design elements from the SS Vyner Brooke and the

location of the attack, this 20c uncirculated coin will appeal to

those who seek military themes non-combatant in nature.

ADD THESE ITEMS TO YOUR COLLECTION

More than 50 years on since Stuart Devlin AO designed our

coin has been released in honour of his work.

While the frill-necked lizard design eventually won out

on the 2 cent coin, this alternative design featuring a

Kangaroo and Joey has stood the test of time since its

original creation in 1966, never before released on a coin.

A testament to the strength of great designs and a true

hallmark of Stuart Delvin’s enduring appeal, this coin is a fitting

acknowledgment to the work of Devlin and a perfect memento

to Stuart Devlin – The Designer with the Midas Touch exhibition.

Effigy of an Era

Effigy of an Era

The Voice of Cricket

12 months as a fitter and machinist. As part of this role Jamie

One of the most challenging aspects for Jamie when he started

the Mint’s advanced software to create tooling models. With

the software, Jamie is able to create models for tools ‘that the

machines can then turn into new parts’. The machines do this

by interpreting complex coding from the software Jamie has

used to create his models. The tolerances that the machine

levels of accuracy that is needed.

While Jamie isn’t a coin collector himself, since he gets to see

often hard to resist buying one of everything!

The XVII Commonwealth Games were held in Manchester,

featured a bevy of Australian competitors including runner

For these Games the Mint produced Australia’s first true

tri-metal proof coin which comprised of an inner core

made from gold, surrounded by a silver centre ring and

This stunning coin was designed by Wojciech Pietranik,

Check out the 2018 XXI Commonwealth Games

NEWS FROM ACROSS THE MINT

Stuart Devlin - The Designer with the Midas Touch

Have you visited the Stuart Devlin - The Designer with the Midas

this is a must see exhibition for anyone who appreciates fine art,

booth located at the Home, Garden and Lifestyle Hall, booth

counterstamp coin and commemorate 100 years of

team at the Heritage Pavilion where you can play our quiz

testing you on your historical coin knowledge. Pick up a

circulating coin folder while you there and start collecting!

Stay in the know

and news from around the Mint? Our electronic newsletter is

the best way of keeping abreast of information and product

releases as soon as they drop! Email salesinfo@ramint.gov.au

your way to having the latest Mint news delivered

straight to your fingertips.

The Mint’s Legends program is free to join, easy to use and

works by rewarding you for simply shopping with us. You'll

always be among the first to know about the latest news,

Claire can’t wait to welcome you to the program! To join,

we can update you as soon as products are released.

please visit our website. All products are subject to availability. All products will be available from Monday 3 April 2017 at the Coin Shop and eShop unless otherwise stated. All information is correct as of time of printing. 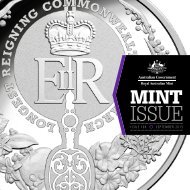 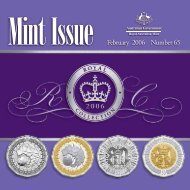 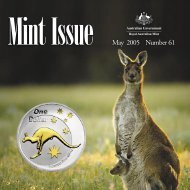 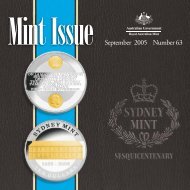 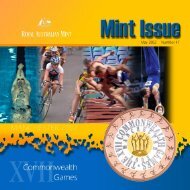 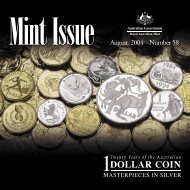 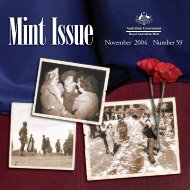 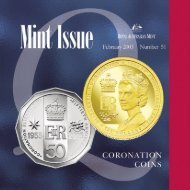 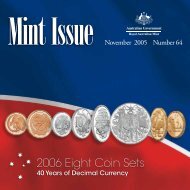 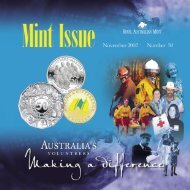 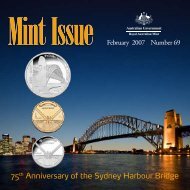 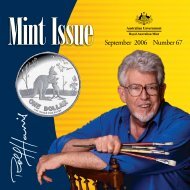 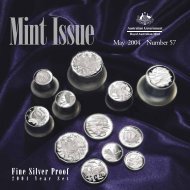 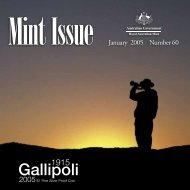 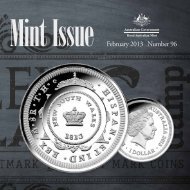 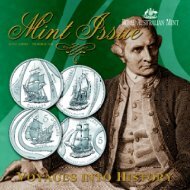 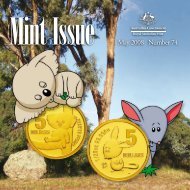 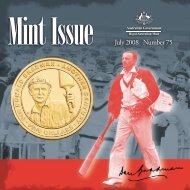 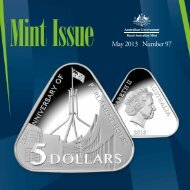 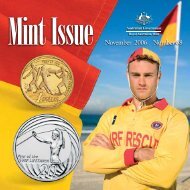 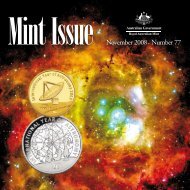 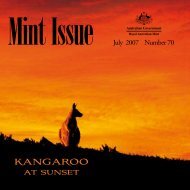 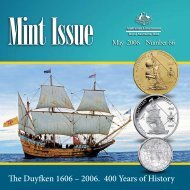 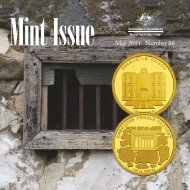 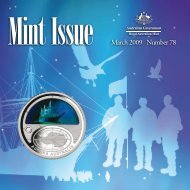 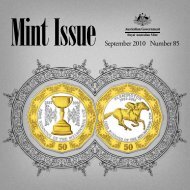