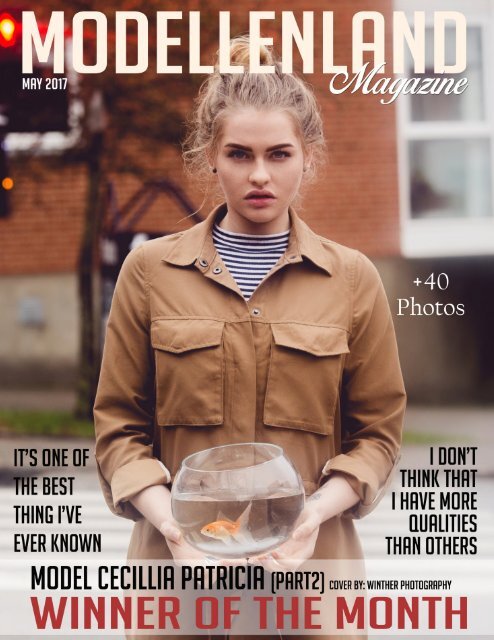 Winner of the month

Can you tell us a little about you?

My name is Cecillia Patricia Refsgaard, I was born in Denmark 18th January 1997.

I always liked to be different from all the other kids in primary school, which gave

me some tough years, but at the end of the day, my childhood has only made me

grow stronger and more experienced in life’s hardest sides, and now leads me to

If you could change anything about yourself, what would it be?

personality, but I believe there’s always something, maybe tiny things, you want

to change if you could. Take me for example, I have stretch marks and if I could I

would like to change that, but I have learned to live with it and I’m now very

comfortable with who I am and what I have.

How did you start modelling?

Since I was little, people asked me why I didn't start as a child- model, the answer

was, that I was insecure because of overweight. I was around 13-14 years old,

when I began to eat less unhealthy and started to working out. However, for me

modelling started when I went to Boarding school, where they had photographic

equipment, which we was allowed to use, so we went outside to take some

photos. Since then I've been in love with being in front of the camera, whether it

was a selfie or someone who photographed me. That took me to the next level.

In the beginning, my job was to find connections, also known as amateur

photographers, which was the easiest part in the whole process. The next was to

work hard enough to be seen on the social Medias, so photographers, which was

more professional, wanted you in front of their camera.

What do you think of the work as a model?

It’s one of the best thing I’ve ever known, being in front of the camera is like

being a character in a play or in a movie, you can be a completely different person

compered to who you normally are, but you can also use it to highlight your true

person, or your message to others.

What is your beauty regimen?

The way I stay beautiful and heathy are to do sports, get enough sleep and take care of my skin. I

Nevertheless, true beauty comes from the inside; it’s not what you eat or what to wear. I think

that true beauty comes when you know your true value and shows respect to others, exactly

because you are comfortable with whom you are, we are all special, every single one of us, and

we don’t have to look the same.

What are your personal qualities, which distinguish you from others?

I don’t think that I have more qualities than others, But I know that I have control of what I’m

capable of, I know how I look in different poses and face mimics, but I still have a lot to learn.

natural lips and the intense eye contact I have with the camera, makes it feels real for those who

look at the photo.

What are your plans for the future?

Sometimes you want to do something but ending up doing a completely different thing. Until now,

my plans for the future is to help other people with their health and to reach better physics. I also

want to continue modelling and maybe start coaching other models. I’ll take one day at the time,

I’m still young and don’t have to hurry.

What are some of your favorite experiences so far?

I don’t know, all my experiences from modelling are so amazing that I can’t choose. Everyone has

been so nice to work with, and the teams that I have worked with were all fantastic. If I had to

choose, I‘d maybe choose those experiences where my limits were exceeded as the greatest so

far, because they got me further and made me more experienced.

Do you have any advice for those who want to start modeling?

No other than, don’t do something you’ll regret later on, because when first it’s out there you

can’t take it back. And don’t do something you aren’t comfortable with, just because someone

says that you should. Be ready and prepared for everything, and don’t expect others to do

everything for you. Shortly said; Be yourself no matter what.

What do you think of the magazine?

It’s really a fantastic magazine, almost every person have access to the internet, so it’s both easy

and free to read. For me Modellenland Magazine is an inspiration. You can get so many ideas for

your shoots, Jack and Høier just by reading one magazine you’ll get to know so many new models and

photographers you haven’t seen before, which you maybe want to see more from.

Creative Director and Editor in Chief: