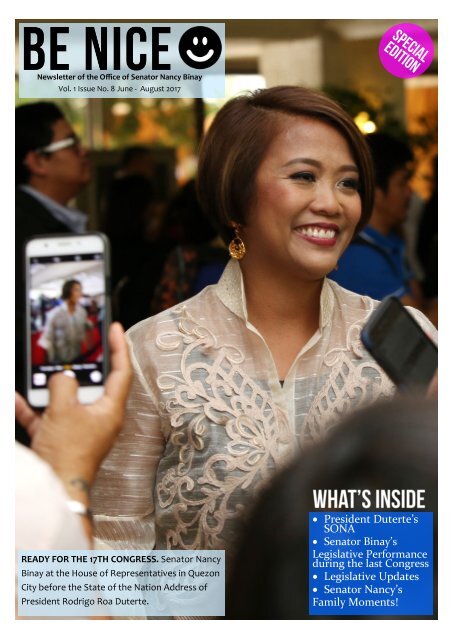 The Be Nice☻ Newsletter is the monthly publication of the Office of Senator Maria Lourdes Nancy Binay.

Newsletter of the Office of Senator Nancy Binay

Binay at the House of Representatives in Quezon

City before the State of the Nation Address of

during the last Congress

Legislative Performance of the

Senate for the 1st Regular Session

of the 17th Congress

Opening of the 2nd Regular

Session of the 17th Congress

Newsletter is a monthly publication

of the Office of Senator Maria

Lourdes Nancy Binay and is produced by

Together with other members of the Joint Congressional Oversight

Committee, legislators heard the implementation of the National

of PhilHealth in its implementation of the law. Senator Nancy

Binay and Senator Risa Hontiveros (inset) represented the Senate in the

and House Bill No. 5225, or the Internet Access in Public Places Act,

For comments and suggestions, please

send us an email at media.senatorbinay@gmail.com.

and black pants by

of the 2nd Regular

Session of the 17th

Below are the official social media accounts of Senator Nancy.

Follow us on these channels for the latest news and updates.

on culturally adaptive basic education and

during a project conference of the National

Under the program, basic education for our

The Senate bids its

last goodbyes to one

of the greatest Filipina

was an active leader

Number of Bills Acted Upon

BY THE NUMBERS: SENATOR BINAY’S PERFORMANCE

Being the “Nanay de Pamilya” in the Senate, Senator Nancy continues to advocate the interests of women,

the youth and the elderly. With her meaningful pro-women and pro-children legislative record, her total

that are true to her advocacies. These are some them.

(An act providing for the scaling up of nutrition for the first 1,000

days of life through a strengthened integrated strategy for

funds therefore and for other purposes.)

For Senator Nancy, SB 1537 is part of the bigger picture of

caring for our mothers and children. The bill also

she also co-sponsored, that provides 120 days of leave for

conception to his or her second

birthday, are considered to be a crucial

time if we want him or her to grow up

healthy and be successful in life.

(SB 1444 proposes the establishment of institutional

mechanisms that will ensure the proper mobilization of the

necessary scientific and technical resources to protect and

conserve the ecosystems and biodiversity contained in the

As chair of the Senate Committee on Tourism,

Senator Nancy firmly believes that it is important

that we set aside certain landscapes and seascapes

that harbor unique and distinct features for

protection and conservation. This is so that future

generations can also experience the beauty of our

country as part of their patrimony and heritage.

She recognizes that development entails the use of

our natural resources but there is also a need to

balance and sustainably use these finite resources.

maternity leave to female workers regardless

Two other measures that she championed

Notable bills that were passed into law

during the 16th Congress

1.) The law Repealing the Crime of

Premature Marriage under Article 251 of the

2.) The Act Expanding the Benefits and

Privileges of Persons with Disability

3.) The passage of the Centenarians Act of

Language of the Filipino Deaf and the Official Sign Language of

Government in all Transactions involving the Deaf, and Mandating

its Use in Schools, Broadcast Media, and Workplaces)

The state recognizes the rights, privileges, and freedoms of

persons with disabilities (PWDs) with the adoption of

policies and programs that would develop their selfreliance

and self-development, as well as promote their

rehabilitation. This is in consonance with the United

Nations Convention on the Rights of Persons with

Disabilities that promotes and protects the rights of PWDs

and their full enjoyment of it.

National and local state agencies shall uphold respect for

their inherent dignity, individual autonomy, and

independence by guaranteeing accessibility and eliminating

all forms of discrimination in all public interactions and

participation and inclusion in society.

Part of these policies is ensuring that our fellow Filipinos

right to expression and opinion without prejudice to their

condition. It is estimated that around 120,000 Filipinos are

deaf, according to the national census done in the year

Mr. President, and I fear that there are more and more

PWDs who do not enjoy their rights.

The Members of the Senate of the Philippines

2nd Regular Session of the

Ladies of the Senate

STATE OF THE NATION ADDRESS

high heels without breaks with much needed respite. A good example of these

workers are salesladies who brave several hours of service without sitting

breaks while teetering on several inches of heels,” she said.

In August, Labor Secretary Silvestre Bello III was quoted in news reports saying that he has ordered the

long hours without sitting, when these expose them to various safety and health hazards. Sadyang masakit sa

132(A) of the Labor Code by requiring owners and operators of malls, department stores and similar

Senator Binay pushes for a bill that provides

separated women with a choice

makes it easier for women to change back to their

maiden names after separating from their spouses.

Women to Revert back to their Maiden

women to file a verified petition for reversion

through the local registry office of the city or

municipality where her marital record is

This makes it easier for separated women as

they no longer need to go to the courts to

change back to their maiden names.

Furthermore, the petition can only be allowed

when the marriage has already been declared null

and void or after its annulment; a judicial

declaration of legal separation, provided, that there

has been no manifestation or reconciliation filed

with the court; and a judicial declaration of

On the deaths of

Senator Nancy expressed her outrage over the deaths

of several minors in the Administration’s ongoing war

“The deaths of these children are extremely enraging

and brought me a heavy heart. And like every parent, I

fear for the safety of my children. Kian could have been

my son or daughter, or any policeman’s child for that

Kian Loyd delos Santos, a 17-year student who was

killed in Caloocan City last week, was the latest victim of

the war against drugs who died in the hands of police

Kian was the latest addition to the list of minors who

were fatally killed in the drug war, and who were either

Children are paying for the price of a fumbled police

operation. Since last year, the anti-drug campaign has

claimed the lives of 5-year old Danica May Garcia; 5-year

Binay, a mother of four, said that no amount of

apologies would bring back the children to their parents.

as well as poultry and gamefowl farms, to conduct and

implement biosecurity measures in light of the avian flu

“This will also prevent the possible transmission of bird

flu from poultry to humans,” she added.

the potential of introducing and spreading of disease-causing

organisms into and between sites.

These include isolation of infected birds; sanitation and

disinfection of facilities and people; and controlling traffic of

people and flocks in and out of the farm.

The lady senator also called on the Department of

especially the records and documentation of poultry farms.

transmission from birds to humans, signs and symptoms nito,

The Department of Tourism (DOT) could still reverse

the foreign visitor downtrend if it would only start reassessing

its strategies of promoting the country as a

tourist destination abroad, and focusing also on the

Senator Nancy Binay today said it would be best to redirect

marketing on the local market instead of spending

taxpayers' money on advertisements that are counterproductive.

It’s also another growth area in terms of tourism.

The lady senator said that focusing on the domestic

tourism could stem the shortfall that the country may

experience due to the negative perception of the

She added that the DOT may have a hard time promoting

the country abroad due to what is happening in the country

“It is our country which suffers from the negative image

According to the Philippine Statistics Authority (PSA),

resident visitors within the country either as a domestic trip

or part of an international trip, the PSA said.

In 2012, the National Statistics Office (NSO) said that four

out of 10 Filipinos aged 15 years old and above travelled

An estimated 25.7 million Filipinos who are 15 years old and

above had travelled within the country, the 2012 Household

According to the same survey, more than half or 53.7% of

the domestic tourists were aged 15 to 34 years old. 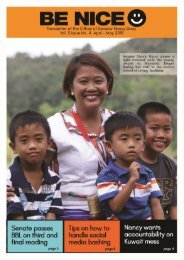 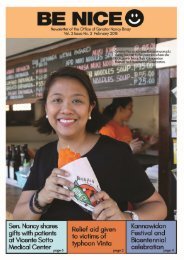 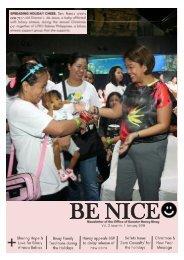 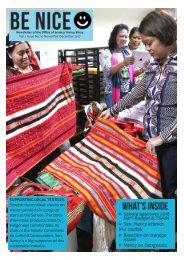 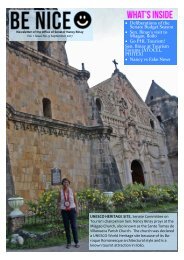 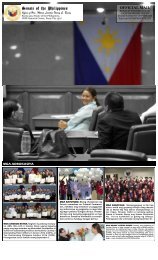 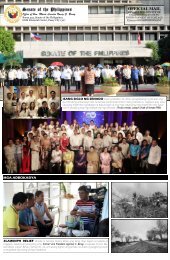 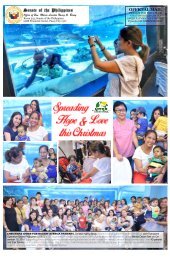 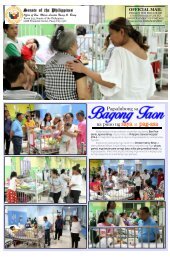 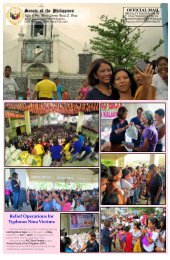