supply secure and reliable. This second Annual Report will bring you up to speed

on the status of those recommendations.

First a quick recap. The WSAC – a group of 14 residents who were appointed by

into the City’s water system. The WSAC identified the water supply gap that

needs to be filled, and made several recommendations for potential solutions.

The WSAC finished their work by making the following recommendations

recommendations at the same time, so that by 2020 a fully informed decision

can be made on which recommendation(s) to implement.

That brings us to 2018. What’s happened since our last report?

Customer water use continued to trend lower in 2017,

• Doubled the number of workshops and trainings

we provided for the public and partnered with

• Designed and implemented a pilot project to assess

the feasibility of Advanced Metering Infrastructure

• Produced and distributed an award-winning

• Reached a milestone of 10,000 plumbing retrofits

on resale properties since our retrofit program

• Became the first utility in the nation to earn

operations and management from the Alliance

In 2017, we made significant progress on Aquifer Storage

the technical feasibility, as well as a study to identify potential

The most significant finding of the feasibility analyses is that

there does not appear to be a “fatal flaw,” on paper, with

can be used to both inject

surface water into an aquifer,

and also to withdraw

from it? Not so with

What kinds of things could prevent ASR? For example, negative

results from a study of whether adding surface water to

injection and recovery rates will be within the parameters

needed to cost-effectively build and operate the project.

So far, none of these fatal flaws have been identified.

Up to an acre of land can be required for new wells, pumps,

treatment and maintenance. Also, the well must be located

where water can be injected into the water-bearing strata

of an aquifer, and new wells can’t be placed too close to

In 2017, a Memorandum of Agreement was signed with the

and Santa Cruz County to evaluate potential opportunities for

conjunctive use of surface and groundwater resources.

water (creeks and rivers) and Soquel Creek and Scotts Valley

Lorenzo Valley water supply is a combination of surface

water and groundwater. The chemistry of surface water and

groundwater is different, and may require different treatment.

In 2017, in-depth analyses began to study the compatibility of

using surface water in a groundwater system, and vice versa.

In particular, the studies are looking at the potential for the

release of lead, copper or iron that may exist in household

plumbing, which could be triggered by switching source

water sources. Results of the analysis will determine the future

course for water sharing with other districts.

means to use groundwater and

During an 18-month study that began in 2016, we looked at more than

40 options for using advanced-treated wastewater from the City’s

We also updated the existing desalination project assumptions and cost

and desalination – with current information.

RECYCLED WATER: DID YOU KNOW?

The City of Santa Cruz Wastewater

of treated wastewater into

the bay every day.

Treated recycled water has many uses, and we looked at several of

them during the past year. From irrigation, to being pumped up to and

blended with water stored in the Loch Lomond Reservoir, to being

treated and injected into aquifers, the results of the analyses have

for a final recommendation.

DESAL: DID YOU KNOW?

was amended in 2015 with a specific

approach to design and operate new

comments made in the 2013 project Environmental Impact Report,

along with new environmental regulations and direction from the

WSAC, to update the desalination project scope. Based on the amount

dry years, the updated scope reflects a bigger desal project as well as

The Water Commission meets on the first Monday

of every month and the public is encouraged to

attend. Meetings are at 7 pm and are typically held

confirm the location and preview the agenda.

A joint meeting of the Water Commission and the City

Council will be held on April 10 to update the Council

on progress made on the WSAC recommendations. The

meeting will be at 7 pm in the City Council Chambers –

Sign up to receive the monthly WSAC update email 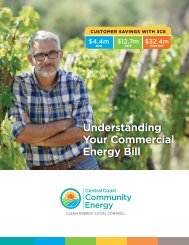 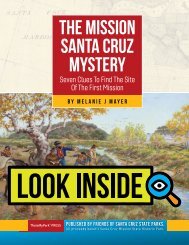 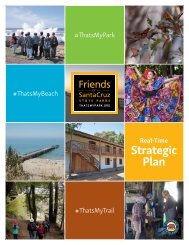