Dual Frequency envisions artist initiatives to steer creative culture in support of their communities. Many participating artists curate, organize, perform, and teach as expansions of their individual practices. This exhibition activates the Art and Culture Center with interdisciplinary work from 14 preeminent South Florida artists selected to receive awards in 2017 of either $15,000 or $7,500. These awards are among the largest of such honors accorded by local arts agencies to visual and media artists in the United States. The South Florida Cultural Consortium is the largest government-sponsored grant program for artists living in Broward, Martin, Miami-Dade, Monroe, and Palm Beach counties. It provides significant support to individuals who contribute to the cultural fabric of a vibrantly expanding arts community with no strings attached.

Dual Frequency envisions artist initiatives to steer creative culture in support of their communities. Many participating artists curate, organize, perform, and teach as expansions of their individual practices. This exhibition activates the Art and Culture Center with interdisciplinary work from 14 preeminent South Florida artists selected to receive awards in 2017 of either $15,000 or $7,500. These awards are among the largest of such honors accorded by local arts agencies to visual and media artists in the United States.

The South Florida Cultural Consortium is the largest government-sponsored grant program for artists living in Broward, Martin, Miami-Dade, Monroe, and Palm Beach counties. It provides significant support to individuals who contribute to the cultural fabric of a vibrantly expanding arts community with no strings attached.

creative culture in support of their communities. Many

teach as extensions of their individual practices. This

and proposals in an overarching stream-of-conscious

narrative. I declare that a zinealog is a hybrid zine

subject matter and a survey of supplemental studio

are gracious with their time and will receive awards

The South Florida Cultural Consortium is the largest

support to individuals who contribute to the cultural

fabric of a vibrantly expanding arts community with

“It is exciting how this year’s SFCC artists highlight

a diverse range of collaborative practices, from IRL,

to Obsolete Media Miami, to Tile Blush, to Exile

archives or production agencies – it demonstrates

an effort to make a larger impact with their work

and create a sense of community. It’s generative.

While this is not a phenomenon isolated to South

Florida, this development nevertheless signals a

among our region’s artists.”

Detail of and sketch for Neon Library, 2017

Site-specific installation at the Art and Culture Center/Hollywood

Publicity Photo of the Artist for Centennial Everglades National Park

Performance, The Furies of the Swamp, 2016

through AIRIE’s Wild Culture Sundays in the Park Program

Boca Raton Museum of Art in collaboration with Eddie Negron

Image of studio table, 2017, courtesy of the artist

Image of the studio, 2017, courtesy of Laura Marsh

Image of the studio, 2017, courtesy of Laura Marsh

Raheleh Filsoofi is a Boca

and video – in a holistic sensory

BFA in Studio and Craft from Al-

a Masters of Fine Arts in Ceramics

Anar, the group exhibition of Iranian

Alan Gutierrez is a Miami-based

transform an every-day environment into

a set, treating artworks as props and

blurring the line between performance

BFA in Sculpture and Art History from

the University of Florida, Gainesville.

and internationally, with recent and

exhibitions include Don’t tell someone

something because they may stop

me better than you, Locust Projects,

include An Image, Miami Beach

media profiles as a means to explore a parallel

universe, similar to a “pick your own adventure”

style of video games where the player decides

their own fate. She received her BFA in Studio

Based Media and Photography from Florida

exhibitions include Moist, The Jacqueline

Is this what they mean when they say it’s

the Betty Laird Perry Award for the Frost

Aramis Gutierrez is a Miami-based

painter and co-founder of Tile Blush,

which is about to transform its name for

and Guccivuitton Gallery. Named after a

soft pink hue that the artist utilizes in his

their practices in the next rebranding

of the venue. Working in oil on canvas,

Gutierrez sources imagery from the genre of

historical cinema. He received his BFA from

The Cooper Union for the Advancement of

Recent exhibitions include End Order of

Hour of My Life, I’m Falling in Love Again,

exhibitions include All F@*#ing Summer, Gavlak

NO. 203, Spinello Projects in Catalog, New

Gouveia often begins with imagery inspired by the natural landscape of South Florida,

which she then manipulates through the experimental digital printing process. The final

prints obliterate most of the original representational content, becoming oscillating

Brazil, Gouveia obtained a BS in Industrial Design from Sao Paulo, Brazil, and an

Art Center, Takoma Park, MD (2016); Postcard-Resemblance in a State of

has received multiple awards/residencies such as: Virginia Center for the

Jenny Larsson is a Hollywood-based performance

artist and founder of Wild Beast Collective. Her

performances in conjunction with time-based

media and video. Larsson was born in Sweden, and

from the University of Dance and Circus in

an MFA in Dance from the University of Wisconsin-

Milwaukee. Solo performances include the Nature

and the Girls’ Club, Fort Lauderdale. She has

also performed and worked alongside Gabriel

Foresteri/project LIMB for a performance called

and Dancers as a dancer in the company

including the Creative Investment Program

(CIP) from the Broward County Cultural

the 2017 Artist in Residence in Everglades

Amanda Keeley is a

of Exile Books. By activating

provides a platform for artists

and small presses to promote

their work in print. Her studio

work is multidisciplinary and

She received her BA from

the University of Vermont in

Burlington, Vermont, and her MFA

in Sculpture from Parsons School

of Art and Design in New York City.

and Stories of Vizcaya, Vizcaya Museum,

history, classic myths, and literature with ties to the wilderness. The naturalistic elements

of her works are greatly inspired by the Florida Everglades, which she often explored

as a small child when she moved to Miami from Stockholm, Sweden. She received

her BFA in Painting in 1988 from the Maryland Institute’s College of Art, graduating

has received grants from Funding Arts Broward and the Broward County

Roberta Marks is a Key

as suitcases and shoes

collected from her time in

that create a point of reflection

for both cultural, spiritual,

and personal narratives. She

received her BFA from the

MFA from the University of

include the Key West Museum

include Circle of Friends, Hal

Keys Council of the Arts, Key

View, The Arts Council of Martin

She has been an instructor and

lecturer at many locations around

the world, including the American

Embassy in Bern, Switzerland, the

Lowe Art Museum at the University

of Miami, and the Ministry of

Vincent Miranda is a Fort Lauderdalebased

artist and is a current graduate

student at California College of the Arts

the manipulation of fiber to create tension

and texture and employ experimental

surface treatments such as acid washing.

He received his BFA in Sculpture from

Award Winner for the 63rd Annual All Florida

Juried Exhibition and he won Best in Show at

the Juried Student Exhibition at FAU.

artist. Both her two-dimensional stamp works

and her mixed-media assemblages feature

allusions to femininity, botany, and Haitian

mythology. She was born in Brooklyn, New York,

and received her BFA in Visual Arts from the

School of Visual Arts in New York City in 1997.

Recent solo exhibitions include The More I Let Go,

The More I Am Home, Little Haiti Cultural Center,

Culture Center of Hollywood (2009); and Beautiful

Collision, Miami (2007). Other projects include

Julian Yuri Rodriguez is a Miami-based

With a strong commitment to community

of masculinity, his own Cuban heritage,

and perceived assumptions about the

with his grandmother’s memories

of living there decades earlier. The

project received recognition at the

films were screened as part of the

Marla Rosen is an artist and curator

who lives in Davie and is the co-founder

of the Miami-based alternative exhibition

surfaces that alter the viewer’s perception.

largely collaborative with her partner Eddie

Negron, working mainly under the name

NegronRosen. She was born in Los Angeles

and received her BFA in Sculpture from the

University of Florida in Gainesville in 2014.

(2016). Rosen has received multiple awards and

scholarships, including the University Scholar

Award and an Honorable Mention in the 2013

Juried Student Show at the University of Florida.

Barron Sherer is a Miami-based artist

and co-founder of Obsolete Media, a

repository in the Design District for 35mm

other legacy media. His large-scale installations

and reference his experience as an archivist and

from the University of South Carolina in 1991. Selected

(2015). Sherer has organized and produced cultural events including

We are delighted and honored to present Dual Frequency,

Each year, more than 300 artists who live and work

throughout the five county region submit their applications

for consideration. Submissions are grouped by county.

A regional panel of visual and media art experts from

South Florida convene to provide an initial review of

the submissions. These recommendations are forwarded

to a national panel who is given the responsibility of

based on individual accomplishments as evidenced by

the work submitted for review, with the highest premium

placed on coherent bodies of work. The national panel’s

recommendations are reviewed and ratified by the South

We congratulate this year’s winners and thank all of the

our region’s visual and media artists.

The Art and Culture Center/Hollywood provides a venue

for the arts through its gallery exhibitions, artist lectures

and workshops in its renovated 1924-circa Mediterranean

revival home as well as offering education programs and

performances. The Center, which is celebrating its 42-year

anniversary, is the third oldest arts nonprofit in Broward

County and is one of just eight organizations, out of more

than 800 art and cultural entities in Broward County,

to be designated a Major Cultural Institution by the

Please enjoy this exhibition and zinealog, which celebrates

the works of these award-winning artists.

Zinealog created and designed by Laura Marsh, curator of exhibitions,

at the Art and Culture Center/Hollywood.

South Florida Cultural Consortium is funded in part by The

National Endowment of the Arts, The Florida Department of

State, Division of Cultural Affairs and the Florida Arts Council,

the Boards of County Commissioners of Broward, Miami-Dade,

Martin and Monroe Counties, and the Cultural Council of Palm

Beach County. The Art and Culture Center/Hollywood is a

501(c)(3) non-profit organization supported in part by its

the Broward County Board of County Commissioners as

recommended by the Broward Cultural Council; the State of

Florida, Department of State, Division of Cultural Affairs, the

Florida Council on Arts and Culture; the David and Francie Horvitz 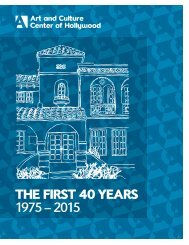 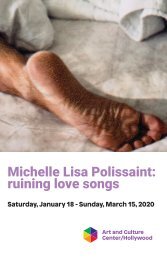 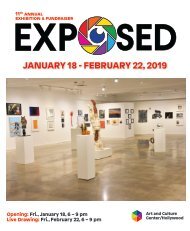 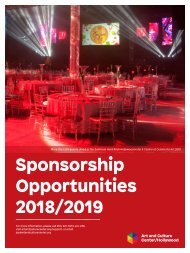 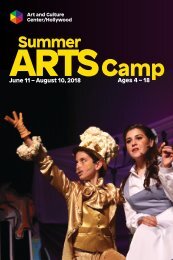