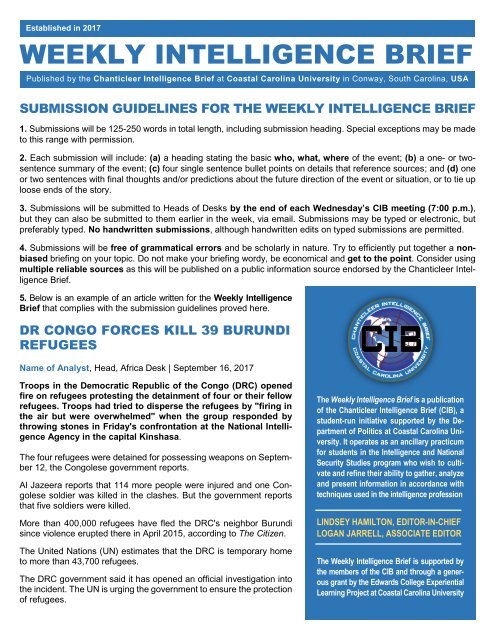 Please follow these guidelines when submitting stories for publication in the CIB's Weekly Intelligence Brief.

Please follow these guidelines when submitting stories for publication in the CIB's Weekly Intelligence Brief.

1. Submissions will be 125-250 words in total length, including submission heading. Special exceptions may be made

to this range with permission.

2. Each submission will include: (a) a heading stating the basic who, what, where of the event; (b) a one- or twosentence

summary of the event; (c) four single sentence bullet points on details that reference sources; and (d) one

or two sentences with final thoughts and/or predictions about the future direction of the event or situation, or to tie up

loose ends of the story.

3. Submissions will be submitted to Heads of Desks by the end of each Wednesday’s CIB meeting (7:00 p.m.),

but they can also be submitted to them earlier in the week, via email. Submissions may be typed or electronic, but

4. Submissions will be free of grammatical errors and be scholarly in nature. Try to efficiently put together a nonbiased

briefing on your topic. Do not make your briefing wordy, be economical and get to the point. Consider using

5. Below is an example of an article written for the Weekly Intelligence

Brief that complies with the submission guidelines proved here.

Troops in the Democratic Republic of the Congo (DRC) opened

fire on refugees protesting the detainment of four or their fellow

refugees. Troops had tried to disperse the refugees by "firing in

the air but were overwhelmed" when the group responded by

throwing stones in Friday's confrontation at the National Intelligence

Agency in the capital Kinshasa.

The four refugees were detained for possessing weapons on September

soldier was killed in the clashes. But the government reports

that five soldiers were killed.

More than 400,000 refugees have fled the DRC's neighbor Burundi

since violence erupted there in April 2015, according to The Citizen.

The United Nations (UN) estimates that the DRC is temporary home

The DRC government said it has opened an official investigation into

the incident. The UN is urging the government to ensure the protection