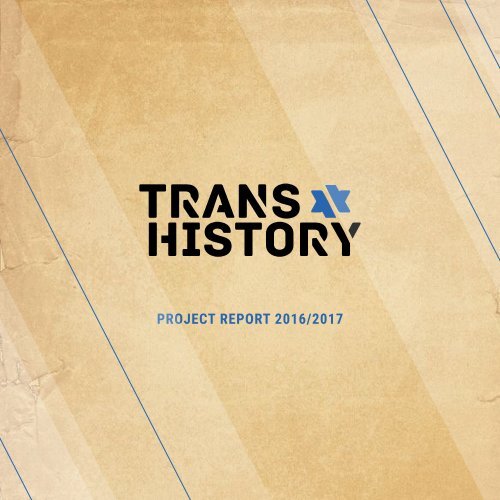 for teachers and civil society multipliers in

Ukraine and Moldova. With our local partners,

Our goal is to connect Ukrainians

and Moldovans to their country’s

believe that cultural exchange is

values and to encourage critical

thinking and a balanced culture

NGO “International Center for Training and

useful, as they help to develop the creativity

The seminar was a great opportunity to

communicate with other representatives from

abroad, and sharing experiences. The project

Trans.History films Centropa is an effective

of people. This is very important. Some

of these people are still alive and they are the

education this is much more powerful than

reading a book or a magazine article.

This kind of events give us an opportunity

to better understand the Jewish culture and

traditions of the Jewish nation. Thank you for

the opportunity to strengthen my knowledge

and skills, for the possibility to use methodological

materials and methods of Centropa.

The main difference between Centropa seminar

and other seminars I have attended is the

fact that we have received a lot of different

materials as well as different viewpoints and

not just a subjective approach.

including the methodical materials of my

colleagues and their experience.

for teachers and multipliers from

and show the importance of civil

The tools we use:

survivors for Ukrainian and Moldovan

Exhibition visited by more than 2.000

and civil society for Ukrainian and

3 training seminars in Ukraine and

Usage between May 2016 and April

and Poland listened to lectures on Ukrainian

discuss how to use our two Ukrainian Centropa

films, and visited our new exhibition "A

Commemoration with the German and Ukrainian

presidents and other dignitaries.

The more we speak with youth in an open way, the less anti-Semitism we will have.

Children need to be attracted to Holocaust studies. If they study it themselves, they

will become empathetic and will not stay indifferent.

seminar for Moldovan educators in Chișinău.

45 educators and NGO representatives from

Moldova joined by delegations from Ukraine,

Poland, and Germany. During this seminar the

participants were introduced to Centropa’s

Moldovan interviews and photographs, and attended

various lectures and workshops about

classes. As part of this first seminar in

in Moldova was launched.

Trans.History and Centropa web-sites are user-friendly and I have found a lot of

interesting information, that can be used not only during the classes of History and

Civic Education, but also for the extracurricular activities. I hope you will add more

materials on the local history in the context of World history.

Institute and Mnemonika, conducted the

fourth Trans.History seminar in Ukraine. Over

society activists, and journalists from Ukraine,

During the seminar, the winners of the Ukrainian

and their winning films were screened to the

joined a walking tour of Jewish Lviv and had

plans and projects and brainstorm about

setting up cross-border partnerships and

introducing social media to their classrooms.

The Tools we use

At the seminar in Kyiv in September 2016, we

introduced new participants to our exhibition

Album”. On 15 panels, features excerpts from

Holocaust survivors. Through photos and

stories, our interviewees tell us about their

The second section, “In Dark Times” , has

panels with stories and pictures of the

Holodomor, the Holocaust, Babyn Yar, and

evacuation. The interviews and photos are

put into context by historical maps and other

background information. Until today, the

exhibition has been shown in 15 Ukrainian

locations. The exhibition is accompanied by a

bilingual brochure which is also available as

Since the launch of the exhibition during the

Kyiv seminar in September 2016, the exhibition

has traveled to 15 schools throughout

Ukraine and continues to be booked out.

Based on our interviews with Jewish Holocaust survivors, Centropa has produced close to 50 short

multimedia films. While these films build the core of our education program, and are ideal for classroom

use, they also appeal to a larger audience, and have been shown at Film Festivals worldwide.

For Ukraine and Moldova, we have produced four short films that are now used being used in

schools, libraries and community centers all over Ukraine and Moldova.

Film: “The Story of Ivan Barbul”

Ivan Barbul was born as Isaak Rybakov in

1929 in Rezina, which was a mostly Jewish

town in Bessarabia at that time. He grew up in

a poor Jewish family, with his father working

at the local Jewish school. During World War

II, his family was deported to Bogdanovka, an

infamous labor camp in Transnistria. While his

14, managed to survive thanks to Ivan Ilich

Barbul and his wife Agafia, who adopted Isaak

and gave him a new name, and a new life.

NC. But these two kindly grandmothers were

born in the bustling city of Rivne—then in Poland,

in Rivne, but when the German Wehrmacht and

the Waffen SS stormed into town, they planned

on murdering every Jew they could find. How

Shelly and Raya survived the massacre is a story

they tell themselves, not long after they visited

With old photographs and exquisite, custom-made

After I showed my students “Return to

Rivne”, the discussions after this film

lasted almost 2 hours and were very

Film: “The Story of Tamara Koblik”

then belonged to Poland. She grew up in a traditional

sister. But the Soviets took eastern Poland in

in Hashomer Hatzair earned her a ten year

sentence of hard labor in Siberia. The rest of

her family remained behind, not knowing that

the Nazis would overrun the town soon after

Haya-Lea’s deportation to the east.

The story of how a Jewish family from

Rezina was torn apart during the Holocaust.

When World War II came and the Germans

approached, Tamara and her parents fled on

a train to Makhachkala. But while Tamara and

her mother survived in evacuation, her father

was taken to the Gulag, where he perished.

Tamara´s Grandmother and cousins were first

forced to live in the Rybnitsa Ghetto and were

had liberated Bessarabia in 1944, Tamara and

her mother returned to Chisinau, where they

started a new life, and where Tamara Koblik

eventually raised her own family.

While we encourage Ukrainian and Moldovan

students to use digital technologies to explore

their country’s Jewish history, not all schools are

able to provide the necessary infrastructure for

such tech-driven projects. That is why we invited

one of our most creative teachers from Romania,

Horatiu Suciu, to run a workshop during our Chisinau

a best-practice example on how to students

created a graphic novel based on a Centropa

biography which the teenagers had found on

Centropa-related projects such as a student film

festival. More than 70% of the seminar participants

watch something than read something. The images speak for themselves.

This way you have more time and they can work at home as well.

The video competition for students from

Ukraine and Moldova was the chance for

young people from schools and the universities

to create a video on two topics:

2. “The importance of Civil Society”

The participants were challenged to create an

innovative and creative film of around 7 minutes

which presented one of the two topics as

a historically accurate and interesting story.

Cenropa provided them with video guidelines

and practical tips on how to create videos.

The Trans.History team received around 12

videos from schools in Ukraine and Moldava,

the majority of them focusing on “Our Town’s

Jewish History”. All videos showed that the

students had risen up to the challenge and

provided a new and creative insight into their

Category: “The importance of Civil

ö ö “Goodness and Evil – who is the winner?”

or computer equipment and were presented .

during the Trans.History seminar in Lviv on

All films can be viewed here:

With headquarters in Berlin and a network of 229 missions

relations with other countries as well as with international and

than just political contacts among governments and parliaments.

Because Germany and German society are enmeshed in

promotes intensive interaction and exchange with the world

in the fields of business, culture, science and technology, the

an intergovernmental body whose purpose is to place political

and social leaders’ support behind the need for Holocaust

education, remembrance and research both nationally and

The US Diplomatic mission to Ukraine started on January 22,

1992, and today is comprised of approximately 181 Americans

and more than 560 Ukrainians, representing more than a dozen

US Government departments and agencies. The Public Affairs

Section of the U.S. Embassy, in conjunction with the State Department

programming throughout the year.

Society Initiatives Institute is a team of committed young professionals

whose activities are aimed at development of civil

society. For this purpose, the organization implements projects

in the field of community development, creates opportunities

for youth, and conducts special trainings and courses for public

with state organizations and institutions, with businesses

and citizens in order to develop civil society in Ukraine. The

organization has 4 regional offices (with headquarters in Lviv)

and more than 400 volunteers.

International Center of Training and

is a grassroot non-governmental organization registered in

Moldova in 2003. ICTPD has a Useful Activity Certificate issued

by the Ministry of Justice.

The main goal of Mnemonika’s activity is scientific studies of

into the sphere of memory politics in Ukraine.

Centropa is a non-profit historical institute

to connect 21st century students to

20th century Jewish history – and with each

other. Since 2000, Centropa has interviewed

Central and Eastern Europa, and collected

and scanned their family photos. Centropa

then turned some of the most compelling

biographies into short multi-media films that

about European-Jewish family stories, as

are between 3 and 30 minutes long and can

in the US, Europe and Israel. The highlight of

our education program is the Annual Summer

Academy, which brings together up to 90 educators

from 18 countries for a 9-day travelling

workshop through Central Europe. During this

plans and materials based on Centropa

resources – while they meet with historians,

journalists and politicians, and turn the city