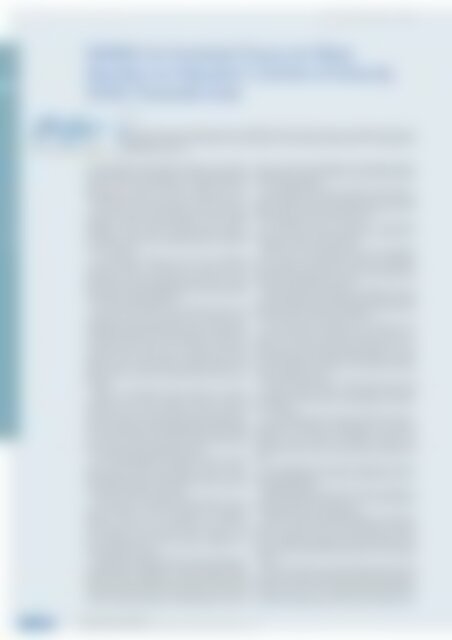 INSIDE NUCLEAR WITH NUCNET

WANO to Increase Focus on New

Nuclear as Industry’s Centre of Gravity

the Middle East and Asia.

and the United Arab Emirates are giving WANO the

opportunity to make sure those countries start the

operational life of their new units “in a very positive way”.

He said the rate of new-build in these new nuclear

markets means there could be challenges, even for existing

companies, related to rapid expansion. There could be

challenges to the ability of some expanding companies

to provide experienced and qualified people to staff their

operation, WANO is working more closely with the

International Atomic Energy Agency (IAEA). One of the

the infrastructure and capability they need to have nuclear

power as part of their energy mix.

440 nuclear reactor units in more than 30 countries, has

developed a strong relationship between its London office

and IAEA headquarters in Vienna to ensure that experience

is regularly shared. He said: “The IAEA gets involved with

new entrants a lot earlier than we do. They are focusing on

member countries and setting up infrastructure, while

WANO needs to engage when new-build contracts get

signed. The aim is now to have WANO involved as early as

period from the start of contractual work to commercial

operation, and aim to help utilities and companies during

with the IAEA is part of WANO’s Compass plan, which

was conceived in 2015 and updated at this year’s biennial

The revised schedule for Compass, which also includes

plans to make WANO more effective in areas such as

life-extensions and decommissioning of plants, is 2022.

The original Compass ran until 2019, but that target has

Earlier this year the IAEA and WANO agreed to increase

their cooperation to strengthen operational safety and to

support countries that are planning or considering

Increasing the efficiency of the reviews will be particularly

important in anticipation of the increasing number of

chairman Jacques Regaldo said at the time. “By 2030, half

of the nuclear power reactors will be based in Asia, and we

will have many newcomers to nuclear power,” he said.

“There is real value for WANO to work together with the

IAEA and others to help maximise the safety and reliability

In an August 2017 report the IAEA said it foresees a

and in northern, western and southern Europe, with only

But significant growth is projected in central and

eastern Asia, where nuclear power capacity is expected to

WANO has been discussing plans for a new regional

centre in Asia to meet demand for expertise and missions

already has regional centres in Atlanta, Moscow, Paris and

Tokyo, with a head office in London.

WANO has decided to look into the possibility of setting

up a new regional centre, starting with a proposal to open

a branch of the London office in Shanghai. The main aim of

this office will be to develop local expertise.

The second phase of opening a new regional centre

would then include converting the branch office into a

support centre which would provide support services to

other regions. These initial preparations depend on a vote

by WANO members, probably in 2018. When the support

centre is operating as it should, it would become a fully

its Chinese members about “the sharing of financial

responsibility” for funding the Shanghai office through the

At its biennial general meeting, WANO discussed the

organisations “have huge responsibilities” to ensure that

The organisation also started a discussion on how it

should be supporting units when they approach the end of

Members spoke about the need to increase cooperation

amongst like-minded organisations such as the IAEA and

WANO recently announced the signing of a cooperation

(IYNC), recognition of the fact that WANO needs to find

ways to transfer knowledge from people who have been in

Mr Prozesky said it was “quite sobering” to talk to young

operators in control rooms today and find that some of

them weren’t born when the Chernobyl accident happened

accumulated knowledge and the industry’s experience to

Inside Nuclear with NucNet