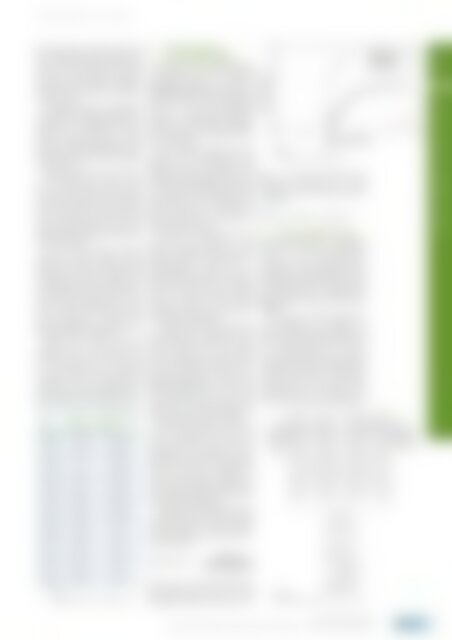 tests have been performed with only

DVI-2 (farthest from the broken cold

leg), only DVI-4 (closest to the broken

The bypass fractions of the MIDAS

experiment for the test conditions are

presented in the Figure 3. The test

results show that the ECC bypass

fraction is highly dependent on the

to the broken leg as well as the injected

Injecting through the nozzle closet

to the broken leg (DVI-4 tests)

show that the direct bypass fraction

increases drastically for a steam flow

rate above 0.7 kg/s. This is expected

since at a higher steam flow rate, the

relative speed between the two fluid

streams becomes higher resulting in a

On the other hand, injecting

through the nozzle farthest to the

decreases the bypass fraction, and

accordingly most of the injected ECC

water penetrates into the lower downcomer.

This is primarily due to the

the two streams. As a result of the

With both nozzles activated

increases with steam flow rate but

at a much slower rate as compared

to that of DVI-4 tests. This may be

between the injected steam and

ECCS stream for the combined case.

for the SPACE Code

A SPACE model of the MIDAS facility

is developed with three different

nodalization schemes as shown in

Figure 4 to Figure 6. The downcomer

is modeled as an annulus component

analysis for the ECC bypass phenomenon

was performed using the SPACE

For the KREM which has best

RELAP5 code, the downcomer was

represented with 6 channels [4]. The

comparison with MIDAS test results as

a part of the code validation showed

that RELAP5 code over-predicts the

cases while predicts reasonably for

and CL-3) are connected to the

junction with branch components. A

time-dependent volume and a

time-dependent junction were used to

admit the steam flow rate through

(CL-4) is connected to the annulus

with a branch component.

The DVI nozzle (DVI-4) closest to

the broken leg is connected to the

same hydraulic channel as the break

(CL-4) whereas the DVI nozzle

(DVI-2) farthest from the break shares

the same hydraulic channel as the

Figure 4 to Figure 6. The drain valve

was modeled using a trip valve

component which would open if the

water level of the lower downcomer

becomes higher than the set point.

which are located between CL-1 and

respectively, are modeled as blunt

bodies that penetrate the downcomer.

The flow areas were calculated by

using the gap width, perimeter, as

well as other geometric parameters at

this section to estimate the equivalent

is calculated based on the flow rates

and drain flow rate at the lower downcomer

flow rate, and M Condensate is the

The model predictions of the bypass

fraction for all three nodalization

compared to the experimental data.

The sample standard deviation of the

Mean Square Error), are presented in

For the case with DVI-2 injection

relatively small and acceptable for all

as a representative case. For the

injection through DVI-4 only (KM110

bypass fraction. This is more distinct

at lower steam flow and for finer

the cases with injection through both

where, M SI_in is the total ECCS injection