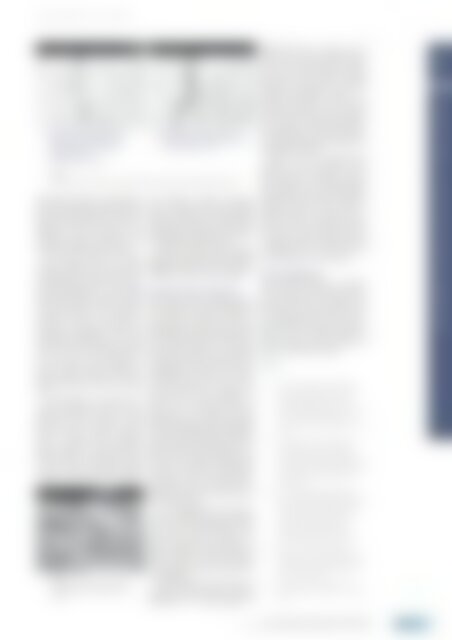 a) Stress corrosion cracking in the heat

affected zone of a welding seam:

TSS Experiment at Asse salt mine

tests were terminated after about 500

days, therefore an increase in the pit’s

depths as determined in the case of

Hastelloy was not observed. The

average pit depth of both steel was

(a) and immersed in NaCl solution.

Localized corrosion was found in

both cases, even in the almost dry

con ditions established in the TSS

experiment performed in the Asse salt

mine [22]. The penetration depths

of the cracks were measured in

under γ-irradiation of 10 Gy/h were

pool at Dido test reactor at the

types of samples were examined:

on the surface, U-shaped welded

Intergranular corrosion in a Ni-Resist D4

sample after 776 days in MgCl 2 solution

b) Stress corrosion cracking of a plane

such as tungsten inert gas welding

Significant deviation of the observed

mass losses in comparison to test without

irradiation were not found.

(Figure 7). These referred to samples

as delivered and to crevice samples.

The results of the corrosion experiments

with Cr-Ni steels, Hastelloy and

the Ni-Resist materials revealed a

the fine-grained steels. On the other

hand, these materials were subdued

to localized corrosion processes such

processes were enhanced in

many cases, the localized corrosion

phenomena were found only after

in the case of Hastelloy, the incubation

MgCl 2 solution and the pitting corrosion

corrosion of the Cr-Ni steels penetrated

deep into the materials. Intergranular

corrosion was also found in

As a consequence of the occurrence

as well as the unpredictable incubation

times of these processes, one

waste canisters, even if the general

corrosion rate would be by a factor up

The mass loss is proportional to the

conditions in a deep disposal. A

POLLUX cask has a surface area of

about 30 m 2 . Under extreme conditions,

15 kg of steel could be corroded

per year in NaCl solution, forming

increasing pressure it acts as driving

force for gas, solution and contaminant

are undertaken to reduce the potential

amount of hydrogen produced by

Based on the measurements

reported in this contribution, Cr-Ni

steels seem not to provide a reasonable

solution for a long-lived stable

waste package. Even, if the hydrogen

production is reduced, the long-term

sealing function of these steels is

unclear. Under the almost dry condition

of the in-situ experiment (TSS)

in the Asse mine, stress corrosion

cracking in the heat affected zone of

a welding seam of Cr-Ni steel was

The corrosion studies of canister

by Dr. Emmanuel Smailos and

his working group. Until his retirement

for the corrosion studies of

various materials at the Institute for

Conditioning of spent fuel for interim

and final storagein the pilote conditioning

plant (PKA) at Gorleben, in

International Symposium on Storage of