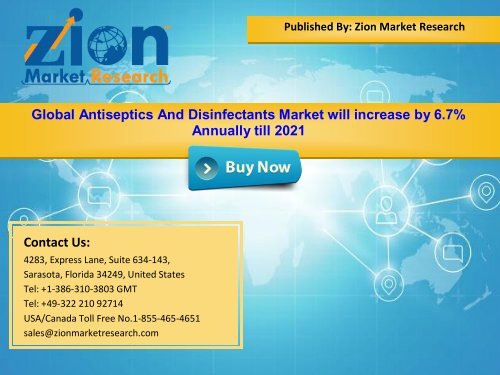 Antiseptic is the chemical substances that are used to kill the pathogenic micro-organism in or on the surface tissue. Antiseptics mainly act by dissolving cell membranes, protein denaturation and cause dehydration of the cells due to evaporation.

Global Antiseptics And Disinfectants Market will increase by 6.7%

Ammonium Compounds, Iodine Compounds and Others) for Domestics, Institutional and

2015 – 2021” According to the report, the global antiseptic and disinfectant

or on the surface tissue. Antiseptics mainly act by dissolving cell membranes, protein

denaturation and cause dehydration of the cells due to evaporation. For example,

chloroxylenol is a chlorinated phenolic antiseptic mostly active against gram-positive

bacteria and used in lubricating cream for vaginal examination; used on obstetrical forceps

or on the surface of objects. Disinfectants mainly act by disruption of cell membranes and

denaturation of proteins and enzymes of the cell. These chemical agents are very effective

against vegetative gram-positive and gram-negative bacteria, mycobacteria, and viruses.

For example, lysol a phenol compound is used as a general disinfectant for domestic or

hospital use like disinfection of floors, bathrooms, washbasins, organic waste such as

The most commonly used products in clinical practice today include povidone iodine,

facilities across the globe. Moreover, the rise in trend of the health club and fitness center is

also expected to drive the antiseptics and disinfectants market. In addition, the keen interest

of young generation towards precaution over the flu, bacterial and viral infections will

probably increase the demand for antiseptics and disinfectants. However, stringent

growth of the antiseptic and disinfectant market.

On the basis of type, the global market for antiseptics and disinfectants is bifurcated into six

ammonium compounds, iodine compounds and others. In terms of revenue, alcohols and

aldehydes accounted for approximately above 35% of total antiseptics and disinfectants,

market. Alcohols and aldehydes have the largest share of the market, worth USD 1.5 billion

In addition, together biguanides, amides, and quaternary ammonium compounds have the

Inquire more about this report @ https://www.zionmarketresearch.com/inquiry/antisepticsand-disinfectants-market

In the end-user segment, institutional segment dominates the global antiseptic and

disinfectant market. Globally, approximately more than 50% of the antiseptic and

disinfectant market has been captured by institutional end-user segment. This growth is

increase in the number of medical professionals across the globe. Hospitals and healthcare

of antiseptics and disinfectants products market in developing countries. Domestic use of

increasing public awareness regarding the potential dangers of microbial infection

In terms of geography, North America was the largest market for antiseptics and

increase in a number of geriatric population in North America followed by Europe. Moreover,

Pacific, Latin America due to the rise in awareness and increase in disposable income. In

addition, this region has an established customer base owing to the following of western

lifestyle towards healthcare and technological advancements. Asia Pacific is a promising 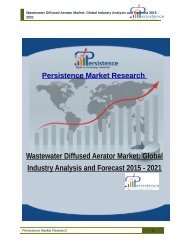 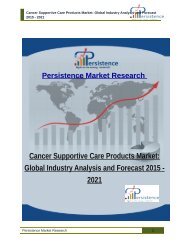