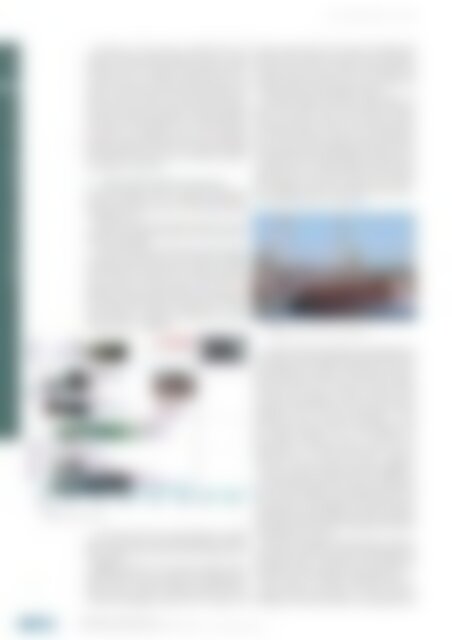 Renovation of the country’s icebreaker fleet will

continue. Currently another icebreaker, Leader, is being

50-m-wide hull over the whole Northern Sea Route. This

wide. Its capacity – 120 MW – would be unprecedented for

icebreakers (though such military ships and passenger

liners do exist). Russia already has an engineering design

ready for the Leader. Negotiations are currently underway

to identify its manufacturer plant and construction

demanded following the start of the Yamal-LNG Project

that “opened new horizons for our national economy”,

according to President Putin.

2 Nuclear power plants for the Arctic

decades of RD&D have not yet yielded any significant

advancement of nuclear sources in this seemingly obvious

Initially, all works related to the development of both

stationary and transportable SNPPs were concentrated in

the USA and the USSR.

At the very beginning of 1950ies, the United States have

for the first time started to pay serious attention to SNPPs,

exclusively because of their army’s interest. Such SNPPs

(with capacities ranging from 0.3 to 3 MW) intended as

energy sources for remote military bases have been

deployed in Alaska, Greenland and even the Antarctic, but

in the sixties all of them have been shut down. In 1968, the

operation since 1974, but the concept of building small

stationary NPPs similarly to large ones was abandoned.

company) considers this NPP, with its low efficiency and

too many workers required per power capita, rather as an

encumbrance than as a prototype for the future.

The global situation with SNPPs is quite similar. The

information on dozens of designs – but virtually all of them

are still paper designs at various stages of development.

There are still no market signals to confirm enthusiastic

forecasts of some experts and companies (such as, e.g., the

for SMRs. Only the 25-MWe CAREM (that demonstrates

obvious features of a prototype ship reactor) and pilot

high-temperature reactors are currently under construction

As for the Soviet Union, it has launched its strategic

R&D on small reactors in the middle of 1950ies. In October

1956, a governmental decision on SNPP deployment has

PAMIR, ARBUS) that have achieved the implementation

stage. However, all these facilities were demonstrationonly.

The only exclusion is the Bilibino NPP with its four

12 MWe water-graphite reactor units. The plant is in

In 1990ies, Russia has adopted a long-ranging decision

of principle: to build a floating NPP (FNPP) to demonstrate

the advantages the nuclear energy offers for remote

isolated regions. This NPP was to be barge-based, factorybuilt

and returned to the special site for every refueling

with proven high reliability and safety, was chosen for

installation at this FNPP. After its start in 2007, the FNPP

construction went on with great difficulties – it has

survived not only the change of the manufacturer plant

and multiple changes of the first operating site

( Severodvinsk, Vilyuchinsk, Pevek), but also what was

Unfortunately, this redesign reduced the capacity and

hence the refueling interval (to 2–3 years) of the FNPP, so

that it had to be equipped with refueling equipment and

spent fuel storage. This contradicts with the key conceptual

requirement, which inhibits any onboard operations

with fuel for future floating NPPs. So today the developers

are facing the task to extend the refueling interval of future

This task is becoming increasingly important with the

in the Russian Arctic – and pertinent to the strategic issue

of supplies to hardly accessible areas and, prima facie, to

the “Arctic vector” of the Russian energy industry [4].

Below follows the opinion of Mikhail Kovalvchuk,

President of the Kurchatov Institute: “In recent years, the

development of Arctic areas became a strategic priority for