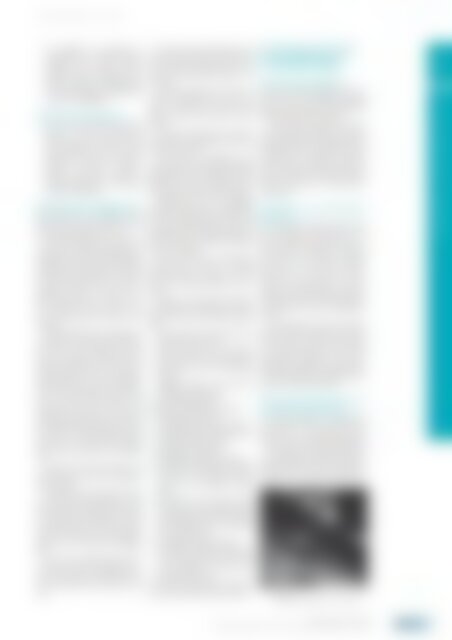 No changing or enlarging of

can be used without changing the

• The task of the Helium cleaning

plant is to clean in a bypass the

helium gas of the primary circuit

from impurities such as solid

graphite dust and the radioactive

Xenon, Argon and Tritium. A

The AVR was the worldwide only

during the commissioning period. As

mentioned, we had a lot of undecided

problems with the unknown behavior

of important components, so mainly

with the absorber rods. We had an

agreement with the TÜV that a

the inherent nuclear safety and

the good behavior of all these components.

the blowers were stopped by quick

stop. The complete power plant was

without electricity, also the reservediesel-engines

were out of operation

and the absorber rods were blocked.

Only the core temperature measuring

was in function. After stop, by the

the temperature falls down during the

next days to normal degrees. Some

days later we re-started the complete

power station without any problem

After this test, full licensing was

granted by the TÜV for the completed

[6] This time all instruments could

be considered and all data were taken

to measure the temperature course

by the simulation of a loss of coolant

accident to develop a calculation program

for such a future case (Figure

had been the simulation of a

worst-case scenario, an MCA, the only

tests in nuclear power stations up to

We knew exactly, that there was no

nuclear risk at all, as the radioactivity

of the primary helium gas was very

low. The coated particles made a very

A similar experiment was done in

was not coated and the reactor not

inherent safe. The result is wellknown.

Also, loss of coolant was the reason

for the MCA in Fukushima, again the

fuel was not coated.

This shows the difference and

advantages of the reliability of pebble

fuel elements with coating of the fuel

particles in case of accidents versus

Compared with the originally

for the AVR power plant of 10 7 Curie

the measured radioactivity of the AVR

in operation with coated particles was

With the Chinese Experimental

successful loss of coolant test was

Further we will install the following

additional installations to safe the

reactor in every case of heavy danger

• Quick extraction of all pebbles

from the core to a special safe store.

• Shut down rods in the graphite

• Gastight design of the Reactor

• No melting of the core is possible.

• The PCPV is safe against terrorism

and other severe attacks and has

proved as an excellent containment.

• The PCPV has proved after decommissioning

as an excellent bunker

for longtime storage of all contaminated

components, up to now for

• Continuous cooling of the pebbles

is not necessary for the new elements,

pebbles in the core, or in

the castors and store.

“The safest Nuclear Power Station is

the most economical Power Station.“

The Secondary electric and/

No nuclear safety regulations are necessary

for every secondary industrial

plant in connection with nearby HTR-

In 23 Years of operation there was

not the smallest radioactive contamination

measured in the turbine part of

the AVR. After the shutdown of the

part had been sold and is still in operation

in another conventional power

station connected to a normal steam

The secondary helium, coming from

the He/He-heat exchanger in the

primary helium circuit, is lead to a

the steam for the steam turbinegenerator

set to produce the electricity.

The steam data are conventional

with a steam pressure of may be

if required two times, reheating to

The temperature of the secondary

helium will be calculated in accordance

with the he/he- heat exchanger

in the primary helium circuit. These

temperatures depend on the cubematerial,

the higher the temperature,

the smaller the heat-exchanger. This is

only an economical question.

No design changes or modifications

are necessary [29]. The same construction

as in conventional power

stations can be designed and installed.

That means a conventional turbine

with temperature entrance of 525 °C,