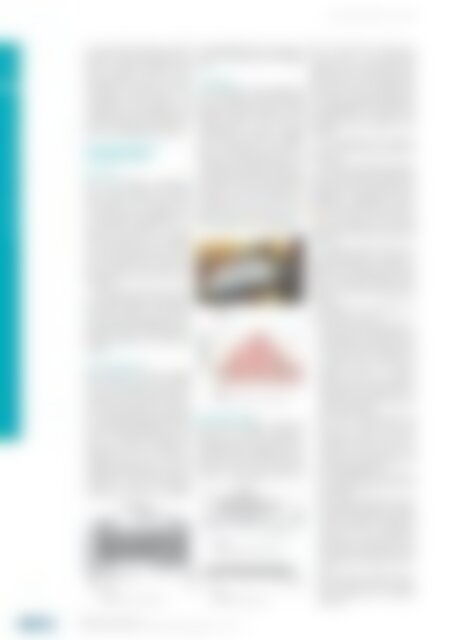 the water-cooled condenser and the

generator. The water leaving the condenser

is pumped through several

heat exchangers, which are fed by

extracted steam from the turbine.

Everything as conventional as in all

components and installations of the

secondary part can be designed as in

There is not a difference in design.

plant can be installed with experienced

will consist of the seawater precleaning

for heating up the water

until evaporation. The distillated

water is free of solid particles, and can

be used as drinking water or for many

other purposes. The residual salt,

brine and further solids can be sold or

A solar plant can be used to reduce

the necessary heat from the steam turbine

during sunshine. The produced

heat in the nuclear part can be nearly

efficiency. The Seawater is

extracted from the sea and precleaned.

The condenser of the turbine, Figure

33, is the first stage to heat up the

necessary in the condenser. The quantity

of cooling seawater, the temperature

rise and condenser pressure must

be economically optimized. The efficiency

of the thermodynamic process

must be calculated. Normally the

temperature rise in the condenser is

quantity of cooling water can vary, for

cooling water quantity is too high for

chematic of a turbine condenser.

the desalination plant, the water can

be released back into the Sea (Figure

can be installed. The solar energy

depends on sunshine intensity, which

depends mainly the daily time and

seasonal periods of the year and

35). The heat from the solar plant

must be transported to the heat exchanger

as second heating stage. This

circuit makes it possible, to reduce the

extracted steam from the turbine. The

safe steam can be used for additional

production of electric energy in the

low pressure part of the turbine by

expension the steam down to condenser

pressure. The solar plant is

plants can be installed, working as

distillation process so as MSF (multistage-flash)-plant

preheated sea-water will be brought

with the steam extracted from the

turbine to a temperature of 90 °C to

streams to the evaporating

number of stages. The distillate

then can be used as drinking water.

With nearly the same technic works

be added as far as necessary, this is

depending from the quality of the

is to be carried out to choose the

The brine, consisting of the chemicals,

salt and other solid components

of the seawater will be evaporated. To

by the sun directly, by solar heat

or by low pressure steam from the

turbine. The solid parts will be dried

and stabilized. Then they may be sold

An analysis should be carried out,

which demonstrates the influence of

on the efficiency and the costs of

the plant and their thermodynamic

Advantages of co-generation of

• The use of pre-cleaned seawater as

cooling water for the turbine condenser

makes it possible to operate

this process without cooling towers

or smaller ones if necessary. All

residual heat from the thermodynamic

electric power, which otherwise is

dissipated in the cooling towers, is

used for pre-heating the sea-water

during the first stage.

from the turbine feeds the

high-pressure line of the turbine

to produce electricity and the residual

heat of the steam is then

used in the evaporating process for

• The thermodynamic efficiency of

the combined processes can reach

• The combined feeding of the evaporators

by steam from the turbine

and with heat from the solar plant

makes it possible to operate the

evaporators of the desalination

time for this high investment

• The solar plant replaces the extracted

steam from the turbine.

More electricity can be indirectly