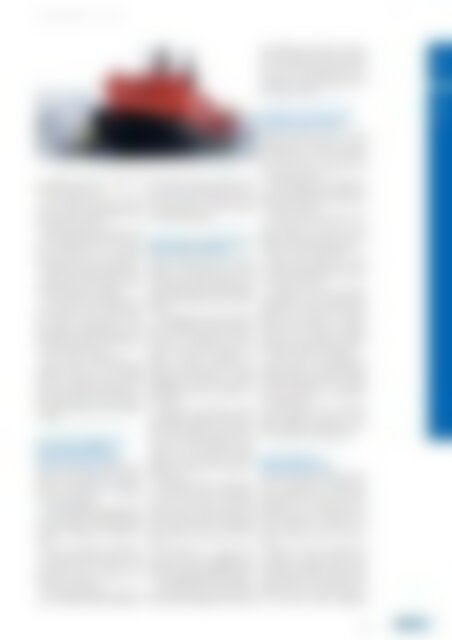 The contract for the port fleet

services is in effect till December 2040

with potential prolongation to two

periods of 5 years each.

The “Atomflot’s Plan of Measures to

Hold the Environmental Year in 2017”

was implemented. The company

operates with no spent nuclear fuel

for further reprocessing at the

the important event for rehabilitation

of the North-West Region.

The positive developments of

Atomflot and the work to conclude

services in large-scale projects in the

Arctic Zone of Russia are expected to

allow Rosatomflot to keep with pace

in all main businesses of the company

(nucnet) Local support for the Hanhikivi-1

Finland has increased by 7.6 % since

last year, according to a telephone

75 % of residents in the Pyhäjoki area

support the plant, which is scheduled

to begin commercial operation in

of residents were in favour of the

is an indication that the impact of

the Hanhikivi-1 project, which is using

local companies have been “strongly

involved” in the project.

contracts by end of year

contracts in December 2018 for the

construction of its first nuclear power

government official involved with the

The kingdom has received requests

from five bidders from China, France,

the US, South Korea and Russia to

and construction work on two

Sabery, a consultant in the business

Abdullah City for Atomic and Renewable

Energy, said in an interview in

development agreement with two to

said. “We are going to have only one

winner that will be building the two

construction to start next year and is

aiming to commission the plants in

Saudi Arabia wants to diversify its

economy and lessen its dependence

on oil sales for most of its official

revenue. As part of these reforms, the

of its energy needs from renewables

such as solar power and from nuclear

Its neighbour the United Arab

Emirates is close to completing the

Korea at the Barakah nuclear station.

In September 2017 a Saudi official

Agency that the kingdom was carrying

out feasibility studies before deciding

how and where to build its first reactors.

would have an independent body to

supervise its nuclear industry by the

nuclear power station had a record

of the Loviisa facility was among the

best in the world for pressurised water

output at Loviisa-1 was the

highest in the station’s history and at

Loviisa-2 was the second highest.

Both units underwent a short

1 was out of production for 21 days

In addition to normal scheduled

motors were renewed. A turbine’s

replaced to increase the power plants’

Fortum sad its investments in

Loviisa in 2017 were approximately

in 2016. Investments in the coming

years will continue to be significant,

Both Fortum units are 502-MW

began commercial operation in May

under construction in Jiangsu province,

northeastern China, has been

synchronised to the grid and has

delivered its first kilowatt-hours of

electrical energy at a power level of

criticality in September 2017, would

now undergo a series of tests at power

100 % power the unit will be operated

for 100 hours before regulators