Take a journey into the living history experience of our

Canal Towns along the C&O Canal towpath. Explore our

region in your car, ride a bike, raft the river or take a leisurely

and learn about our region’s rich history. Pioneer settlement,

It’s 38 miles from Hancock to Cumberland,

MD on interstate highways. But bends along

the river and the C&O Canal Towpath stretch

that mileage to 60. It’s best not rushed anyway,

as this wooded area is filled with natural

beauty and wildlife. Travelers with an interest

in heritage will also want to linger, as the

Cumberland are rich in stories of frontier,

and entertaining adventures will round out

the reasons to spend a few days exploring the

Hancock’s earliest settlers arrived in the 1730s, making it one

of the oldest towns in Western Maryland. The town is named

after Edward Joseph Hancock, Jr., who operated a ferry in the

area and fought alongside George Washington in the American

Hancock’s unique location at a northern bend in the Potomac

River made it a transportation hub, and it was connected by

road to the National Pike in 1818. The C&O Canal arrived

a link to the Baltimore and Ohio (B&O) Railroad.

Towpath, Canal, and town streets lie alongside each other in Hancock.

Hancock’s main action during the Civil War took place in

and his troops suffered one of their first defeats of the war.

the river from Hancock, firing on the town and demanding

surrender. With the help of bad weather, Union Brigadier

General F.W. Lander held the town and prevented an invasion

Today you can visit the Hancock Museum and Visitors

history and the apple orchard industry that followed. Sideling

Hill’s well known geology and wildlife exhibits are here as

well. At Sideling Hill itself you can see evidence of the unique

geologic formations in the area.

with nearby and parallel Main Street, Canal Street, and

and life in historic Bowles House. 10 to 3, Fridays through

frontier defense during the French and Indian War. 8am-sunset,

April through Oct; 10 am-sunset other months. Go to

Visitor Center is closed, but walkways and observation

over 20 miles through Hancock, much of it parallel and adjacent

to the C&O Canal Towpath. Go to www.dnr.maryland.

About 15 miles upstream from Hancock, the Potomac

Paw Bends. In one of these bends lies the town of Paw Paw,

WV, named after the native fruit tree common in the area.

the river here. Later, a ferry operated until the present bridge

was constructed in 1928. During the French and Indian War,

a site that later became Camp Chase during the Civil War.

Today you can visit Camp Hill Cemetery at this site.

The C&O Canal follows several bends in the river, but near the

through a mountain, saving 5 miles of canal construction and

creating one of the engineering wonders of the 19th century. The

tunnel was begun as early as 1836, but not fully completed until

1850. Mules pulled barges through the tunnel until the Canal

closed in 1924. Today hikers and bicyclists on the C&O Towpath

can walk through the long Paw Paw Tunnel; a flashlight will help.

via MD Route 51 and the Paw Paw Bridge. It is a flat ride

situated cemetery served as encampment site in both

the French and Indian and the Civil Wars.

In 1741 a military officer named Thomas Cresap opened a

trading post at the site of an abandoned Shawnee Indian Village

called “Shawanese Old Town.” While there he helped

area, worked with Delaware Chief Nemacolin to open a road

to the Ohio frontier, and aided George Washington during

several trips to the West. Thomas’s son Michael fought in the

Revolution alongside the future President.

The B&O Railroad reached the Potomac shore opposite

Oldtown in 1842, and the C&O opened traffic through

In August 1864 Confederate raiders crossed the Potomac back

into West Virginia here after returning from their destruction

block the Rebels’ withdrawal at Oldtown were routed by CSA

Towpath. You can visit the Irvin Allen/Michael Cresap Museum

bridge to Green Spring, WV (free to pedestrians and bicyclists).

Oldtown is right off the C&O Canal towpath.

In the mid-18th century an Indian village at the confluence

settlement and a trading post. The British Fort Cumberland

was established at this site during the French and Indian War,

and both General Braddock and the 22-year-old Colonel

George Washington used the fort to force French settlers out

The town of Cumberland

on the National Road in

from eastern cities with

and the Ohio River. The

but by the time the Canal reached Cumberland in 1850 the

B&O Railroad had raced ahead, making a canal over the

the western terminus of the C&O, and coal, flour, iron

and limestone all floated downstream from the area mines

During the Civil War thousands of Union troops were

stationed in Cumberland to protect this vital transportation,

were staged against the railroad in the area, the most spectacular

George Crook and Benjamin Kelly. The raiders succeeded in

and gaining the secret

and soon exchanged for

Cumberland into an industrial boomtown following the

Civil War, and it became an important producer of beer,

glass, tires, and textiles. Today, many factories have ceased

operation, and tourism rivals industry as an area employer

At the end (or the beginning!) of your C&O Towpath tour

is Canal Place, where you can learn about C&O history,

take a ride on the Western Maryland Scenic Railroad, and

learn about tourist sites in the area. Cumberland’s vibrant

downtown has shops, cafes, and museums, and historic

Washington’s Headquarters, the only remaining structure

The C&O Canal Towpath ends at the edge of

downtown Cumberland, at the

Visitor Center for both Canal and Cumberland, canal boat

ride through the Alleghany Mountains. Go to www.wmsr.com.

from Cumberland to Pittsburgh, PA. Go to www.gaptrail.org.

of Cumberland and its region. 10-4 Tues.-Saturday,

used by Washington during French and Indian War.

For information on Cumberland’s rich entertainment

and outdoor adventure offerings, go to

Cumberland, “Queen City” along the Potomac 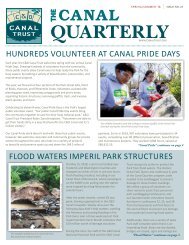 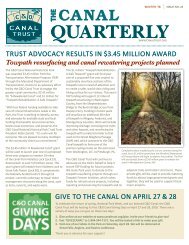 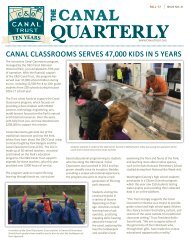 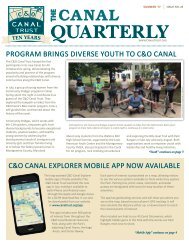