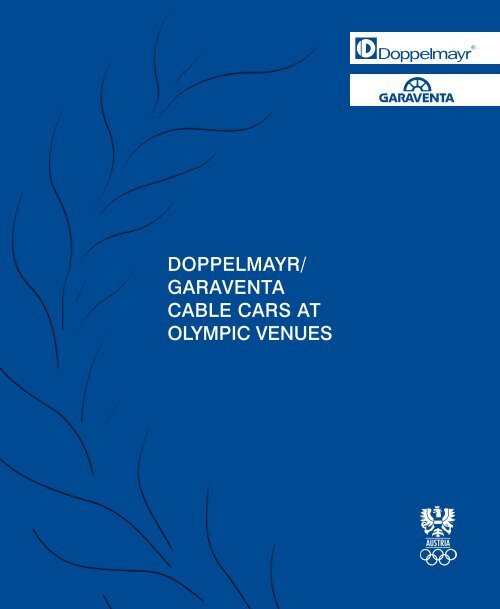 THE RADIANCE OF THE RINGS

The happy images of the Sotchi Winter Olympics are still well remembered.

Of these memories, the ropeways built by Doppelmayr/Garaventa

are an important part: we could not imagine the Russian Olympic

Resort without them, and they played a vital part in the smooth logistics

of the games. We have begun our successful partnership with

Doppelmayr in 2013. Now we have decided to extend it until

Just like the world market leader from Vorarlberg, Austria, the

Austrian Olympic Committee counts on top performances in every

respect. The success of our athletes strengthens the positive

image of our partners and sponsors. We feel fortunate to be able

Doppelmayr. On the other hand, we are able to offer our Austrian

with our sponsors' contributions.

precision is essential. Excellence will once again be on the

itinerary of Austria House, and the Austrian Olympic Committee will

promote excellent performance and products made in Austria.

The Austrian Olympic Committee is grateful and proud of its

Doppelmayr will again play an important role: a total of 22

Doppelmayr ropeways will be operating at the different Olympic

venues. At large scale events such as the Olympic games

Member of the IOC

General Secretary of the ÖOC

ROPEWAYS: A SUSTAINABLE MODE OF TRANSPORT

The corporate philosophy of Doppelmayr/Garaventa and the Olympic

idea have a lot in common: they have at their heart the desire for

excellence. To us at Doppelmayr/Garaventa this means excellence

in technical and economic innovation for a lasting positive impact

And here, too, we find numerous Olympic venues which have placed

Athens, or Atlanta are just a few examples. Already today we

are therefore looking forward to taking on future challenges to

In the past, Doppelmayr/Garaventa has built countless ropeways which

events and have been successfully and effectively used afterwards.

This is in particular true for winter sports events, for example in 2010

at Vancouver/Whistler or in 2014 at Sochi. In Sochi alone Doppelmayr/

Garaventa has built close to 40 ropeway systems up until 2014, and the

development continues. Ski resorts around Sochi are in the process of

expanding their infrastructure, and Doppelmayr/Garaventa has once

more been entrusted with carrying out the various ropeway projects.

Meanwhile in Korea, PyeongChang 2018 is also counting on technology

from Doppelmayr/Garaventa: all ropeways which will play a role in the

2018 Winter Olympics have been built by Doppelmayr/Garaventa.

In recent years, however, ropeways have also been increasingly

used to transport people in cities or for year-round tourism.

This is our passion and our ambition in a nutshell: to build the world's

GARAVENTA IS AT THE

PULSE OF TIME WITH

center as well as views of the ocean. The large stadiums of the Football

In Morro da Providência, the densely arranged dwellings have spread

their way up the 115-meter hillside. The end stations of the detachable

intermediate station at the top - in the heart of the favela. The gondola

transport hub in the city center. Also, the fact that the gondola lift has

a station near the Cidade do Samba (Samba City) is very significant.

preparations for the carnival.

During the “green” Olympic Games in Lillehammer in 1994, the alpine

competitions were held in Kvitfjell and Hafjell. Doppelmayr could realize

numerous installations in those two locations. One of the latest projects

is the Ny Heis Gondola in Hafjell.

throughout the Olympic Games

5,800 operating hours during the

Until 2014, Doppelmayr/Garaventa built 40 ropeway installations in

Sochi - one of which among the longest 3S installations in the world.

It leads from Krasnaya Polyana to the skiing region Laura, where the

and has an overall length of 5,383 meters. Furthermore, by order of

With an hourly capacity of 4,500 passengers per hour and direction

Khutor Finish Zone. In Rosa Khutor, the alpine competitions of the

Olympic Games of Sochi 2014 were held.

In London, Doppelmayr/Garaventa has built the first urban ropeway

in Great Britain. The ropeway is well integrated into the regional and

the Greenwich Peninsula (O2 Arena) with the Royal Victoria Docks

(ExCel Centre). It transports pedestrians and cyclists across the

The 8-seater gondola “Kaiserbahn” in the Kühtai, built by Doppelmayr/

Garaventa installations in the Olympic areas safely and comfortably

transported numerous visitors during the Olympic Games in Innsbruck

As early as 1975, Doppelmayr built a ropeway installation that

was ground-breaking for those times as a connection between the

mainland and Sentosa Island. After 35 years in operation and seeing

a considerable growth of the visitor flow, the Jewel Cable Car Ride

was redesigned and reconstructed completely. Today, up to two million

passengers per year are transported with utmost comfort.

located at the 15th floor of the Harbour Front tower.

In Whistler Mountain, the venue of the alpine competitions of the

was opened in 2008. The “Peak2Peak Gondola” connects Whistler

The ropeway crosses the Fitzsimmons Valley in only 11 minutes and

has an overall length of 4.4 kilometers, a record-breaking rope span

(without towers) of 3,024 meters and a maximum ground clearance

In Turin, Doppelmayr/Garaventa has been granted several tenders

and handed over 8 ropeways, 7 chairlifts and 1 gondola lift to the

“Agenzia Torino 2006”, all ready for operation and finished in due time.

The Funitel Mont Parnes is the biggest ropeway in Greece and

connects a hotel and casino complex with the city centre of Athens.

is in service for 360 days per year for 20 hours every day. The two

VIP cabins are another highlight making the ride a special experience.

The “Olympic Tram” constructed in Snowbasin in 1998 transported

the downhill racers taking part in the competition and the spectators

to the starting point of the ski run. Individual cabins carry the names of

former Olympic champions of the downhill competition and the flags

of their home countries. Once arrived at the top station, a stunning

world and is located in the Atlanta suburb of the same name. On the

occasion of the Summer Olympic Games in Atlanta, Doppelmayr

(VonRoll) replaced a reversible aerial ropeway built in 1962 with a

new, modern and efficient installation. This new ropeway carries the

numerous visitors safely and comfortably along one of the biggest

rock reliefs of the world up to the peak of this natural landmark.

The funicular ropeway Vallvidrera was constructed in 1906 by

VonRoll and redesigned completely in 1998 by Doppelmayr.

The ropeway forms parts of the city train network of Barcelona

and is integrated into the fare system of the Metro Barcelona.

During the Olympic Games in Albertville, the venue for the men‘s

along this renowned downhill slope. It is not only the main feeder line

athletes for whom the Olympic downhill slope is too demanding

safely and with great comfort back to the valley.

In 1967, Garaventa was awarded their first contract in overseas.

At the time, the cabins of the Squaw Valley tram in California were

the biggest worldwide: each cabin offeres space for 125 passengers

(or even 140 according to European standards). The 10-minute-ride

offers a panoramic view of the valley below. Once passengers reach

the mountain top they enjoy various activities - during summer and

The Olympic history is still present in the area.

Enclosed an overview of the 18 installations related to the Olympic Games:

A large number of Doppelmayr/Garaventa ropeways will be in operation

at the 2018 Winter Olympic Games in South Korea. In total, there will

be 22 installations at the four main venues, which are Yongpyong Resort,

host to the slalom and giant slalom competitions, the Bokwang Snow

Park for the freestyle skiing and snowboard events, Alpensia Resort

for ski jumping, biathlon, cross-country and the sliding sports, as

well as the Jeongseon Alpine Center for downhill, super-G and super

combined. The Doppelmayr/Garaventa Group won all the invitations

to tender for the ropeway installations for the PyeongChang 2018

Olympic venues. The Downhill Gondola in Jeongseon is the most

for the first FIS World Cup race in February 2016.

In January 2020 the Youth Olympic Games will be held in Lausanne.

Besides the city of Lausanne, the towns of Diablerets, Leysin and

Villars in the Vaud Alps will be the main venues. The Doppelmayr/

By 2020, 17 installations will be up and running. In Les Diablerets

Garaventa installations will be ready for the young athletes - one

Beijing is already preparing to host the Olympic Games 2022.

working on their masterplans for new infrastructure. This includes

not only slopes, accommodation and sports centers but also new

ropeways. Various Doppelmayr/Garaventa products will be part of the

Games and will transport Olympic athletes and spectators. Genting

Resort Secret Garden has been a partner of Doppelmayr/Garaventa

for many years and will host the freestyle skiing and snowboarding

events during the Winter Olympics 2022. Together the Genting

ropeway installations that are already in operation and bring winter

enthusiasts the highest comfort on their way to the slopes.

technical reliability and innovational force and works in the ropeway sector

as the world market leader in terms of quality and technology. An absolute

make the Group rank number one on the world ropeway market. With

more than 14,800 ropeway systems in 91 countries of the world, Doppelmayr/Garaventa

is not only the only ropeway manufacturer to offer all lift

demands. With production facilities, as well as sales and service locations

in 42 countries worldwide, you can rely on Doppelmayr/Garaventa.

Since the very early days of Doppelmayr/Garaventa, winter tourism

has been the company's core market and is set to remain so. The large

number of successful winter installations built for customers around

expertise. This explains the Group's position as the market's leading

have been built outside of ski regions. The strengths and benefits

of the different ropeway systems from Doppelmayr/Garaventa can

be individually selected for the respective application. As part of

a public transport network, as an attraction at a leisure park or as

a shuttle service to airports and exhibition centers - the possibilities

The central objective of the Doppelmayr Group is fulfilling the current

demands of the passengers and ropeway operators and to offer

forward-looking solutions that are in line with the market. Today, the

precision and trendsetting innovations in ropeway engineering and

Quality and technology leader for more