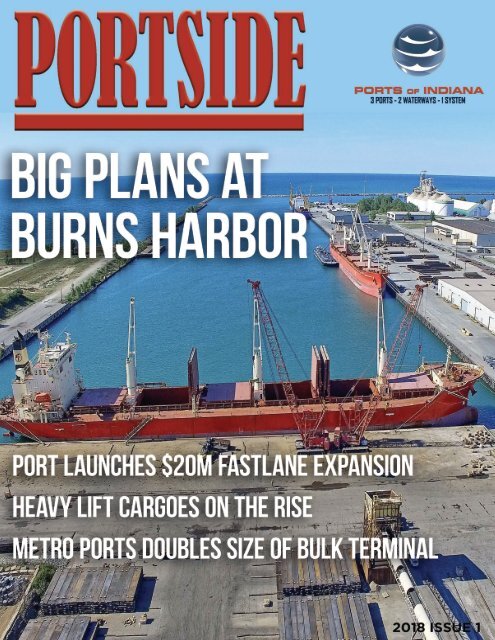 million expansion will take place at the Port of

Indiana-Burns Harbor as part of the U.S. FASTLANE

has awarded the Lake Michigan port one of the

exceed $19.7 million and be developed over the next

few years. Projects will include the construction of:

connections for handling cargo transfers between

• Extensions to a retaining wall and paving of a dock

apron for an additional 1,200 feet of usable dock

“Indiana’s ports are critical hubs for jobs and

economic growth and this expansion will help our state

will not only improve the region’s economic vitality,

but also the international competitiveness of our entire

over the bulk terminal operations at the Port of

the size of the facility. Metro Ports has long been a

major national player in the maritime industry with 27

terminals on the West, East and Gulf Coasts of the

increasing throughput capacity at the port, which

project could have a major impact throughout the

region as Metro Ports brings with it significant

of international connections and state-of-the-art equipment

that allows the facility to significantly increase its

minerals at the port. For

Heavy lift cargo on the rise

saw a major increase in specialized

port’s strategic location in the middle

ocean vessels and river barges, and

services, the port is uniquely qualified

Spain and Brazil as well as the world’s largest liquid

a one-of-a-kind shipment and the most valuable cargo

the port has ever handled. The large device is used by

that are smaller than any other known particle.

ICARUS was shipped in two semitrailer-size containers that

on June 10. It arrived at the Burns Harbor port on July

11, and then was trucked the last 80 miles to its final

destination in the U.S. Department of Energy’s Fermi

26. ICARUS has been tracked by people from around

the last two months of the 4,700-mile trip, the hashtag

cargoes at the Port of Indiana-Burns Harbor, with labor

provided by the International Longshoremen’s Assoc.

and the International Union of Operating Engineers.

Port of Indiana-Mount Vernon plays a key role in

located outside of Evansville ships more cargo than

the state’s other two ports combined, including high

the port are coal, ethanol and soybean oil.

Shipping these cargoes on the inland waterways

and businesses as well as opportunities to reach new

Shipments through the port are the primary

reason the Mount Vernon region ranks as the

“Companies at this port ship cargoes to and from 44

Phil Wilzbacher. “With this kind of reach, it clearly

in the southwestern part of our state have on the

The port handles more coal than any other cargo.

Transfer Terminal at the port from mines in Indiana,

Illinois and Kentucky on trucks and trains that

can dump coal into loading pits in the ground for

transfer to storage areas. At any given time, there

per hour. The coal terminal at the port can transload

up to 8 million tons of coal per year on barges.

The U.S. Energy Department reports that coal is the

for export shipments through the port.

Ethanol was first handled at the port in 2010 and since

then over 2 million tons of ethanol have been shipped

plant sits on 112 acres leased from the Ports of Indiana.

million bushels of corn into 100 million gallons of

ethanol and 320,000 tons of dried distillers grains per

year. U.S. Energy reports that 97% of gasoline in the

U.S. contains some ethanol and the most common

Soybean oil was a major component of the over 1 million

tons of soybean products handled at the port in 2017.

elevator and is a major supplier of soybean oil products

for both food and industrial uses. The processing

capacity of the facility is approximately 100,000

bushels per day. The United Soybean Board reported

that domestic demand for biodiesel accounts for

more than a quarter of the nation’s soybean oil use.

increase from the previous year. According to CGB, one

bushel of soybeans can produce 11 pounds of oil, 44

pounds of meal and three pounds of hulls.

through the port are related to energy production.

Much more than just a port

Port of Indiana-Jeffersonville is a unique maritime

industrial park. With multimodal connections and

strategic advantages to a diverse portfolio of steel,

via the Mississippi-Ohio river system, which connects

barges to ocean vessels in the Gulf of Mexico, allowing

for global connections to South America and Asia, the

feet of riverfront and 29 tenant companies. The port’s

manufacturing facilities and a variety of steel services

including processing, roll forming and galvanizing, as

per year in economic activity and support more than

The port offers world-class infrastructure, including

I rail service, including direct connections with CSX

and the Norfolk Southern Railroad via the Louisville

The opening of the $1 billion Ohio River bridge in

2016 created a new interstate “shortcut” from the

and Nashville. This new “Lewis and Clark” bridge

connects I-265 on both sides of the Ohio River,

completing the much anticipated bi-state connection

Port companies can now reach markets to the south

and east of the port without having to drive the long

way around and through the Louisville metro area.

critical to shippers and the many companies that rely

on the port’s multimodal connections to reach global

From the board room

The Ports of Indiana Commission is a seven-member, bipartisan

meetings that are open to the public. In addition to

calendar is as follows:

• April 19 at Port of Indiana-Mount Vernon

• June 28 at Port of Indiana-Jeffersonville

• August 16 at Port of Indiana-Burns Harbor

with Indiana ties, has been

named port director for the

of the maritime industry,

has returned to Indiana

at the southern Indiana port.

years as a senior-level manager in the port, maritime

transportation, and logistics sectors. As a key member

interim chief executive officer. Prior to his time at the

general manager of container operations at the

as president of a private marine terminal company

specializing in bulk and break-bulk operations.

experience, coupled with his background in strategic

Miles started in late January and takes over the position

from Scott Stewart, who left earlier this year after 6

years at the port to spend more time on community

an honor to have the opportunity to help my home

In addition to his port leadership roles, he has also

for major ocean carriers, including Maersk Line and

U.S. Lines, and worked as a logistics, shipping and

Miles is a native Hoosier raised in the Dearborn County

towns of Lawrenceburg and Greendale. A graduate

Lafayette, Ind., he holds a bachelor’s degree from

the College of Charleston and a master’s from Duke

University’s Fuqua School of Business. He and his

wife, Nancy, have been married for 37 years and have 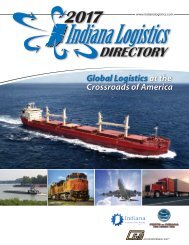 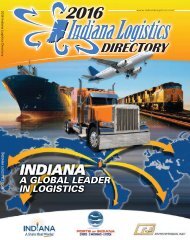