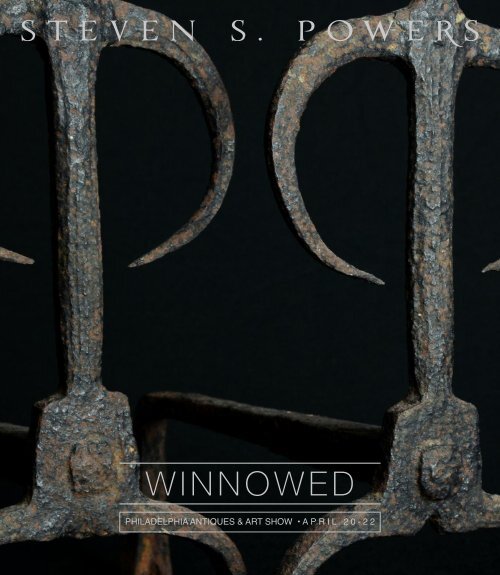 It is not easy coming up with compelling and complex material show after show. This catalog is thinner than usual, but phat as ever—quality over quantity with no filler! Of course, we will be bringing more than these works of art to the fair, but herein are a group of well-winnowed works that deserve special attention. Enjoy! Come see this collection and more at The Philadelphia Antiques & Art Show, April 20-22 (*preview party April 19, 2018). Location: The Navy Yard, 4747 South Broad Street, Philadelphia, PA 19112.

It is not easy coming up with compelling and complex material show after show. This catalog is thinner than usual, but phat as ever—quality over quantity with no filler! Of course, we will be bringing more than these works of art to the fair, but herein are a group of well-winnowed works that deserve special attention. Enjoy!
Come see this collection and more at The Philadelphia Antiques & Art Show, April 20-22 (*preview party April 19, 2018).
Location: The Navy Yard, 4747 South Broad Street, Philadelphia, PA 19112.

It is not easy coming up with compelling and complex

material show after show. This catalog is thinner than

usual, but phat as ever—quality over quantity with no

filler! Of course, we will be bringing more than these

works of art to the fair, but herein are a group of wellwinnowed

Come see this collection and more at The Philadelphia Antiques

An Important Pair of African-American (Slave) Made Andirons

andirons in the form of male and female figures. The figures stand in a coded

stance communicating power. The female figure is slightly smaller and has a

triangular notch clipped between her legs designating her gender.

generational expertise in blacksmithing, as iron working was a centuries-old

and honorable tradition in Africa.

The anthropologist, John Michael Vlach writes in, By The Work of Their

Hands; Studies in Afro-American Folklife, “The [slave] blacksmith was the

pivotal craftsman of his community; all other skills in some manner

depended on his efforts.” To this end, the slave blacksmith had a greater

privilege and standing among other slaves. Slave quarters were barren but

had basic necessities like a small hearth, iron kettles, and simple furniture

(which they often made themselves). Vlach further writes, “slaves

of place...for those slaves with either a personal experience of Africa or the

memory of strong ancestral direction, the slave-made landscape provided the

means to recapture a measure of freedom symbolized by the mother

continent.” It was the small things in their living quarters that they could

make personal, like clothing, tools or music that provided a sense of life in

was excavated in slave quarters in Alexandria, Virginia and is “one of the

rare objects which link American Negro Art to Africa” (Made of Iron, 1966,

p. 107). It has been put forth that the Earnest figure relates to Mande,

wrought bodies, similar to those seen on these andiron figures. And a wood

figure, from the Lega culture and in the Brooklyn Museum displays the same

posture as these figures and has an incised notch between the legs.

These small andirons, placed within a modest hearth provided a platform for

warmth and cooking and in a subtle, but meaningful way served as proud

and poignant reminders of personal identity and cultural heritage.

of arms and legs and notch in pelvis.

Photo of a slave cabin’s hearth.

form of an acrobat with red face

paint, a red and white uniform and

surface is in a remarkable state of

preservation and maintains a

patination—one of the very best I

The Venus of Baltimore

Carved walnut by A. Leibniz

for a walnut carved female figure found in

carving by a very skilled artisan. A young

nude woman stands with her arms above

her head, leaning contrapposto against a

tree stump above an elaborate carved

floral base, which is cornered by dogs and

elephants(?). The animals have black glass

beads and rhinestone inset eyes. It should

be noted that each side of the base is

carved slightly different than the

other—each with a different floral

and base molding motif.

Collection, Beloit, WI, pair of like figures; The American Museum of

These rare Woodlands figures were used by the Mide'wiwin or "Grand

Medicine Society" of the Ojibwa Indians. As part of a

ceremony for attracting a marriage

partner, the figures would be tied face to

face and mixed with “love powder” in a

Excerpted from: THE MIDĒ´WIWIN OR

“GRAND MEDICINE SOCIETY” OF THE

“This love powder is held in high esteem,

and its composition is held a profound

secret, to be transmitted only when a great

fee is paid. It consists of the following

snakeroot and a piece of ginseng cut from

the bifurcation of the root, and

A Pair of near identical figures from the

collection at the Denver Art Museum,

imagery for storytelling—from medicine scrolls, spirit sticks and in many

An old label, attached to the textile, reads, “This is an Indian prayer rug used

weavers) and it is not known if the full textile has any narrative, we may infer

that the figures on the upper left may represent Ms. Gustin and the father of

religious instruction). The stylized headdresses are quite remarkable and I

love the image of the Indian child standing atop the horse.

The Rev. Ellen G. Guston was a

President of the Women’s Board

Gustin was part of a “small but

[and] preached a series of revivals

in Westerly, Rhode Island [and]

caused such a commotion that her

Kronengold was born in New Orleans and

the Pennsylvania Academy of Fine Arts. In the

illustrator for the New Yorker.

an assured handling of paint with broad strokes

and blocks of color that readily define the space

and light of scenes in and around New York City.

Mockorange, (Philadelphus), is a shrub with a citrus scent and has white

blossoms that bloom in the late spring to early summer. A portion of

Jones in her living room/studio.

Ida Jones, the daughter of a former slave, had ten children and at the age

of seventy-two began painting. Self-taught, her work focuses on local

The Chester County Historical Society held a retrospective exhibit in

1995 and Jones was recently included

in “We Speak: Black Artists

Seventy: The Story of Ida Ella

To Everything a Season: The Art

and Life of Ida Jones, by Beverly

Photo of Jones at the easel in her living room. A

portion of this painting is shown in the upper left

held their own on the galle

the map and Thiebaud’s ear

The Newport Zoo had his name all over them

walked into the Allan Stone Gallery and

pastries. At first, the paintings perplexed ceramics featuring a menagerie of

Stone and he thought they just might animals—an be the alligator, birds, a fish, and a

craziest things of earnest he had turtle. ever seen.

But to his amazement, he noticed that they

en this set of cake

r” and the center one is

A fascinating group of seven carved

stones, each in the form of a man’s face

with a pronounced, well-groomed

Though the carver’s identity is unknown,

A Group of Five Figures

much of the details of his life and work remains a mystery. The two

What is known is that he lived outside of Philadelphia, was an architect

and may have had family money. It is also known that he was into

The figures are very well made, with steel armatures or skeletons and

putty. Most have applied paper bikinis and several have wigs of cotton

or wool. Most of the figures come with hand-made boxes, custom fit to

accommodate the size and posture of each.

At first glance the figures appear hermaphroditic or trans-gendered,

however, none have genitals—just muscular bodies with breasts. And

though great effort is put into modeling and composing the figures,

are often quite severe and grotesque.

During the same period in which Forrest Bess was exploring sexuality

through hermaphroditism, Hastings was engaged in exploring the

boundaries of masculinity and femininity.

Pictured and discussed in American

and features—look at those eyelashes!

Gilbert was the owner of the Merchants’

Hotel in Pottstown, PA and was one of

the town’s most popular citizens. In 1904

a newspaper wrote about Gilbert’s trained

pig and noted that it could “count, walk

on two feet and do some clever stunts.”

Gilbert went on to become a PA State

The cane features Gambrinus atop a beer

keg with his right arm making a toast

with a stein. Behind him, a goat and a

dog appear at opposite ends of a barrel.

(r) Folk Art Cane of a Monkey, Snake and Lizard

Very fine and skillfully carved with a monkey

atop a pole with inset mother-of-pearl eyes—

the snake with hundreds of individually carved

To Have and To Hold

A rare pair of African

American tintypes of a

Both figures are quite

strong—and look at that

Though these were found

more/less the same and

the sitters make a nice

Charming portrait of a young

red-headed boy in a dress atop a

I have handled a good number of

have seen thousands more—this is the

first example that I have had of a fully

The face occupies the full round—it is

quite effective. The lacquer is of very good

quality and it probably English or

Continental of the Saundauer type.