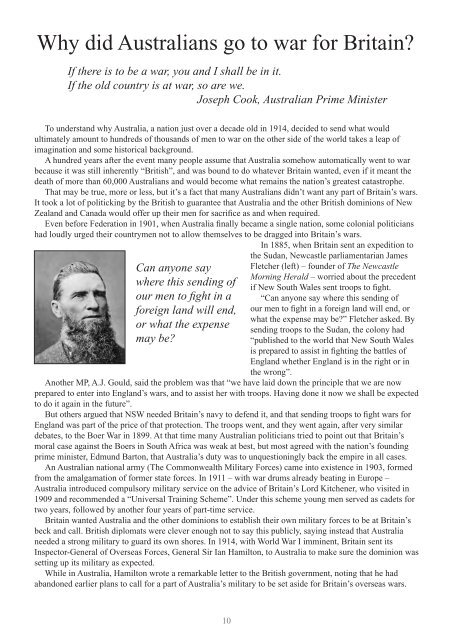 Why did Australians go to war for Britain?

If there is to be a war, you and I shall be in it.

If the old country is at war, so are we.

To understand why Australia, a nation just over a decade old in 1914, decided to send what would

imagination and some historical background.

because it was still inherently “British”, and was bound to do whatever Britain wanted, even if it meant the

death of more than 60,000 Australians and would become what remains the nation’s greatest catastrophe.

That may be true, more or less, but it’s a fact that many Australians didn’t want any part of Britain’s wars.

Zealand and Canada would offer up their men for sacrifice as and when required.

Even before Federation in 1901, when Australia finally became a single nation, some colonial politicians

had loudly urged their countrymen not to allow themselves to be dragged into Britain’s wars.

In 1885, when Britain sent an expedition to

where this sending of

our men to fight in a

or what the expense

Fletcher (left) – founder of The Newcastle

Morning Herald – worried about the precedent

“Can anyone say where this sending of

our men to fight in a foreign land will end, or

what the expense may be?” Fletcher asked. By

sending troops to the Sudan, the colony had

“published to the world that New South Wales

is prepared to assist in fighting the battles of

England whether England is in the right or in

Another MP, A.J. Gould, said the problem was that “we have laid down the principle that we are now

prepared to enter into England’s wars, and to assist her with troops. Having done it now we shall be expected

to do it again in the future”.

But others argued that NSW needed Britain’s navy to defend it, and that sending troops to fight wars for

England was part of the price of that protection. The troops went, and they went again, after very similar

debates, to the Boer War in 1899. At that time many Australian politicians tried to point out that Britain’s

moral case against the Boers in South Africa was weak at best, but most agreed with the nation’s founding

prime minister, Edmund Barton, that Australia’s duty was to unquestioningly back the empire in all cases.

An Australian national army (The Commonwealth Military Forces) came into existence in 1903, formed

from the amalgamation of former state forces. In 1911 – with war drums already beating in Europe –

Australia introduced compulsory military service on the advice of Britain’s Lord Kitchener, who visited in

1909 and recommended a “Universal Training Scheme”. Under this scheme young men served as cadets for

two years, followed by another four years of part-time service.

beck and call. British diplomats were clever enough not to say this publicly, saying instead that Australia

needed a strong military to guard its own shores. In 1914, with World War I imminent, Britain sent its

Inspector-General of Overseas Forces, General Sir Ian Hamilton, to Australia to make sure the dominion was

setting up its military as expected.

While in Australia, Hamilton wrote a remarkable letter to the British government, noting that he had

abandoned earlier plans to call for a part of Australia’s military to be set aside for Britain’s overseas wars.