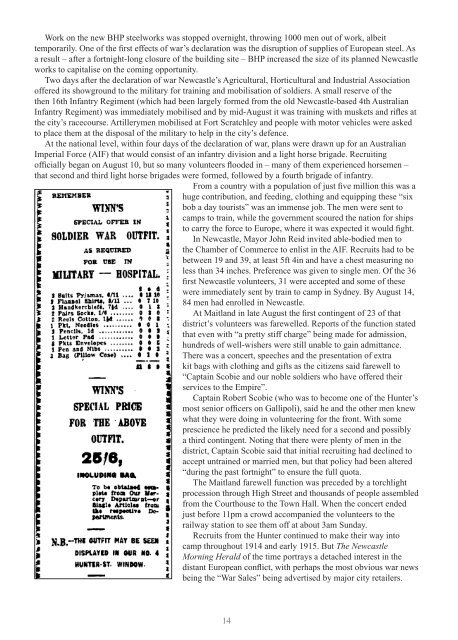 Work on the new BHP steelworks was stopped overnight, throwing 1000 men out of work, albeit

temporarily. One of the first effects of war’s declaration was the disruption of supplies of European steel. As

works to capitalise on the coming opportunity.

Two days after the declaration of war Newcastle’s Agricultural, Horticultural and Industrial Association

offered its showground to the military for training and mobilisation of soldiers. A small reserve of the

the city’s racecourse. Artillerymen mobilised at Fort Scratchley and people with motor vehicles were asked

to place them at the disposal of the military to help in the city’s defence.

At the national level, within four days of the declaration of war, plans were drawn up for an Australian

Imperial Force (AIF) that would consist of an infantry division and a light horse brigade. Recruiting

officially began on August 10, but so many volunteers flooded in – many of them experienced horsemen –

that second and third light horse brigades were formed, followed by a fourth brigade of infantry.

huge contribution, and feeding, clothing and equipping these “six

bob a day tourists” was an immense job. The men were sent to

camps to train, while the government scoured the nation for ships

to carry the force to Europe, where it was expected it would fight.

the Chamber of Commerce to enlist in the AIF. Recruits had to be

less than 34 inches. Preference was given to single men. Of the 36

first Newcastle volunteers, 31 were accepted and some of these

were immediately sent by train to camp in Sydney. By August 14,

84 men had enrolled in Newcastle.

district’s volunteers was farewelled. Reports of the function stated

that even with “a pretty stiff charge” being made for admission,

hundreds of well-wishers were still unable to gain admittance.

There was a concert, speeches and the presentation of extra

“Captain Scobie and our noble soldiers who have offered their

services to the Empire”.

most senior officers on Gallipoli), said he and the other men knew

what they were doing in volunteering for the front. With some

prescience he predicted the likely need for a second and possibly

a third contingent. Noting that there were plenty of men in the

district, Captain Scobie said that initial recruiting had declined to

accept untrained or married men, but that policy had been altered

“during the past fortnight” to ensure the full quota.

The Maitland farewell function was preceded by a torchlight

procession through High Street and thousands of people assembled

from the Courthouse to the Town Hall. When the concert ended

just before 11pm a crowd accompanied the volunteers to the

railway station to see them off at about 3am Sunday.

Recruits from the Hunter continued to make their way into

Morning Herald of the time portrays a detached interest in the

distant European conflict, with perhaps the most obvious war news

being the “War Sales” being advertised by major city retailers.