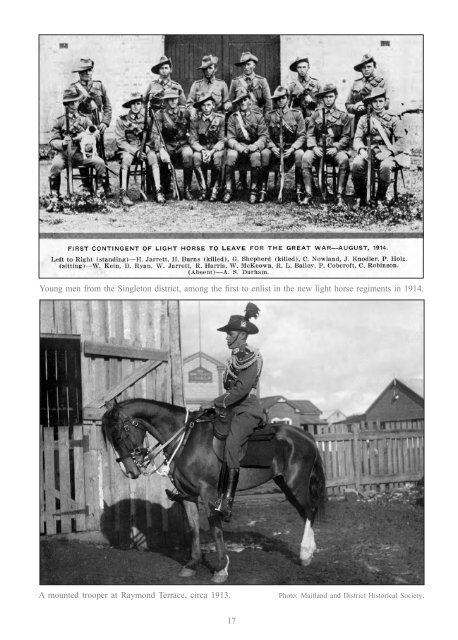 Young men from the Singleton district, among the first to enlist in the new light horse regiments in 1914.

A mounted trooper at Raymond Terrace, circa 1913.

“Trooper Bluegum”: voice from the Hunter It was September 1914 – September and springtime, when the Australian bush decks herself in all her glory. The Hunter Valley, garden of sunny New South Wales, lay like a fairer Garden of Eden between the enveloping hills. The old river ran like a trail of silver laughter past the happy homesteads. Magpies carolled merrily, all the feathered songsters joined in the bushland melody. Golden wattle bloomed in rich profusion from the watershed to the Pacific, and filled the balmy air with the scent of honeydew. On the rich river flats, and in amongst the foot-hills, hares and paddymelons fed unmolested, while higher up the mountain rocks wallabies hopped hither and thither undisturbed by the hunters. Even the foxes and dingoes in their lairs enjoyed a period of peace, for the bush boys were already wending their way to the metropolis to embark on the great adventure. Every little farm, every homestead, every sheep and cattle station sent its quota. Sturdy youths from the town and valleys casually remarked that they would go on a walking tour to Berlin, took train to Sydney, and enlisted in the 1st Infantry Brigade. Station lads mounted their favourite hacks, and with a cheery “So long” took the long trail eastward to the Light Horse camp. And the heroic Australian mothers and sisters choked back their tears and bade them go. “Trooper Bluegum” (Oliver Hogue), from The Cameliers Oliver Hogue, born in Sydney in 1880, had deep roots in the Hunter Valley, with family at Clarence Town. The son of a former NSW Education Minister, Hogue worked as a journalist with The Sydney Morning Herald. When war broke out he applied to become Australia’s official war correspondent but failed in his bid and instead enlisted as a trooper with the 6th Light Horse Regiment, leaving Sydney on the transport ship HMAT Suevic in December 1914. Hogue served on Gallipoli for five months before being evacuated ill to England. He returned to his unit in the Middle East in early 1916 and became well-known and liked as an officer and a writer whose articles usually appeared under the pen-name “Trooper Bluegum”. His contributions to the Sydney Morning Herald were published in book form. After the battle of Romani in August 1916 Hogue was transferred to the Imperial Camel Corps and fought in the battles of Magdhaba, Rafa, and Gaza in 1917. In July 1918 Hogue was transferred to the 14th Light Horse Regiment, was promoted to the rank of major and went through the whole campaign of the Desert Mounted Corps. He died of influenza at the 3rd London General Hospital on March 3, 1919, a victim of the pandemic that swept the world at that time. He was buried in Brookwood cemetery in Surrey. The excerpts from his writing on these pages illustrate his ties to the Hunter Valley. His reference to “dear old Erringhi” relates to Clarence Town. Erringhi was the original name of that settlement, and is believed to be an Aboriginal word meaning “place of wild ducks”. The name was changed in 1832 in honour of England’s Duke of Clarence. Hogue never again saw his “dear old Erringhi”. Then when our spell in the trenches was over, and we sought the seclusion of our dug-outs, there came visions that are not vignettes of war. I saw the old homestead in the Hunter Valley. Hard by Erringhi it stands, where the Williams River meanders through the encircling hills and flows on towards Coalopolis. There are roses ‘neath the old-fashioned windows, and in the fields the scent of lucerne ripe for the scythe. Magpies yodel in the big trees, and the wattle-gold is showing down the river. I wonder will I ever see dear old Erringhi again? From Trooper Bluegum at the Dardanelles 16

Young men from the Singleton district, among the first to enlist in the new light horse regiments in 1914. A mounted trooper at Raymond Terrace, circa 1913. Photo: Maitland and District Historical Society. 17