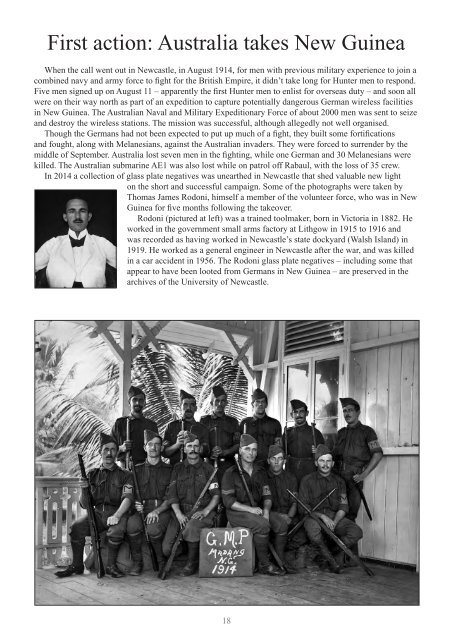 When the call went out in Newcastle, in August 1914, for men with previous military experience to join a

combined navy and army force to fight for the British Empire, it didn’t take long for Hunter men to respond.

in New Guinea. The Australian Naval and Military Expeditionary Force of about 2000 men was sent to seize

and destroy the wireless stations. The mission was successful, although allegedly not well organised.

Though the Germans had not been expected to put up much of a fight, they built some fortifications

and fought, along with Melanesians, against the Australian invaders. They were forced to surrender by the

middle of September. Australia lost seven men in the fighting, while one German and 30 Melanesians were

killed. The Australian submarine AE1 was also lost while on patrol off Rabaul, with the loss of 35 crew.

on the short and successful campaign. Some of the photographs were taken by

Thomas James Rodoni, himself a member of the volunteer force, who was in New

Rodoni (pictured at left) was a trained toolmaker, born in Victoria in 1882. He

1919. He worked as a general engineer in Newcastle after the war, and was killed

in a car accident in 1956. The Rodoni glass plate negatives – including some that

archives of the University of Newcastle.