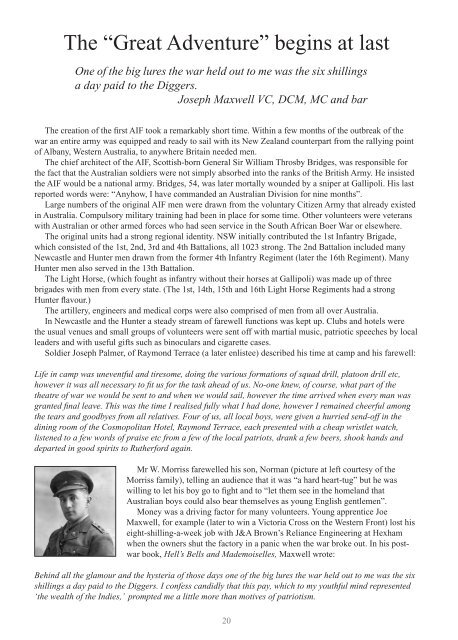 The “Great Adventure” begins at last

a day paid to the Diggers.

The creation of the first AIF took a remarkably short time. Within a few months of the outbreak of the

The chief architect of the AIF, Scottish-born General Sir William Throsby Bridges, was responsible for

the fact that the Australian soldiers were not simply absorbed into the ranks of the British Army. He insisted

the AIF would be a national army. Bridges, 54, was later mortally wounded by a sniper at Gallipoli. His last

reported words were: “Anyhow, I have commanded an Australian Division for nine months”.

in Australia. Compulsory military training had been in place for some time. Other volunteers were veterans

with Australian or other armed forces who had seen service in the South African Boer War or elsewhere.

which consisted of the 1st, 2nd, 3rd and 4th Battalions, all 1023 strong. The 2nd Battalion included many

Newcastle and Hunter men drawn from the former 4th Infantry Regiment (later the 16th Regiment). Many

The Light Horse, (which fought as infantry without their horses at Gallipoli) was made up of three

brigades with men from every state. (The 1st, 14th, 15th and 16th Light Horse Regiments had a strong

The artillery, engineers and medical corps were also comprised of men from all over Australia.

In Newcastle and the Hunter a steady stream of farewell functions was kept up. Clubs and hotels were

the usual venues and small groups of volunteers were sent off with martial music, patriotic speeches by local

leaders and with useful gifts such as binoculars and cigarette cases.

Soldier Joseph Palmer, of Raymond Terrace (a later enlistee) described his time at camp and his farewell:

however it was all necessary to fit us for the task ahead of us. No-one knew, of course, what part of the

theatre of war we would be sent to and when we would sail, however the time arrived when every man was

granted final leave. This was the time I realised fully what I had done, however I remained cheerful among

the tears and goodbyes from all relatives. Four of us, all local boys, were given a hurried send-off in the

dining room of the Cosmopolitan Hotel, Raymond Terrace, each presented with a cheap wristlet watch,

listened to a few words of praise etc from a few of the local patriots, drank a few beers, shook hands and

Mr W. Morriss farewelled his son, Norman (picture at left courtesy of the

Morriss family), telling an audience that it was “a hard heart-tug” but he was

Australian boys could also bear themselves as young English gentlemen”.

Money was a driving factor for many volunteers. Young apprentice Joe

Maxwell, for example (later to win a Victoria Cross on the Western Front) lost his

when the owners shut the factory in a panic when the war broke out. In his postwar

shillings a day paid to the Diggers. I confess candidly that this pay, which to my youthful mind represented

‘the wealth of the Indies,’ prompted me a little more than motives of patriotism.