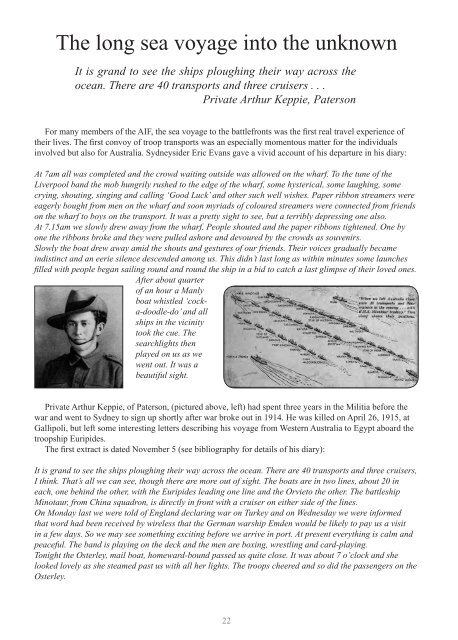 The long sea voyage into the unknown

ocean. There are 40 transports and three cruisers . . .

For many members of the AIF, the sea voyage to the battlefronts was the first real travel experience of

their lives. The first convoy of troop transports was an especially momentous matter for the individuals

involved but also for Australia. Sydneysider Eric Evans gave a vivid account of his departure in his diary:

At 7am all was completed and the crowd waiting outside was allowed on the wharf. To the tune of the

Liverpool band the mob hungrily rushed to the edge of the wharf, some hysterical, some laughing, some

crying, shouting, singing and calling ‘Good Luck’ and other such well wishes. Paper ribbon streamers were

on the wharf to boys on the transport. It was a pretty sight to see, but a terribly depressing one also.

At 7.15am we slowly drew away from the wharf. People shouted and the paper ribbons tightened. One by

one the ribbons broke and they were pulled ashore and devoured by the crowds as souvenirs.

Slowly the boat drew away amid the shouts and gestures of our friends. Their voices gradually became

indistinct and an eerie silence descended among us. This didn’t last long as within minutes some launches

filled with people began sailing round and round the ship in a bid to catch a last glimpse of their loved ones.

of an hour a Manly

ships in the vicinity

took the cue. The

played on us as we

went out. It was a

Private Arthur Keppie, of Paterson, (pictured above, left) had spent three years in the Militia before the

Gallipoli, but left some interesting letters describing his voyage from Western Australia to Egypt aboard the

The first extract is dated November 5 (see bibliography for details of his diary):

It is grand to see the ships ploughing their way across the ocean. There are 40 transports and three cruisers,

I think. That’s all we can see, though there are more out of sight. The boats are in two lines, about 20 in

each, one behind the other, with the Euripides leading one line and the Orvieto the other. The battleship

Minotaur, from China squadron, is directly in front with a cruiser on either side of the lines.

in a few days. So we may see something exciting before we arrive in port. At present everything is calm and

peaceful. The band is playing on the deck and the men are boxing, wrestling and card-playing.

Tonight the Osterley, mail boat, homeward-bound passed us quite close. It was about 7 o’clock and she

looked lovely as she steamed past us with all her lights. The troops cheered and so did the passengers on the