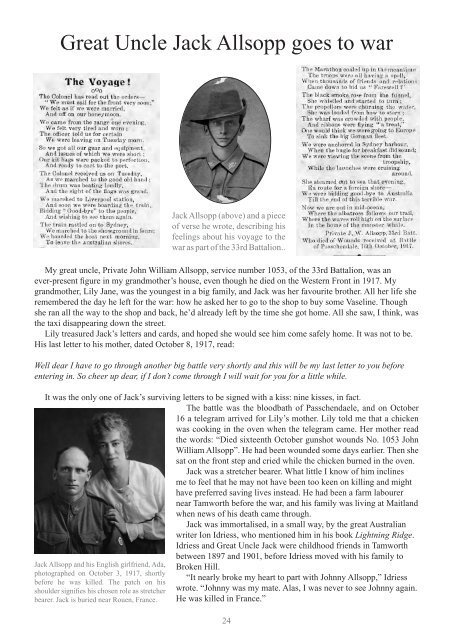 My great uncle, Private John William Allsopp, service number 1053, of the 33rd Battalion, was an

ever-present figure in my grandmother’s house, even though he died on the Western Front in 1917. My

grandmother, Lily Jane, was the youngest in a big family, and Jack was her favourite brother. All her life she

remembered the day he left for the war: how he asked her to go to the shop to buy some Vaseline. Though

she ran all the way to the shop and back, he’d already left by the time she got home. All she saw, I think, was

the taxi disappearing down the street.

Lily treasured Jack’s letters and cards, and hoped she would see him come safely home. It was not to be.

entering in. So cheer up dear, if I don’t come through I will wait for you for a little while.

It was the only one of Jack’s surviving letters to be signed with a kiss: nine kisses, in fact.

The battle was the bloodbath of Passchendaele, and on October

16 a telegram arrived for Lily’s mother. Lily told me that a chicken

was cooking in the oven when the telegram came. Her mother read

William Allsopp”. He had been wounded some days earlier. Then she

sat on the front step and cried while the chicken burned in the oven.

Jack was a stretcher bearer. What little I know of him inclines

have preferred saving lives instead. He had been a farm labourer

near Tamworth before the war, and his family was living at Maitland

when news of his death came through.

Jack was immortalised, in a small way, by the great Australian

writer Ion Idriess, who mentioned him in his book Lightning Ridge.

Idriess and Great Uncle Jack were childhood friends in Tamworth

before he was killed. The patch on his

Jack Allsopp (above) and a piece

of verse he wrote, describing his

feelings about his voyage to the

war as part of the 33rd Battalion..

“It nearly broke my heart to part with Johnny Allsopp,” Idriess

wrote. “Johnny was my mate. Alas, I was never to see Johnny again.

He was killed in France.”