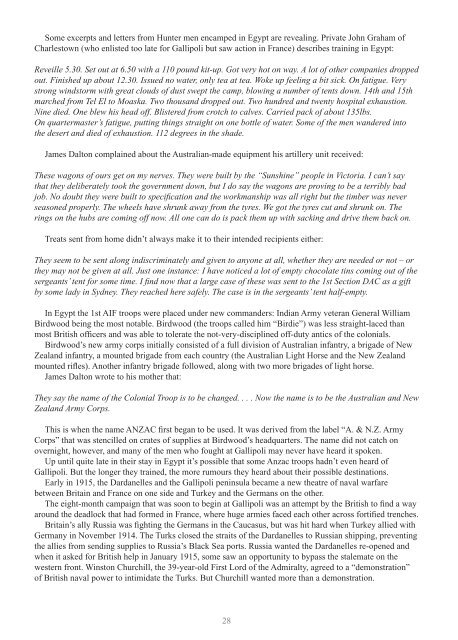 Some excerpts and letters from Hunter men encamped in Egypt are revealing. Private John Graham of

Charlestown (who enlisted too late for Gallipoli but saw action in France) describes training in Egypt:

out. Finished up about 12.30. Issued no water, only tea at tea. Woke up feeling a bit sick. On fatigue. Very

strong windstorm with great clouds of dust swept the camp, blowing a number of tents down. 14th and 15th

Nine died. One blew his head off. Blistered from crotch to calves. Carried pack of about 135lbs.

On quartermaster’s fatigue, putting things straight on one bottle of water. Some of the men wandered into

the desert and died of exhaustion. 112 degrees in the shade.

These wagons of ours get on my nerves. They were built by the “Sunshine” people in Victoria. I can’t say

that they deliberately took the government down, but I do say the wagons are proving to be a terribly bad

job. No doubt they were built to specification and the workmanship was all right but the timber was never

seasoned properly. The wheels have shrunk away from the tyres. We got the tyres cut and shrunk on. The

rings on the hubs are coming off now. All one can do is pack them up with sacking and drive them back on.

Treats sent from home didn’t always make it to their intended recipients either:

They seem to be sent along indiscriminately and given to anyone at all, whether they are needed or not – or

they may not be given at all. Just one instance: I have noticed a lot of empty chocolate tins coming out of the

sergeants’ tent for some time. I find now that a large case of these was sent to the 1st Section DAC as a gift

by some lady in Sydney. They reached here safely. The case is in the sergeants’ tent half-empty.

Birdwood being the most notable. Birdwood (the troops called him “Birdie”) was less straight-laced than

most British officers and was able to tolerate the not-very-disciplined off-duty antics of the colonials.

Zealand infantry, a mounted brigade from each country (the Australian Light Horse and the New Zealand

James Dalton wrote to his mother that:

They say the name of the Colonial Troop is to be changed. . . . Now the name is to be the Australian and New

This is when the name ANZAC first began to be used. It was derived from the label “A. & N.Z. Army

Corps” that was stencilled on crates of supplies at Birdwood’s headquarters. The name did not catch on

overnight, however, and many of the men who fought at Gallipoli may never have heard it spoken.

Gallipoli. But the longer they trained, the more rumours they heard about their possible destinations.

Early in 1915, the Dardanelles and the Gallipoli peninsula became a new theatre of naval warfare

between Britain and France on one side and Turkey and the Germans on the other.

around the deadlock that had formed in France, where huge armies faced each other across fortified trenches.

Britain’s ally Russia was fighting the Germans in the Caucasus, but was hit hard when Turkey allied with

Germany in November 1914. The Turks closed the straits of the Dardanelles to Russian shipping, preventing

the allies from sending supplies to Russia’s Black Sea ports. Russia wanted the Dardanelles re-opened and

when it asked for British help in January 1915, some saw an opportunity to bypass the stalemate on the

western front. Winston Churchill, the 39-year-old First Lord of the Admiralty, agreed to a “demonstration”

of British naval power to intimidate the Turks. But Churchill wanted more than a demonstration.