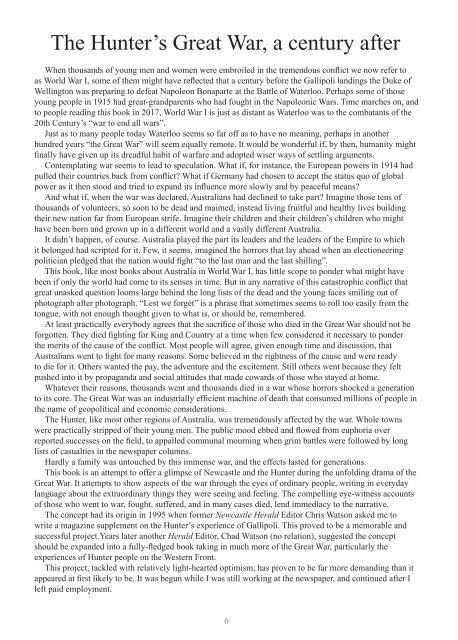 The Hunter’s Great War, a century after

as World War I, some of them might have reflected that a century before the Gallipoli landings the Duke of

Wellington was preparing to defeat Napoleon Bonaparte at the Battle of Waterloo. Perhaps some of those

young people in 1915 had great-grandparents who had fought in the Napoleonic Wars. Time marches on, and

to people reading this book in 2017, World War I is just as distant as Waterloo was to the combatants of the

Just as to many people today Waterloo seems so far off as to have no meaning, perhaps in another

hundred years “the Great War” will seem equally remote. It would be wonderful if, by then, humanity might

finally have given up its dreadful habit of warfare and adopted wiser ways of settling arguments.

Contemplating war seems to lead to speculation. What if, for instance, the European powers in 1914 had

pulled their countries back from conflict? What if Germany had chosen to accept the status quo of global

power as it then stood and tried to expand its influence more slowly and by peaceful means?

And what if, when the war was declared, Australians had declined to take part? Imagine those tens of

thousands of volunteers, so soon to be dead and maimed, instead living fruitful and healthy lives building

have been born and grown up in a different world and a vastly different Australia.

It didn’t happen, of course. Australia played the part its leaders and the leaders of the Empire to which

it belonged had scripted for it. Few, it seems, imagined the horrors that lay ahead when an electioneering

politician pledged that the nation would fight “to the last man and the last shilling”.

This book, like most books about Australia in World War I, has little scope to ponder what might have

been if only the world had come to its senses in time. But in any narrative of this catastrophic conflict that

photograph after photograph. “Lest we forget” is a phrase that sometimes seems to roll too easily from the

tongue, with not enough thought given to what is, or should be, remembered.

forgotten. They died fighting for King and Country at a time when few considered it necessary to ponder

the merits of the cause of the conflict. Most people will agree, given enough time and discussion, that

Australians went to fight for many reasons. Some believed in the rightness of the cause and were ready

to die for it. Others wanted the pay, the adventure and the excitement. Still others went because they felt

pushed into it by propaganda and social attitudes that made cowards of those who stayed at home.

Whatever their reasons, thousands went and thousands died in a war whose horrors shocked a generation

to its core. The Great War was an industrially efficient machine of death that consumed millions of people in

the name of geopolitical and economic considerations.

The Hunter, like most other regions of Australia, was tremendously affected by the war. Whole towns

were practically stripped of their young men. The public mood ebbed and flowed from euphoria over

reported successes on the field, to appalled communal mourning when grim battles were followed by long

lists of casualties in the newspaper columns.

Hardly a family was untouched by this immense war, and the effects lasted for generations.

Great War. It attempts to show aspects of the war through the eyes of ordinary people, writing in everyday

language about the extraordinary things they were seeing and feeling. The compelling eye-witness accounts

of those who went to war, fought, suffered, and in many cases died, lend immediacy to the narrative.

write a magazine supplement on the Hunter’s experience of Gallipoli. This proved to be a memorable and

should be expanded into a fully-fledged book taking in much more of the Great War, particularly the

experiences of Hunter people on the Western Front.

This project, tackled with relatively light-hearted optimism, has proven to be far more demanding than it

appeared at first likely to be. It was begun while I was still working at the newspaper, and continued after I