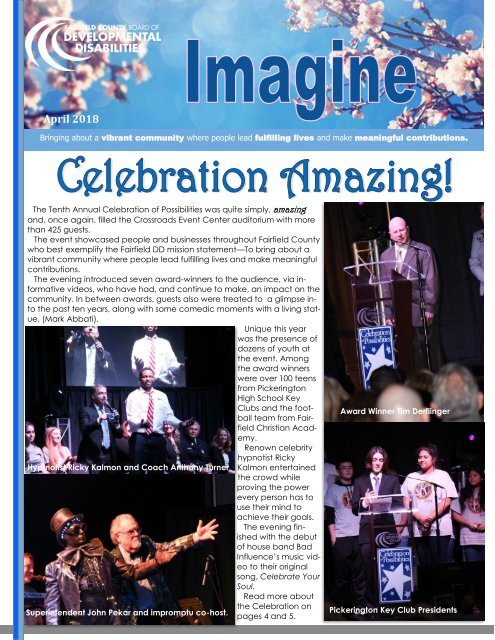 The Tenth Annual Celebration of Possibilities was quite simply, amazing

and, once again, filled the Crossroads Event Center auditorium with more

The event showcased people and businesses throughout Fairfield County

The evening introduced seven award-winners to the audience, via informative

videos, who have had, and continue to make, an impact on the

community. In between awards, guests also were treated to a glimpse into

the past ten years, along with some comedic moments with a living statue,

was the presence of

dozens of youth at

Clubs and the football

every person has to

use their mind to

for 8 seasons. And Game of Thrones has

only 7 seasons under its belt with one

It’s fairly humbling then to know that

we just enjoyed our 10th Annual Celebration of Possibilities

and the excitement and inspiration present at the first

event was just as apparent this year.

Each year about this time we reflect on the Celebration

and think, “How in the world will we ever top that?” It’s a

daunting question but somehow, every year, we manage

to recreate the atmosphere of this special night in a whole

Of course, having the honor of recognizing the many

accomplishments of the unique people and businesses in

the community guarantees some degree of success.

For me, the highlight of this year was the fact that so

many young people throughout the community were involved

with the event, from the high school award recipients

you will read about on page 4, to the teenage volunteers

who helped out in the kitchen. Nothing solidifies the

goodness of the world around them.

I also was very moved by the unsolicited comments

made in the award videos by some of the folks Fairfield

DD supports. To hear a man describe, in his own words,

how much he values the employment opportunities made

and Steak ‘n Shake reiterates the importance of personcentered

planning. And recognizing Tim Derflinger for the

enormous value he is adding to our community through

his volunteering renews my faith in just about everything.

I’d be remised if I didn’t, again, thank the many, many

volunteers who create this event from the ground up. It

simply would not be possible to pull this off without each

As we bask in the afterglow of another successful Celebration,

I hope you will take a moment to savor the longevity

and the success of this unusual event. And I certainly

hope we will see you again next year.

year in a row

including staff and board members, as well as

many people supported by Fairfield DD and their

couldn’t wait to get

back to his Steak ‘n

award with his interns

of them were featured

in his award video.

in March to talk to their peers about the importance of disabling labels. As part

passed out over 2400 lapel buttons discouraging the use of the “r-word,” and

Students set up an

during all lunch periods and also made sure every

member of the school staff had a button to wear as

“This is an important first step in recognizing that no

one wants to be labeled, “ said Lancaster High School

well to messages when they are delivered by their

The buttons were so successful that Community Relations

anticipates a re-order and will definitely expand

this outreach next year.

According to a publication on peer

pressure by Parent Further, only 10

that they had not been influenced

by peer pressure. If this holds true,

positive peer pressure has the power

to influence nearly every teen it

touches for the better!

Football Team— The team has developed

friendships with the students at Forest

outings to the county fair.

of Fairfield DD and Job Fusion, their

president also is a past Fairfield Industries

board member and a community

at Fairfield DD, Michelle is an exceptional

time to volunteer for the central Ohio

Service Center, Gloria had a

long career making a difference in

the lives of local children.

Tim brings about a vibrant

two locations and a long

career at a local restaurant.

every month to run a

playgroup for children on

in a transition program

… and it seriously ROCKS

The 10th Celebration of Possibilities

ended on a very cool note

with the premiere of a music video

by our house band, Bad Influence.

Competti, who also serves on the

Fairfield DD Board of Directors,

wrote the song Celebrate My

Soul. The band performed it that

evening and since that time, the

song has been widely received by

people all over the country. The

and release an entire album under

the guise of a new musical

group, Breaking In, —a spinoff

from his work with his local band

Bad Influence. Several of the

new, original songs on the album

will be performed by these same

Celebrate My Soul is the first

song to be released from the album

and all major music outlets.

The video features children and

as well as some other very special

people who have been touched

by the song. The people highlighted

include students at Forest Rose

School, members of the Fiber Arts

Group and employees at Art &

House. The song is performed by

members of Bad Influence and

Congratulations to Bob and the

band. We are excited to see what

the future holds! For more information,

The annual Mark Everly Classic bowling season, a league for adults with developmental disabilities, will begin

Wednesday May 2 at Tiki Lanes in Lancaster. Bowlers should be ready for warm-ups by 6:10 pm each Wednesday

and the season will end on July 25.

Thanks to generous donations, the cost is free but the league is limited to 90 bowlers. Bowlers are responsible for

their own transportation and each evening will consist of two bowl games ending at 8:15 pm.

Month wrapped up with the gallery event Meet

Me @ the Studio, a collaborative show featuring

Works by seven artists were unveiled and will remain

on display in the gallery at 150 W. Main

The work pictured (right) is a self-portrait by artist

The Ohio State University will present Techsummit 9 am to 4 pm June 15 at the Renaissance Hotel in Westerville. Registration

is now open at https://nisonger.osu.edu/techsummit.

Technology has influenced the lives of nearly everyone in one manner or another. Most of us take it for granted, perhaps

advancement or have just been made significantly easier. In an age where every year technology takes a more

The 2018 TechSummit is a one day event that presents an opportunity for self-advocates, professionals, and family

for people with developmental disabilities. The event features speakers from across the United States. These

include experts in their field, self-advocates and family members who can share their personal testimony about the

way that technology has influence their lives.

To bring about a vibrant community

where people lead fulfilling lives and

Life should not only be lived;

it should be celebrated.

April <strong>2018</strong> Bringing about a vibrant community where people lead fulfilling lives and make meaningful contributions. The Tenth Annual Celebration of Possibilities was quite simply, amazing and, once again, filled the Crossroads Event Center auditorium with more than 425 guests. The event showcased people and businesses throughout Fairfield County who best exemplify the Fairfield DD mission statement—To bring about a vibrant community where people lead fulfilling lives and make meaningful contributions. The evening introduced seven award-winners to the audience, via informative videos, who have had, and continue to make, an impact on the community. In between awards, guests also were treated to a glimpse into the past ten years, along with some comedic moments with a living statue, (Mark Abbati). Unique this year was the presence of dozens of youth at the event. Among the award winners were over 100 teens from Pickerington High School Key Clubs and the football team from Fairfield Christian Academy. Pam Whiteley Renown celebrity hypnotist Ricky Vickie Rzanski Hyptnotist Ricky Kalmon and Coach Anthony Turner Kalmon entertained the crowd while proving the power every person has to use their mind to achieve their goals. The evening finished with the debut of house band Bad Influence’s music video to their original song, Celebrate Your Soul. Read more about the Celebration on Superintendent John Pekar and impromptu co-host. pages 4 and 5. Award Winner Tim Derflinger Pickerington Key Club Presidents