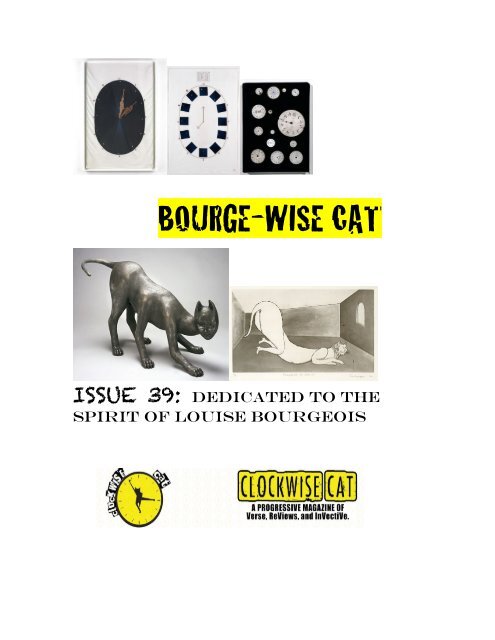 ISSUE 39: Dedicated to the

Those artworks speak to me for obvious reasons, but also, her surname just happens to

echo a theme that Clockwise Cat so vociferously rebels against - the bourgeoisie.

Interestingly enough, over time the word bourgeois has come to signify something rather

different than what it used to indicate. It used to refer to the middle class, but has

Clockwise Cat, of course, is a champion not just of the middle class, but of the poor and

indigent. We rail rowdily against the wretched economic oppressors that would stratify

society into a class crass system, leaving some so destitute they must slumber in the

sewage-strewn streets, stewing in their own urine and feces.

The editor may partake in bourgeois activities from time to time - gourmet dining,

anyone? - but we find this modern-day tilt toward luxury everything (from condos to

dental spas - I mean, what in the FUCK is that?) abhorrent in the face of so much misery.

from sculpture and painting to printmaking, and whose themes emanated a feisty feminist

flavor. But we also dedicate it to those, who, like antifa, fight against the forces of

fascism that, like giant arachnids, terrorize us all, culturally, mentally, and financially

Olson writes poetry and prose. Her work has been featured in

Failed Haiku: A Journal of English Senryu, haikuniverse, and The

Artist bio: David writes: “My name is David Rodríguez. I am 39 years

old and I am from Spain. From an early age, I have always been

attracted to the art world, but my love for photography didn´t start until

2013, the year I bought my first reflex camera, and I began to explore

my attraction to art. Shortly afterwards, I began to train myself

through several courses, and also in a self-taught way.”

Artist bio: AK is a personal friend of Pasquino and Marforio,

although he's never been invited to Rome. He is also attracted to the

combustible quality of the scrawled image sitting next to certain

An Oral History of Game Show

A new competitive cooking show funded by the government and a

Nonetheless this one also devastated the economy and the whole culture

went into freefall thereafter. Not just consumer spending, but whole

glamour when they first started. I thought that was a mistake. If

you’re going to do this kind of show at all, don’t be coy. Can’t play

virgin while punching time clocks in a brothel. Be upfront, upfront

When these shows started, they all had so much do-goodery it

turned the stomach. All this talk of nutrition and technique-

Coloradans’ firm flesh had a velvety flavor full of vitamins while

Minnesotans had to be filleted just so-but all anyone thinks is: get to

it. And the hosts! No makeup up on these women with plain hairstyles,

All this feel-good jabber, but no one was talking about the real

problem: depopulation. We were running out of defensible and delicious

cannibalism were gathering momentum at the ballot box while pro bono

litigators fought to outlaw the practice. Bless their pointed little

If the government would’ve put me on retainer from the start, we

could’ve rolled back the Pro-People Movement in weeks. Instead, it

took a year. But what a year! First we had to fire those awful public

access style hosts! Then we’d feed the people so much glamour they’d

What times they were...

came to hire me. After we discussed the job and negotiated a fee, he

I remember that I leaned back and allowed myself a smile. Things

were about to change. Rightly or wrongly, an era was about to begin

and I would be in the thick of it. If and when the pendulum swung the

other way, my reputation would suffer. And it did. I accept my fall.

But don’t ever say I didn’t have progressive ideas.

published in Amoskeag Journal, The Bitter Oleander, Foliate Oak. He

smells like fennel, sleeps on a mattress stuffed with cilantro, and

White America has a history of freaking out at perfectly

reasonable suggestions by the black community.

Hey, maybe black lives should matter as much as white ones.

Hey, maybe we shouldn’t be making money off of children’s

privatization lobbying firms across the country after a new report by

the National Association for the Advancement of Colored People (NAACP)

Some news sources are characterizing the report as “radical” or

However, the report, titled “Quality Education for All: One

School at a Time,” basically says nothing more revolutionary than that

all public schools should be transparent and accountable. That includes

“Public schools must be public,” the report states. “They must

serve all children equitably and well. To the extent that they are part

of our public education system, charter schools must be designed to

And why shouldn’t they?

More than 3 million students attend charter schools across the

country. Approximately 837,000 of them are black. Don’t they deserve

the same kinds of democratically controlled schools and fiscal

responsibility as their counterparts in traditional public schools?

Somehow your local public school is able to teach kids while

still keeping a record of how it’s spending its money – your money. And

if you don’t like what’s being done, you can go to a school board

meeting and speak up or even run for a leadership position.

How does getting rid of that help kids learn? How does operating

in secret in the shadows benefit children?

The report also recommends that local communities should have

more control over whether to open charter schools in their districts

and calls for an end to for-profit charter schools, altogether.

Not exactly the musings of anarchist provocateurs.

call their movement School Choice. Shouldn’t communities get to choose

whether they want them there in the first place? If the program is

based on the free market, let them make their case to the community

before setting up shop. They shouldn’t get to make a backroom deal with

your congressman and then start peddling their wares wherever they

Moreover, if charter schools are, indeed, public schools, why

should they be allowed to operate at a profit? They are supported by

tax dollars. That money should go to educating children, not lining the

The authors were very specific on this point:

“No federal, state, or local taxpayer dollars should be used to

fund for-profit charter schools, nor should public funding be sent from

But that’s not all.

The author’s also call out charters infamous enrollment and

hiring practices. Specifically, these kinds of privatized schools are

known to cherry pick the best and brightest students during admissions,

disabilities before standardized testing season. The report called for

In addition, the report suggests charters no longer try to save

money by hiring uncertified teachers. If charters are going to accept

public money, they should provide the same kind of qualified educators

as their traditional public school counterparts.

However, even if such reforms are made, the report is doubtful

that privatized education could ever be as effective and equitable as

traditional public schools. In perhaps the most damning statement:

“While high-quality, accountable, and accessible charters can

contribute to educational opportunity, by themselves, even the best

charters are not a substitute for more stable, adequate and equitable

Quality Education after a set of intensive hearings or “listening

sessions” across the country in cities such as New Haven, Memphis,

product is the result of the input they received during these meetings.

This is only the latest in a growing movement of skepticism

toward privatized education of all sorts – especially in relation to

its impact on students of color.

Less than a year ago, the NAACP, the oldest civil rights

organization in the country, called for a moratorium on any new charter

schools. This week’s report takes that caution to the next level.

Despite a truly controversial record, over the past decade, the

number of students in charter schools has nearly tripled. In terms of

pure numbers, black students only make up more than a quarter of

enrollment. To put it another way, one in eight black students in the

The NAACP isn’t the only civil rights organization critical of

charter schools. Groups such as the Journey for Justice Alliance, a

and the Movement for Black Lives, a conglomeration of the nation’s

However, this week’s report wasn’t focused solely on

privatization. It also addressed the central issue at traditional

The report identifies severe inequalities between rich vs. poor

communities as the cause of so-called failing schools. The report

root of many of the issues, school finance reform is essential to

ensure that resources are allocated according to student needs.”

schools, not punitive measures. There should be more

federal, state, and local policies to attract and retain fully

The report suggests states model their funding formulas on those

of Massachusetts and California and that the federal government should

fully enforce the funding-equity provisions in the Every Student

It would be difficult to find more rational and reasonable

solutions to the education problems in today’s schools.

But pay attention to the response it’s getting.

Corporate reformers are running scared with their hair on fire as

Editor’s Note: This article first appeared at the blog, Gadfly on

the Wall, and is used with the author’s permission. Be sure to check

out Steven Singer’s book, Gadfly on the Wall: A Public School Teacher

Speaks Out on Racism and Reform