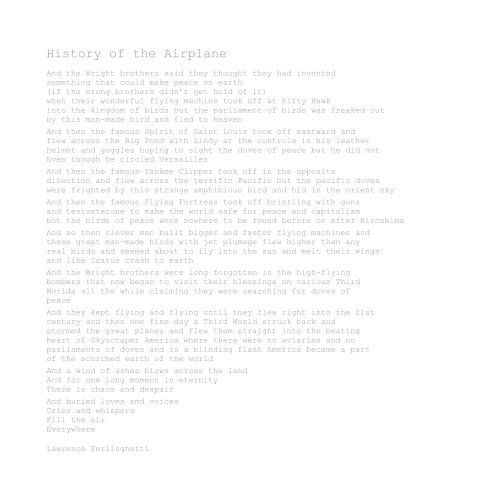 History of the Airplane

And the Wright brothers said they thought they had invented

something that could make peace on earth

(if the wrong brothers didn’t get hold of it)

when their wonderful flying machine took off at Kitty Hawk

by this man-made bird and fled to heaven

Even though he circled Versailles

And then the famous Yankee Clipper took off in the opposite

direction and flew across the terrific Pacific but the pacific doves

And then the famous Flying Fortress took off bristling with guns

and testosterone to make the world safe for peace and capitalism

And the Wright brothers were long forgotten in the high-flying

bombers that now began to visit their blessings on various Third

Worlds all the while claiming they were searching for doves of

stormed the great planes and flew them straight into the beating

heart of Skyscraper America where there were no aviaries and no

of the scorched earth of the world

And a wind of ashes blows across the land

And for one long moment in eternity

There is chaos and despair

And buried loves and voices

included writers such as Kenneth Rexroth, Gary Snyder, Allen Ginsberg, and Jack Kerouac. Ferlinghetti is the author of more than thirty books of poetry, including Time of Useful Consciousness (New Directions, 2012); Poetry as Insurgent Art (New Directions, 2007); Americus, Book I (New Directions, 2004); A Far Rockaway of the Heart (New Directions, 1997); and A Coney Island of the Mind (New Directions, 1958). He has translated the work of a number of poets including Nicanor Parra, Jacques Prevert, and Pier Paolo Pasolini. Ferlinghetti is also the author of more than eight plays and of the novels Love in the Days of Rage (Overlook, 1988) and Her (New Directions, 1966). Lawrence Ferlinghetti On March 24, 1919, Lawrence Ferlinghetti was born in Yonkers, New York. After spending his early childhood in France, he received his BA from the University of North Carolina, an MA from Columbia University, and a PhD from the Sorbonne. During World War II he served in the US Naval Reserve and was sent to Nagasaki shortly after it was bombed. He married in 1951 and has one daughter and one son. In 1953, Ferlinghetti and Peter Martin began to publish City Lights magazine. They also opened the City Lights Books Shop in San Francisco to help support the magazine. In 1955, they launched City Light Publishing, a bookpublishing venture. City Lights became known as the heart of the “Beat” movement, which In 1994, San Francisco renamed a street in his honor. He was also named the first poet laureate of San Francisco in 1998. His other awards and honors include the lifetime achievement award from the National Book Critics Circle in 2000, the Frost Medal in 2003, and the Literarian Award in 2005, presented for “outstanding service to the American literary community.” Currently, Ferlinghetti writes a weekly column for the San Francisco Chronicle. He also continues to operate the City Lights bookstore, and he travels frequently to participate in literary conferences and poetry readings. www.citylights.com/ferlinghetti Image Credit: Christopher Felver Ferlinghetti with Hat | 1981 | Gelatin silver print Courtesy of George Krevsky