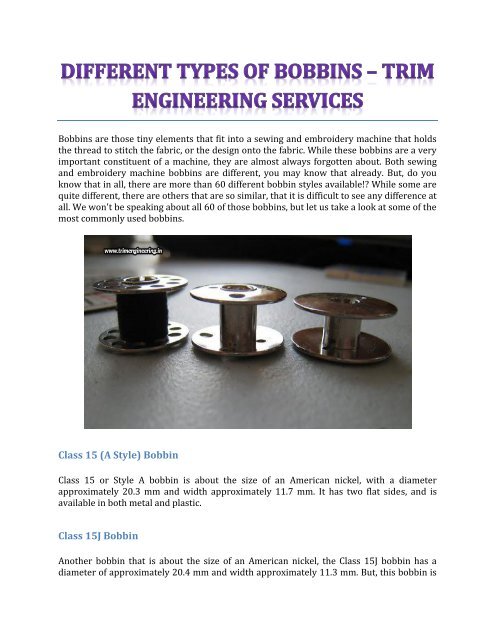 Although bobbins are very tiny elements and go unnoticed, they are very important constituents of a machine, and are available in more than 60 types! Here are the most commonly used bobbins in shape, structure, and material.

Although bobbins are very tiny elements and go unnoticed, they are very important constituents of a machine, and are available in more than 60 types! Here are the most commonly used bobbins in shape, structure, and material.

the thread to stitch the fabric, or the design onto the fabric. While these bobbins are a very

important constituent of a machine, they are almost always forgotten about. Both sewing

and embroidery machine bobbins are different, you may know that already. But, do you

know that in all, there are more than 60 different bobbin styles available!? While some are

quite different, there are others that are so similar, that it is difficult to see any difference at

all. We won't be speaking about all 60 of those bobbins, but let us take a look at some of the

Class 15 or Style A bobbin is about the size of an American nickel, with a diameter

available in both metal and plastic.

Another bobbin that is about the size of an American nickel, the Class 15J bobbin has a

available only in plastic. While it looks similar to a Class 15 bobbin, it has a slight curve to

its sides. This curve is barely visible, but it can significantly affect the performance of the

Class 66 bobbin is yet another bobbin that is about the size of an American nickel. It has a

in both metal and plastic. It has a significant curve on the sides, and appears to be same as

the Class 15 bobbin; however, it cannot replace the bobbin in any machine.

Style L bobbin is the size of an American nickel, measuring approximately 20.3 mm in

diameter and approximately 8.9 mm in width. It has two flat sides, and is available in

Style M bobbins are about the size of an American quarter, with a diameter of

available in metal and Magna-glide core.

structure and size, let us look at some others that are classified based on the material they

are made of. While there is a list of materials that bobbins can be made of, the most

common ones include metal, aluminum, and plastic.

Metal bobbins – These are the most common bobbins used, made of treated steel. These are

inexpensive, and they generally perform just as well as metal bobbins.

One other important thing to note here is that bobbins are often confused with pirn. But,

both bobbins and pirns differ a great deal. Pirns are rods that taper at the sides, and are not

wound evenly from end to end like bobbins. Thus, while they perform similar in fashion to

bobbins, they are actually quite different. But, whatever your requirement, you can get

them all at Trim Engineering Services, the leading bobbin and pirn manufacturers in 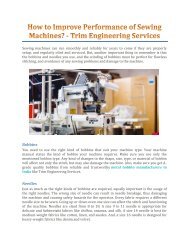 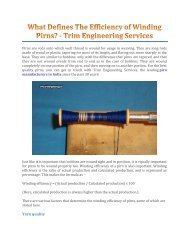 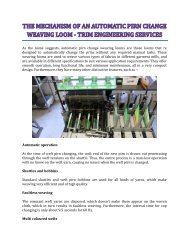 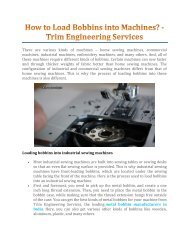 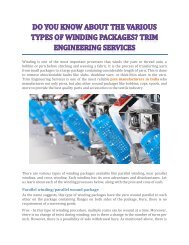 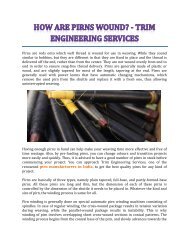 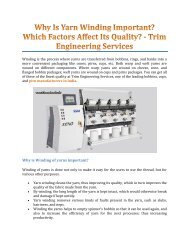 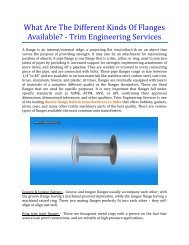 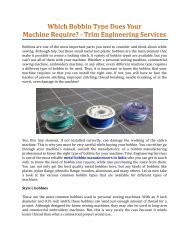 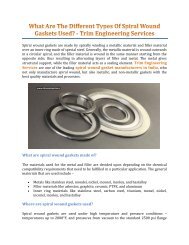 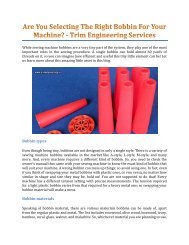