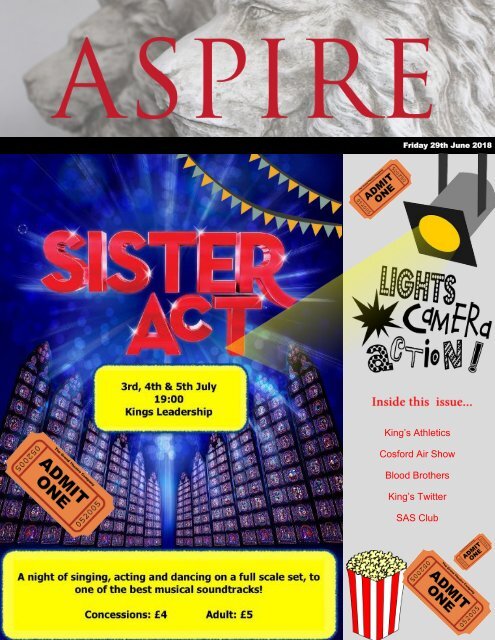 “The day was a great opportunity for me to attend! Overall it was awesome seeing

“Such an inspirational day seeing the fast jets soaring through the sky! It was

As you hopefully already know, the English department are running a trip to

again and again (it will be my 4th time watching it on stage!) Also, this is one of

will really help you when it comes to answering exam questions. You will have a

Some of you have mentioned about the price being expensive. We have already

Manchester tickets are approximately £40-£50. However, if you do want to join us

and money is an issue, please do come and see me as I'm sure there will be

something we can do to help financially.

Your space will only be guaranteed when you have paid.

Any questions, please come and speak to Miss Moss.

King’s students have been

games and prizes in

preparation for the big

charity event we are holding

to come along from 2pm to

The SAS Has Been Busy!

science lessons! It's a lot of fun and allows those who come to be creative and

produce better results for what we are doing. SAS has been enjoying a whole

range of experiments in the last few weeks that we would like to tell you about:

inside a beaker based on their densities - and, if done correctly, the layers do

not mix at all. We then dropped various solid objects into the tower to see at

which level they stopped falling - again, based on their densities!

series of chemicals to produce a rainbow of colours based on pH. We then

Choice chambers - we acted like environmental scientists wanting to find out

different environments for woodlice to live in. We then collected woodlice from

outside and watched which environment they went to, showing us the conditions

they prefer to live in.

favourite of the science club!). Adding cornflour at this point however makes

slime. It's all about the crosslinks made between the polymers!

collect as many different species as we could using nets, trays and

worked out what we had and then researched what these species eat, what

eats them and where they like to live outside.

way! This was followed by a hands-on experiment where pupils made a non-Newtonian

fluid - in other words, something that is a liquid until you apply force to it and then it becomes a

solid (or vice versa in the case of things like tomato sauce!) In this instance, pupils mixed

cornflour with water and the resulting mixture is called oobleck. Pupils also place skittles in

mixed together. Every pupil was given a certificate to commemorate their visit and we look

forward to seeing many of them joining King's in the next few years!

and have a visit at any point in the year. We provide three different age appropriate sessions

for primary kids based on the topics of 'Challenging Changes,' 'Super Sounds' and 'Lively

Lights.' We can also provide other sessions to fit in with specific topics you may be covering if

demonstrations that may not be possible outside of a secondary school setting.

We hope to see you here at King's in the future!

and are first reserves for the Cheshire team in the next regional competition.