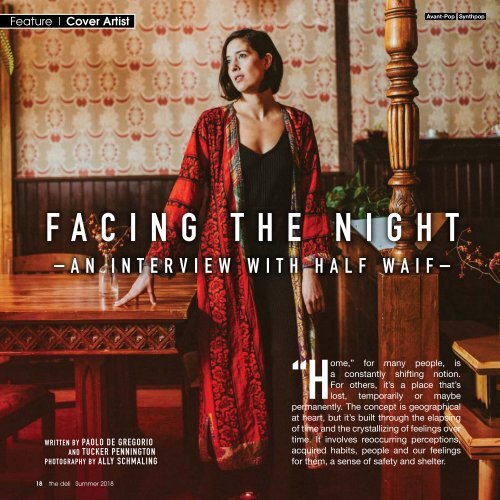 – an Interview with Half Waif–

for many people, is

For others, it’s a place that’s

permanently. The concept is geographical

at heart, but it’s built through the elapsing

of time and the crystallizing of feelings over

acquired habits, people and our feelings

for them, a sense of safety and shelter.

Feature | Cover Artist Avant-Pop Synthpop Facing the Night – an Interview with <strong>Half</strong> <strong>Waif</strong>– Written by Paolo De Gregorio and Tucker Pennington Photography by Ally Schmaling for many people, is a constantly shifting notion. For others, it’s a place that’s “Home,” lost, temporarily or maybe permanently. <strong>The</strong> concept is geographical at heart, but it’s built through the elapsing of time and the crystallizing of feelings over time. It involves reoccurring perceptions, acquired habits, people and our feelings for them, a sense of safety and shelter. 18 the deli Summer <strong>2018</strong>

With its frantic pace, New York City challenges this notion. Neighborhoods change rapidly, old buildings vanish and beloved shops are replaced by new ones we don’t care about. Most friends and neighbors don’t settle here for good—they prematurely move back to their old homes as soon as the city’s dynamism starts to prove exhausting. Because of all this, New York is a very flawed “hometown.” Maybe that’s the reason why <strong>Half</strong> <strong>Waif</strong>’s Nandi Rose Plunkett, a New Yorker from 2012 until 2017 (via Massachusetts), felt the need to define what home is through her music. On her latest LP Lavender, she explores the gestalt of home through painfully beautiful songs. While the Big Apple lacked the elements to become a feasible home for Plunkett, it still provided a basis for this creative era in her life: “<strong>The</strong> five years I spent in New York gave me so much. I was galvanized by the people around me making exciting art, and I learned what it felt like to want to quit but then to keep going. With all its challenges, living in the city made me realize just how much I love making music—there were so many opportunities or reasons to stop, but I could never give it up.” In 2017 Nandi Rose moved upstate, in a house surrounded by nature that resembles her childhood home. This sort of reclamation of both positive and negative memories covers a central part in the artist’s inspiration: “<strong>The</strong> withering described in “Keep It Out” is the nightmare fear of boredom, dissolution, estrangement from the self, neglect, indifference: what happens to bad marriages, which I witnessed as a kid. In singing about it, I hope to keep those wolves at bay and create a different kind of life for myself. If we name it, we can know it, stare it in the eye, and shout it out of the realm of possibility.” Written during a period of discord when Nandi Rose was far from <strong>NYC</strong>, touring, and her grandmother’s health was failing, Lavender eschews traditional expectations of what a pop record can tackle. Churning synth swell and gestate as Plunkett’s poetic lullabies unravel in moments that are split between grief and hope. Ballads about confronting the unknown and creating an identity from those experiences are key themes delved into on songs like “Torches” and “In the Evening”. Constantly pushing the boundaries with their textures and the interplay between the instrumentation and her voice, each song refuses to settle into a singular mode of thought. like with “Silt,” I started with that patch on my Korg Minilogue, and the sound told me where the chords would go, and the chords told me what the words would be, and the words told me how the melody would sound, and the melody told me where the drums would come in and out. It’s a dialogue between parts, and I just rush around trying to listen and translate as best I can.” With their sharp electronic production that elevates Plunkett’s heart-wrenching lyrics, the 12 tracks on the record represent one of the most consistent strings of quality songwriting and production we’ve heard in a while. <strong>The</strong>y were forged with the help of collaborators Adan Carlo and Zach Levine and under the supervision of producer/mixer David Tolomei. “This was the first time I worked on an album with a band in this way”—Nandy Rose admits. “<strong>The</strong>y were indispensable to the project. Adan recorded all of the bass and guitar, often using his array of pedals to create texture. Zack recorded the live drums at Dreamland Studio, and also performed some of the electronic drum programming. All in all, though, it’s hard for me to draw dividing lines saying “I did this, they did this” because the work was done so fluidly—a true testament to our friendship, which created a fun and easy collaboration, and the way David polished, shined, elevated, and illuminated the sounds in the mix seemed to me to be a kind of magic.” As she prepares for a run of shows in the States and Europe, the themes of the record continue to occupy her thoughts. “It’ll be weird to be there without my bandmates, but I’m also excited to challenge myself and see how I grow through this process. My grandmother lived in England for half her life, so I do find myself drawn to towns like hers across the pond. But I think I’d find it hard to leave the Northeastern US. For all of the homes I’ve made for myself through music and travel, this part of the world is the deepest home I know.” d <strong>Half</strong> <strong>Waif</strong>’s Synths “Sometimes it’s just one sound that dictates the whole thing— Korg Minilogue Nord Electro 5D the deli Summer <strong>2018</strong> 19