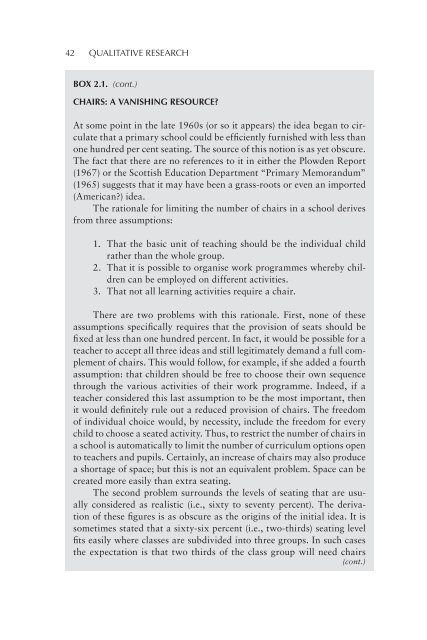 that a primary school could be efficiently furnished with less than

one hundred per cent seating. The source of this notion is as yet obscure.

1. That the basic unit of teaching should be the individual child

rather than the whole group.

2. That it is possible to organise work programmes whereby children

can be employed on different activities.

3. That not all learning activities require a chair.

There are two problems with this rationale. First, none of these

assumptions specifically requires that the provision of seats should be

fixed at less than one hundred percent. In fact, it would be possible for a

of chairs. This would follow, for example, if she added a fourth

assumption: that children should be free to choose their own sequence

through the various activities of their work programme. Indeed, if a

teacher considered this last assumption to be the most important, then

it would definitely rule out a reduced provision of chairs. The freedom

of individual choice would, by necessity, include the freedom for every

child to choose a seated activity. Thus, to restrict the number of chairs in

to teachers and pupils. Certainly, an increase of chairs may also produce

a shortage of space; but this is not an equivalent problem. Space can be

The second problem surrounds the levels of seating that are usually

considered as realistic (i.e., sixty to seventy percent). The derivation

of these figures is as obscure as the origins of the initial idea. It is

fits easily where classes are subdivided into three groups. In such cases